Mystery stuff is now 73 per cent of EVERYTHING

New data from looking at black holes has confirmed a theory that dark energy is accelerating the expansion of the universe.

The findings come from a research team that goes by the name of BOSS (Baryon Oscillation Spectroscopic Survey).

Scientists have used a technique of measuring the light emitted from quasars - dying galaxies with black holes in their hearts that emit huge amounts of electromagnetic radiation - to look back into the "adolescence" of the universe.

The new data explains one of the 20th century's most mind-blowing discoveries - that the expansion of the Universe is accelerating. 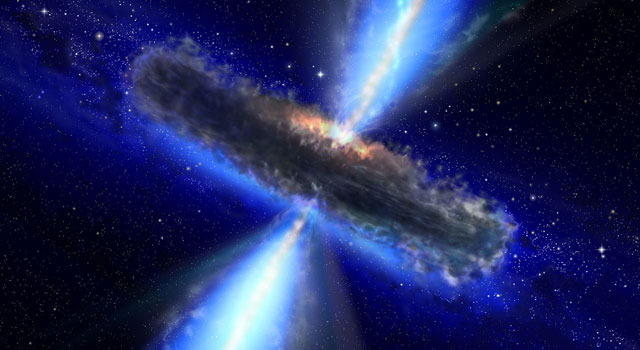 An illustration of a quasar, from NASA

The observations in this latest experiment - which is three years into its five-year run - have been gathered by 63 scientists from nine countries using viewings from the 2.5m wide-angle optical Sloan Foundation Telescope in the New Mexico desert. BOSS has submitted its findings to the journal Astronomy & Astrophysics

The teams measured light from 50,000 distant quasars as it passes through clouds of hydrogen in space on its way to Earth. By analysing the patterns of the light they were able to create a three dimensional map showing the position of the quasars as they were when the light left them 10 billion years ago. The map showed that quasars tend to cluster in ways compatible with the idea that pressure waves from the Big Bang left them in a distinctive formation. The spacing of those clusters can be used as a kind of yardstick to test distances in the universe.

Pulling together three-dimensional maps from these flickering points of light was a difficult task, Will Percival, a cosmology professor the University of Portsmouth told Reuters:

We're essentially measuring the shadows cast by gas along a series of lines, each billions of light-years long.

The tricky part is combining all those one-dimensional maps. The problem is like trying to recognise an object from a picture that's been painted on the quills of a porcupine.

According to the newly-reinforced theory, after the Big Bang, the universe expanded fast and dramatically, then at about 3 billion years old it slowed as forces of gravity acting on dark matter countered the initial impetus. Now it is seen to be expanding again, and scientists believe dark energy is the reason.

"We know very little about dark energy but one of our ideas is that it is a property of space itself - when you have more space, you have more energy," explained Dr Matthew Pieri to the BBC.

So, dark energy is something that increases with time. As the Universe expands, it gives us more space and therefore more energy, and at some point dark energy takes over from gravity to end the deceleration and drive an acceleration.