Smaller and simpler focusing and zooming in future cams

Scientists have created an artificial eye lens out of 800,000 layers of plastic that could revolutionise eye implants and aerial surveillance.

Based on research from 2008 published in journal Optics Express, the new plastic eye closely copies the structure of the human eye and other natural materials including tendons and butterfly wings. 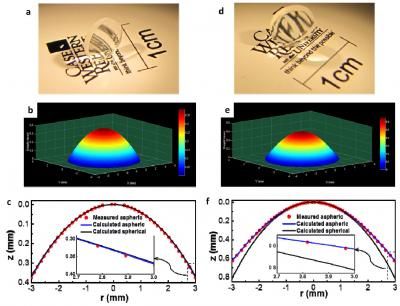 Polymer lens showing off its capabilities

Researchers at the Case Western Reserve University in Ohio, working with spin-off lab PolymerPlus, created the lens by stacking up layers of laminated plastic. Weighing a tenth of a traditional lens, the polymer version is up to three times more powerful and, crucially, had the capability to be flexible enough to incrementally change its refraction of light.

The new polymer lens can refract light thousands of different ways because each layer has its own refractive index. This multilayer lens design is called gradient refractive index optics, or GRIN optics. That contrasts to traditional lenses that have a single surface and a single refractive index.

This gradated refraction is much more similar to what takes place in the human eye.

The technique that allowed researchers to layer plastic so finely is called multilayer-film coextrusion: a 4,000-layer film is coextruded, and then 200 layers of film are stacked to create an 800,000-nanolayer sheet.

The stacking technique also affords much greater control for engineers over the overall refractive capabilities of the lens.

Michael Ponting, polymer scientist and president of PolymerPlus said they had been inspired by butterflies as well as human eyes:

Applying naturally occurring material architectures, similar to those found in the layers of butterfly wing scales, human tendons, and even in the human eye, to multilayered plastic systems has enabled discoveries and products with enhanced mechanical strength, novel reflective properties, and optics with enhanced power.

Applications of the new lens include lens implants for people with defective or diseased lens and much improved images in areas like aerial surveillance or medical cameras. ®