ROGUE PLANET WITHOUT A SUN spotted in interstellar space

In images, it doesn’t look like much: just a blue dot against the black of space. What’s exciting about this little planet is that it has somehow manage to escape its star.

Even getting an image of the object, dubbed CFBDSIR2149, is a pretty good trick: CFBDSIR2149 is only visible in the infrared, and then, only just (it appears blue in the image because methane in its atmosphere absorbs much of its longer infrared wavelengths, the ESO says).

Astronomers using the European Southern Observatory’s Very Large Telescope (VLT) in Chile worked with the Canada-France-Hawaii (CFH) Telescope in Hawaii to capture the image of the free-floating planet, which is around 100 light years away. The CFH instruments first spotted CFBDSIR2149, and the VLT was called on to examine its properties. 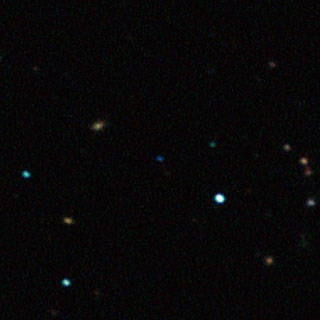 The faint blue dot in the centre is the rogue exoplanet.

While it doesn’t orbit a star, the ESO says it appears to be moving with a group of young stars called the AB Doradus Moving Group – which, if it’s not a coincidence, would hint at the object’s age and nature.

“This is the first isolated planetary mass object ever identified in a moving group, and the association with this group makes it the most interesting free-floating planet candidate identified so far,” the ESO says.

Although the lack of a nearby star makes CFBDSIR2149 very faint indeed, it does have an upside: characteristics such as atmosphere can be studied without a host star’s light getting in the way.

“Looking for planets around their stars is akin to studying a firefly sitting one centimetre away from a distant, powerful car headlight,” says the study's lead author Philippe Delorme of France's Institut de planétologie et d’astrophysique de Grenoble, CNRS and Université Joseph Fourier.

“This nearby free-floating object offered the opportunity to study the firefly in detail without the dazzling lights of the car messing everything up,” Delorme said.

“This object could be used as a benchmark for understanding the physics of any similar exoplanets that are discovered."

The astronomers believe there’s an 87 percent chance that CFBDSIR2149 is associated with the AB Doradus Moving Group, based on a comparison of images taken by the WIRCam instrument at CFH and the ESO’s SOFI camera.

If it is moving with the group, the object would be somewhere between four and seven times the mass of Jupiter, and is more likely to be a rogue planet than a failed star, the ESO says. Its temperature is estimated to be around 430°C (806°F) and its age somewhere between 50 million and 120 million years.