Ad firm frantically churns the content you gave it

A week after Facebook introduced the nauseating idea of automatic couple pages, it has been rolled out to users across the globe, inducing reactions such as: "creepy and intrusive", "retch-inducing" and "smug". 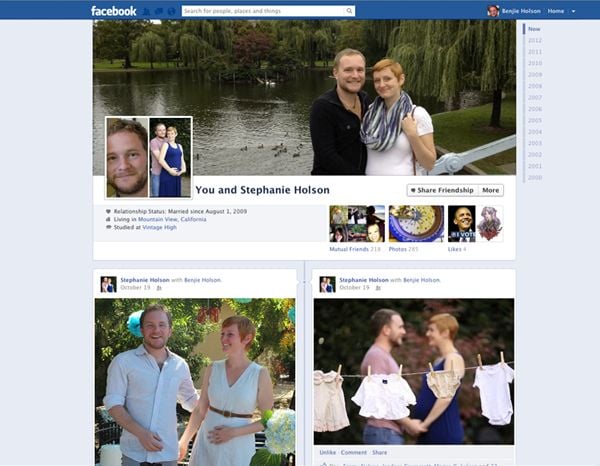 Here is your relationship

Facebook users who have listed themselves as "In a Relationship" or "Married" and linked their profile to their partner's will find that Facebook has automatically generated them a couple page, celebrating their love. The couple's page skims off a photo of the happy pair together as the profile picture, lists all events that the two have mutually attended and the Likes that they have in common. It shows all photos that both are tagged in and lists wall posts that each have put on the other's wall.

You don't need to be a dyspeptic technology hack to find this nauseating.

Yes, it's all data you uploaded, but it belongs to Facebook now, and there's not much you can do about how they remix and reuse it. The only way out of the couple page appears to be breaking up with your partner (on Facebook) or flat out defriending them. Breaking up with them on Facebook will send everyone in your friendship circles a notification that your relationship has ended next to a graphic of a broken heart.

With Facebook user sign-ups decreasing in the States and Europe, and shareholder interest increasing, in an angry why-has-the-share-price-fallen-so-badly way, Facebook are pulling tricks out of the hat but this does seem a flat move and wrests the power of "curation" from the hands of the actual users themselves.

"Friendship pages" have existed since 2010, and list all interactions between you and any given friend. In some ways Couple Pages are just a slight tweak to that format with added information about when you changed the status of your relationship and the distinction of a particularly twee URL Facebook.com/us but in others they're symptomatic of a twee, interfering, Coca-Cola-marketing friendly graveyard of web 2.0 that Facebook has become.

Go check how Facebook has celebrated your relationship here. ®