'Long Time Ago' and 'Far, Far Away' records broken by new GALAXY

I remember when it was all Big Bang round here

With the power of Hubble and Spitzer combined, NASA has spotted the most distant galaxy ever pictured, around just 420 million years after the Big Bang. 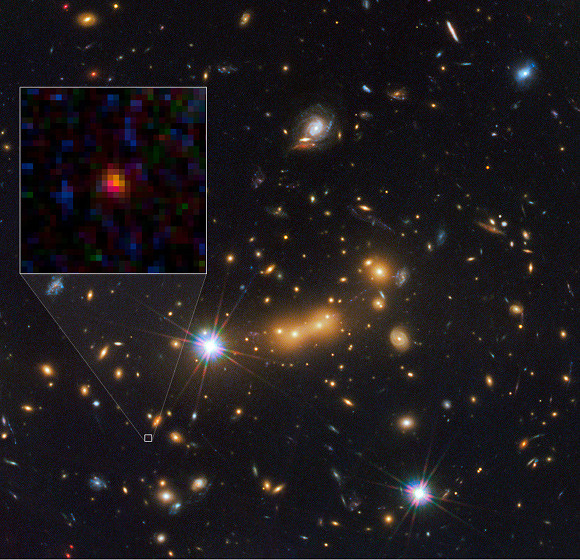 A new programme, known as the Cluster Lensing and Supernova Survey with Hubble (CLASH), uses the Hubble and Spitzer space telescopes and the natural gravitational lensing in space to "zoom" on the farthest reaches of the universe.

The distant galaxy is just a a tiny fraction of the size of the Milky Way, but it's a glimpse into the past, a snapshot of the universe at just three per cent of its current age of 13.7 billion years.

MACS0647-JD as it's been called, has been observed 420 million years after the Big Bang, meaning its light has travelled 13.3 billion years to reach Earth.

CLASH uses massive galaxy clusters as cosmic telescopes to magnify galaxies behind them and found MACS0647-JD because its light detoured around one of these clusters. The cluster's magnification powers allowed astroboffins to observe three magnified images of MACS0647-JD with Hubble.

"This cluster does what no manmade telescope can do," Marc Postman of the Space Telescope Science Institute (STSI) said. "Without the magnification, it would require a Herculean effort to observe this galaxy."

"This object may be one of many building blocks of a galaxy," said the study's lead author, Dan Coe of the STSI. "Over the next 13 billion years, it may have dozens, hundreds, or even thousands of merging events with other galaxies and galaxy fragments."

MACS0647-JD was observed using 17 filters spanning near-ultraviolet to near-infrared wavelengths, but it only appeared in the two reddest filters, tipping the boffins off to its potential age. They knew that a galaxy would only be this red if it was only shining at red wavelengths or if it was extremely far away and its light had been "redshifted" by distance.

After mapping the cluster's mass, the researchers concluded that redshift, which is a consequence of the expansion of space over cosmic time where ultraviolet and visible light are stretched into infrared wavelengths, was causing the galaxy's cluster. Coe estimates that MACS0647-JD has a redshift of 11, the highest yet observed.

The Spitzer telescope was key in coming to this conclusion, because if the galaxy just was red, it would appear bright in Spizter images. Instead, the galaxy was barely detected by the telescope.

MACS0647-JD is the second distance champion found by the CLASH survey. Earlier this year, the team announced the discovery of a galaxy that existed when the universe was 490 million years old, just a little off the new record. The survey has just five clusters left to observe out of the 25.

The full study of the galaxy will appear in the December 20 issue of The Astrophysical Journal ®.