Ready for the next tsunami

Nokia Siemens Networks, working with Ballard Power Systems, has delivered a cellular base station with an integrated hydrogen cell that replaces battery- or generator-based backup during a power outage.

The base station has been installed at DoCoMo's research site in Japan’s Yokosuka Research Park and can operate for 40 hours in the absence of mains electricity, with the hydrogen fuel cell delivering 4.5KW of electricity. The idea is to provide backup power, without needing the regular maintenance of a generator or taking up the space of lead-acid batteries. 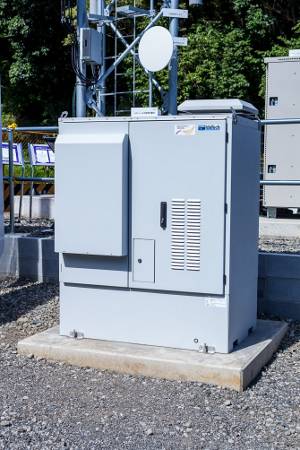 In the UK, most base stations only have batteries to keep them operational for an hour or two, and there's no obligation on the operators to keep infrastructure operational, but the Japanese tsunami focused attention on the question. Meanwhile, in the US, legislators are starting to wonder if battery backups shouldn't be mandated for cell sites.

US Senator Charles Schumer has written an open letter to the FCC chair asking that the regulator create a proper plan for keeping network infrastructure running in an emergency. His letter points out that a third of New York households rely exclusively on cellular networks, and that Hurricane Sandy knocked out a quarter of the cell sites it passed, mostly by cutting off their power.

Fuel cells can run base stations for a lot longer than batteries, though they'll still need somewhere to connect to. Both the Japanese tsunami and the US storm knocked out control centres, leaving base stations with nowhere to go even if they had been supplied with power, but recovery might have been faster if there had been a little more hydrogen in the mix. ®