Shift to 22nm and faster clock speeds for Bay Trail-T

Intel plans to release its first 22nm quad-core Atom system on a chip at the start of 2014, according to a leaked roadmap showing the new processor's specifications. 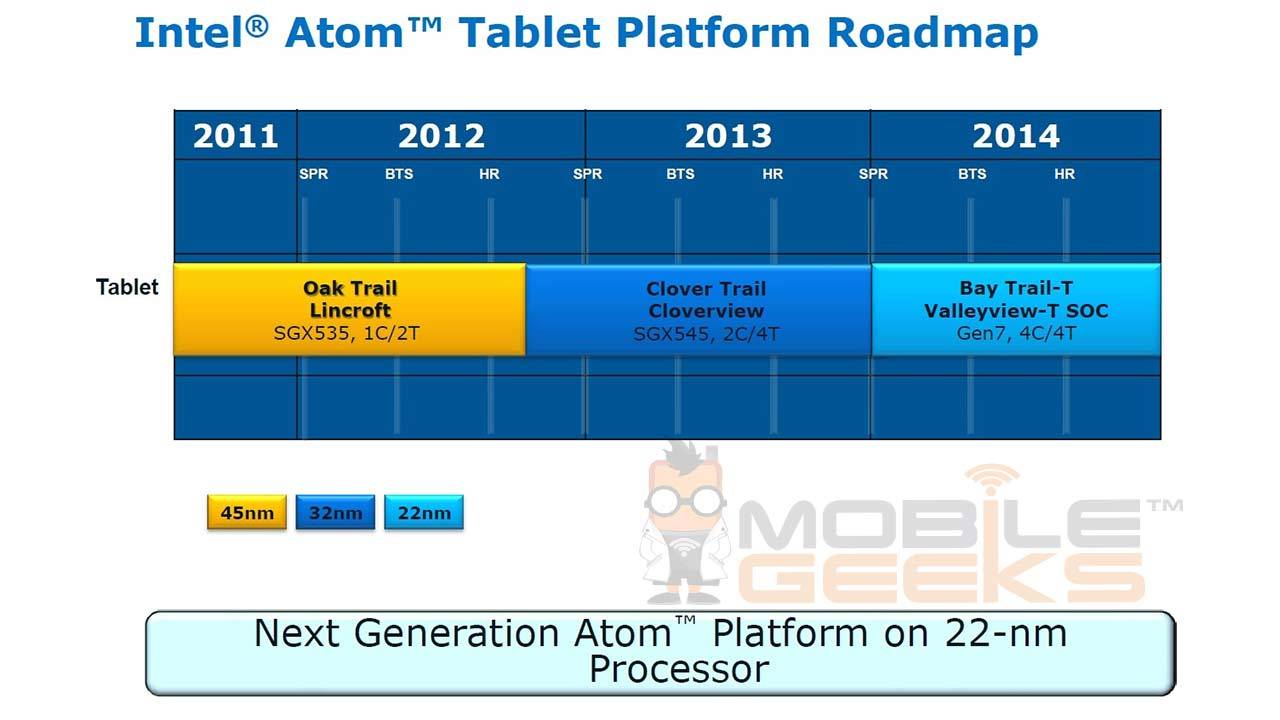 Bay View-T sees in the New Year (click to enlarge)

German tech blog Mobilegeeks.de got hold of the roadmap, which shows the current Clover Trail systems being replaced with the 7th generation Atom dubbed Bay Trail-T line. The new chips will run at up to 2.1Ghz, compared to Clover Trail's 1.5Ghz, giving a 50-60 per cent boost to general computing performance.

Intel has reworked its built-in graphics hardware to give a 3X boost in performance from the new chip design and Bay View-T will be able to handle DirectX 11, which is good news for the gaming community. 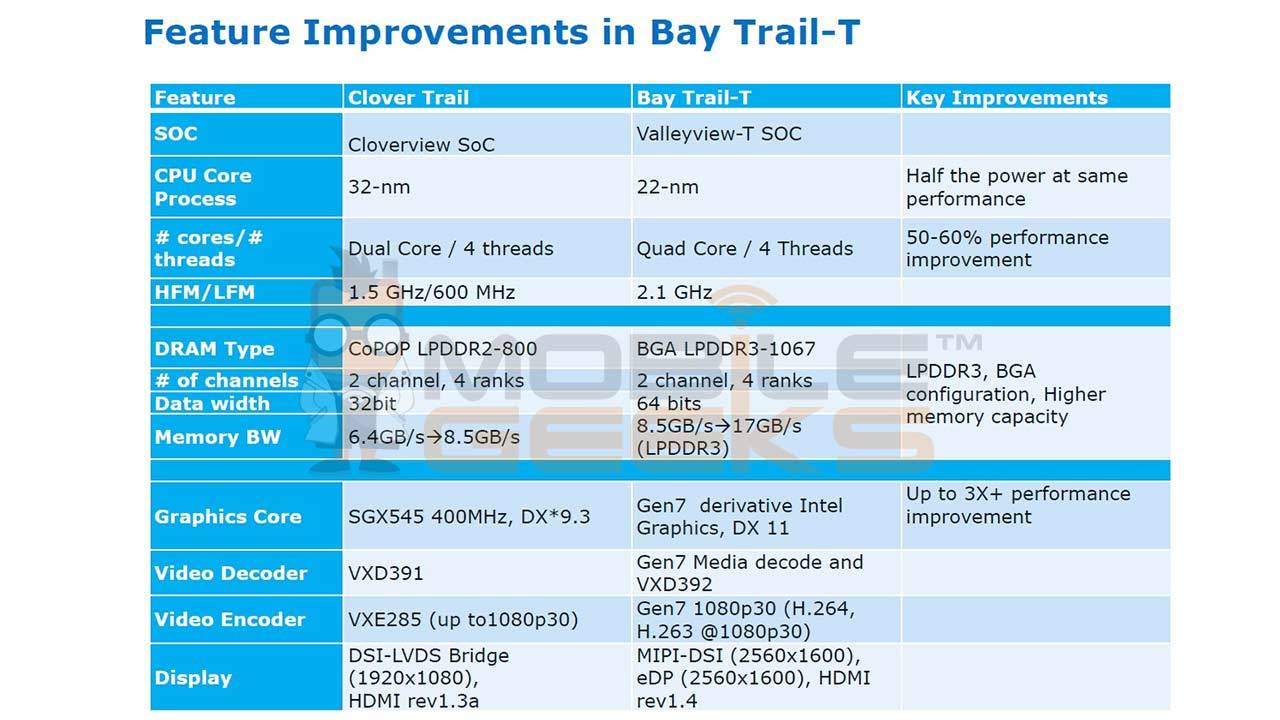 Bay Trail-T will also be the first Atom to support USB 3.0, as well as four USB 2.0 ports, up from a couple with Clover Trail, and can handle DDR3 memory with between 8.5 and 17GBps bandwidth on twin 64-bit channels.

According to the spec sheets shown, the move to four cores isn’t going to give any more threads, because Hyper-Threading has been dropped, but Intel is saying the power envelope for systems using the chip remains the same. It's saying the new design gives it around 11 hours video battery life on reference designs, up from nine hours, but standby time is cut from 30 to 20 days with the new chip. 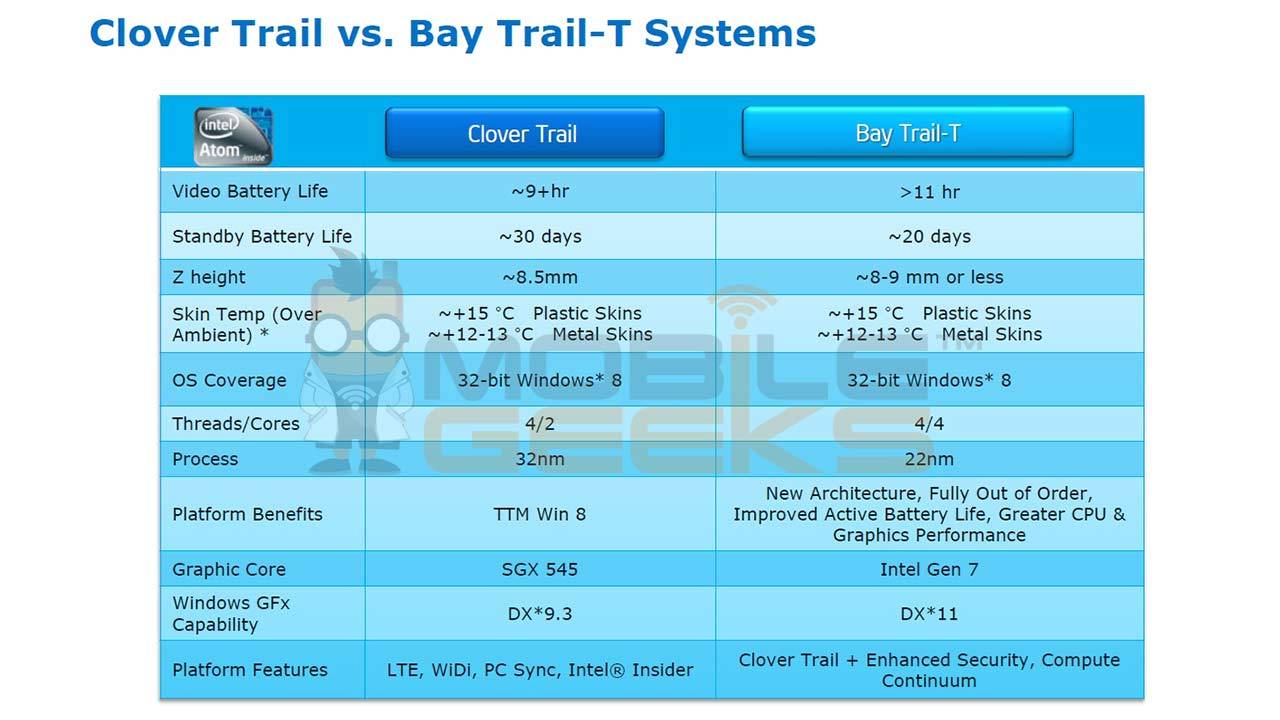 That last figure may sound odd; you might expect a longer standby period, but the new figure reflect the effects of Intel's 'Connected Standby' system. This keeps a certain level of processor activity and connectivity going when devices are asleep so that feeds, email, and other functions are loaded up when they are switched on.

The new Atom also looks to be the first of Intel's miniature processors to have security baked onto the chip as part of Intel's plans to integrate more of McAfee's software into its system. Chipzilla's anti-theft technology could also be built in. ®