How can the BBC be saved from itself without destroying it?

You are being manipulated and will thank your masters for it

Firstly, we need to put the seminar into a lengthier historical context. Roger Harrabin, who helped organise the confab and at the time was a BBC reporter, has explained that he had been given the job in the late 1990s of organising internal Beeb seminars. This is a fairly widespread practice: the idea is to invite in outsiders to broaden the knowledge of journalists who are focussed on the daily news agenda, as Boaden said herself a fortnight ago.

What's more relevant is what Harrabin and others hoped the seminars would achieve. Harrabin established an ad hoc outfit called the University of Cambridge Media and Environment Programme (CMEP) with young undergraduate Joe Smith - his own account is here. It was funded by a variety of organisations including Shell, activist group the WWF, and public money and academia. Harrabin receiving no monetary gain from CMEP, he says. 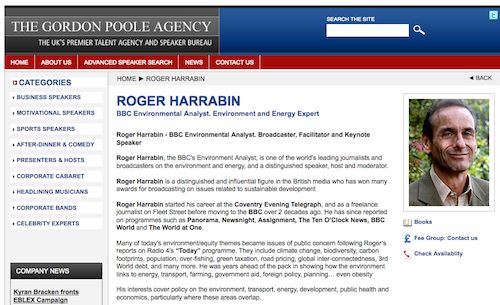 In September 2001 Harrabin asked one of his main funders, the Tyndell Centre at the University of East Anglia, for steers on the forthcoming Rio summit:

What should the BBC be doing this time in terms of news, current affairs, drama, documentaries, game shows, music etc? How can the BBC convey the theme of sustainable development to viewers and listeners who have probably seen all the issues raised before?

This is unusual. Drama, game shows and music are beyond the scope of the humble reporter. Harrabin was the protege of a fast-rising news producer Fran Unsworth - who this week stepped into Boaden's shoes. In 2005, the year of Hurrican Katrina and Al Gore's film An Inconvenient Truth, Unsworth appeared on a panel in The Netherlands alongside Channel 4 news star Jon Snow.

The subject of discussion, titled "What’s wrong with TV news coverage of global warming and weather", turned to manipulation of the audience. Snow asked why journalists could not weave the theme of catastrophic man-made climate change into their material more subtly.

Snow: Now, let us imagine that we send someone along with some brief to reflect the global-warming aspect of Stella McCartney's set of clothes arriving on the shelves in Oxford Street [and the] air miles to get the clothes from Taiwan, China, wherever, to the shelves. What was the cost in ozone demolition to get this stuff there speedily? It had to come by air because it was a quick new release of fashion, so didn't come by sea. Can you imagine a BBC newscast that, as a natural matter of course, reflects that the new Ford Fiesta has an environmentally destructive level of 0.89 per cent - or whatever?

Unsworth: I can, actually, to be quite honest. I think it would be an interesting approach, which I can easily see on Newsnight, and I think that we do that kind of thing quite often.

This is fascinating because the discussion is really one about the audience. It's a discussion on how to manipulate people by linking climate change to anything that moves, and it reflects several assumptions. One is that the audience will not be aware they are being manipulated.

Another is that viewers will respond to conditioning - a discredited behaviourist assumption. Behaviourism requires a desiccated view of what a human being really is, and it's a view that underpins pop-neuroscience today. It assumes the human is fearful, irrational and in need of constant nudging. This is reflected in another assumption: that what the audience really needs is conditioning - for their own good - rather than an understanding of a subtle and complex subject that will allow them to exercise their good judgement and make choices. 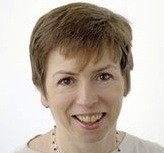 In 2006, the rising star Unsworth - by now head of BBC Newsgathering - promoted Harrabin over the heads of five environment correspondents at the BBC to a new post of environment analyst. She explained the move in a blog post that August. Meanwhile, Unsworth had support from the very top for presenting a simplified tale of climate change, its effects and an absence of uncertainty in the studies.

According to BBC veteran Peter Sissons, climate-change activist Al Gore "entertained the BBC’s editorial elite in his suite at the Dorchester and was given a free run to make his case to an admiring internal audience at Television Centre". Mark Thompson, when BBC director general, gave the most powerful backing he could. According to Fiona Fox, director of the Science Media Centre, which aims to improve science reporting in the UK: "One long-serving BBC journalist told me that Mark Thompson's supportive introduction to Al Gore on his visit to Television Centre to promote his climate-change film An Inconvenient Truth was unprecedented in BBC history.”

Before we look at the consequences of this over-simplification, let's examine why it would become such a costly mistake.

It's a fact that greenhouse gases, predominantly water vapour, keep the Earth from being hostile and cold; that CO2 albeit in trace quantities is also a greenhouse gas and therefore helps keep the planet warm; and that industrial society increases the amount of CO2 in the atmosphere. This is largely unquestioned.

Beyond that, however, the new field of climate science reveals a rich and complex picture that is poorly understood. Examine if you will, this IPCC summary. 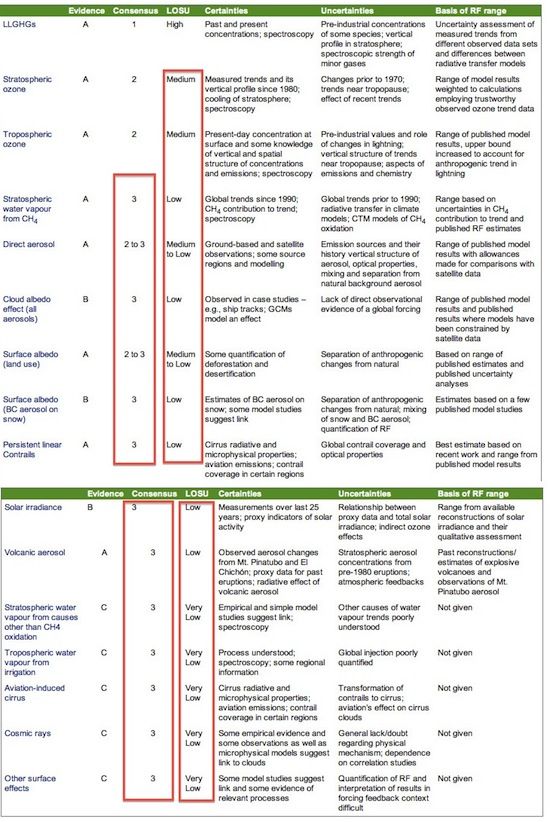 There are 16 factors that potentially affect the climate according to that report. Of the 16, 11 have a "low" or "very low ... level of scientific understanding", and only one is considered to have a "high" level of scientific understanding. The influence of ten of these factors has no consensus at all. Only one of the 16 is supported by scientific consensus. The environmental feedback effects of these factors, which may be positive or negative, are hotly contested. The output of computer models even more so.

For any science reporter, in normal conditions, this is all wonderful news. A succession of competing theories jostling for attention make for a rich stream of stories.

It's also worth noting that the leading "sceptical" scientists, such as John Christy and Henrik Svensmark, say the anthropogenic contribution - the man-made impact - accounts for 25 per cent or so of all the influences on climate. Many "consensus" scientists put it at 50 per cent.

This bubbling cauldron of opposing views is at odds with the BBC's desired simplification, and thus very little detail is mentioned. Let's recall one of the most overlooked aspects of the Climategate emails leaked last year - the pressure on academics to simplify and sex-up their work.

“What if climate change appears to be just mainly a multidecadal natural fluctuation?” mused one scientist. “They’ll kill us probably.”

“The science is being manipulated to put a political spin on it which for all our sakes might not be too clever in the long run,” one scientist, Peter Thorne, lamented.

“I can’t overstate the HUGE amount of political interest in the project as a message that the Government can give on climate change to help them tell their story,” a civil servant wrote in 2009 to climatologist Phil Jones. “They want the story to be a very strong one and don’t want to be made to look foolish.”

But it wasn't just civil servants and policy-makers who were asking for the story to be sexed-up and simplified. It was journalists, too.

The result of this over-simplification, of presenting climate science in childlike terms, was any intellectual curiosity about climate science was expunged. The question of degree - whether mankind's contribution was a little or a lot, whether it was manageable or harmful - simply disappeared from the discourse.

Sceptics are greeted with a witch's ducking-stool of a dilemma: if they float and survive then they must be a witch, and if they sink and drown then there was nothing wrong them. In other words, if they reject the alarmists, they're denounced as rejecting the uncontroversial effects of greenhouse gases. If they acknowledge the basic mechanics of the greenhouse gas effect, then it's assumed they back alarming predictions of Thermageddon. Heads you win, tails you lose.

It followed that anyone disagreeing with the simplified picture must either be mad or bad; so irrational that they rejected greenhouse gas theory entirely or too immoral to look at the consequences of a nailed-on catastrophe. This led to the almost complete disappearance of debate about policy.

This had some unintentionally comical consequences. For one BBC TV climate debate, a very rare one during Thompson's tenure as director general, the producers had lined up a group of self-professed sceptics. They then asked them if they thought mankind influenced the climate. Panic ensued when most of the sceptics put their hands up. Sceptics weren't supposed to say that - the simplified account didn't permit it. When given the opportunity, viewers were unwilling to be led to the ducking stool that Unsworth and Harrabin had prepared for them.

It also led to the gravest consequence: the removal of debate about which policies should be implemented, if any. This is best illustrated by a story.

Next page: Scientists are clever, they should tell us what to do - right?
Page: