A “return to the Moon” would need an almost unimaginable change in political thinking about the cost of space programs, but that doesn’t stop dreamers from dreaming.

A group of researchers that includes members from NASA, Caltech’s JPL, Lockheed-Martin and a handful of high-profile institutions have proposed a human return to truly deep space, by way of a project in which Lunar activities would be conducted by robots, controlled by humans orbiting at the L2 Lagrange point.

It’s put forward as a starting point to get humans back out into deep space – incidentally reintroducing America to a capability beyond Low Earth Orbit, something US space scientists yearn for. 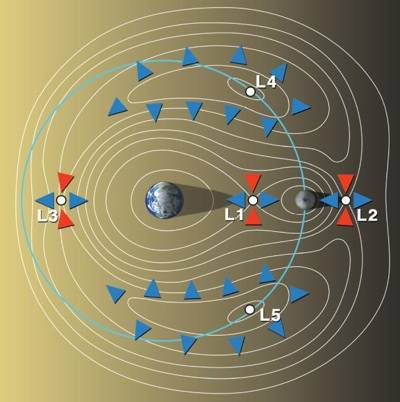 Earth-Moon Lagrange points: the proposal would station astronauts at L2 to control a rover on the Moon.

The mission the group proposes in this paper would happen in two parts: a rover would be launched on a lower-speed trajectory described as a “ballistic lunar transfer”, followed by astronauts travelling on an Orion spacecraft boosted by NASA’s heavy-lift SLS (space launch system).

The Orion would then take up station at the L2 Lagrange point, which would give it line-of-sight to the rover, which will have landed on the dark far side of the moon in the South Pole–Aitken basin. The Rover’s mission would be to collect rock samples from the impact basin – apparently an important location from a scientific point of view – and to deploy low-frequency antennae for a Moon-hosted radio telescope.

The researchers identify a region of the target area for the rover, the Schroedinger basin, as being 3.8 billion years old, and therefore able to yield good information about the evolution of the solar system.

The paper proposes that the radiotelescope part of the mission could be pre-built on Earth as antennas “printed” on polyimide films that could be unrolled from storage once in place. It would be designed to look for frequencies associated with “cosmic dawn” events – the earliest objects to “light up” in the universe.

Since the Orion is lunar-capable, the proposal states that the only modifications required would be for enough life support supplies to last a 31-day mission. At 65,000 km distant, the astronaut controlling the rover would be roughly 0.2 seconds away. ®

When a grain of sand moves fast enough to crack a mirror, it's best to put your back to the wind
Science21 Nov 2022 | 13