El Reg drills into why we need an ultra-accurate mass

Feature There's a piece of metal more than a century old just outside Paris causing men and women of science a lot of bother.

It's considered so important to the world it's kept on land designated international territory, so that no single country can claim it, in a maximum security vault maintained by the International Bureau of Weights and Measures (BIPM).

This smooth precious cylinder of alloy is preserved in conditions defined in 1921: the block is stored inside three glass bell jars, polished using a special mixture of alcohol and ether, and cleaned with pressurised steam prior to use. It can only be removed from its container, located on the outskirts of Paris, in the presence of an official from the French government among other select individuals.

It is the International Prototype Kilogram (IPK) and, as its name suggests, its mass is equal to the official definition of the kilogram in the International System of Units (SI). It was put to use calibrating weights soon after it was made in 1879, and was cast from an alloy of 90 per cent platinum and 10 per cent iridium.

The IPK was crafted by Victorians busying themselves with bringing science and engineering to the Western world. It was during a time when Thomas Edison was driving back the night's darkness with electric street lamps, the French were about to construct the Suez Canal, and telegraph networks connected far flung corners of America and Europe.

Fast forward to today, an era in which electronic chips have features mere billionths of a metre in size, and the IPK is no longer a pinnacle of precision: thanks to modern technology, scientists have found that its mass and the mass of its six working copies are changing.

SI units are the most widely used system of measurement for commerce and science. There are seven base units - the metre, kilogram, second, Kelvin, ampere, mole and candela - the kilogram is the only one still defined by a physical artefact. 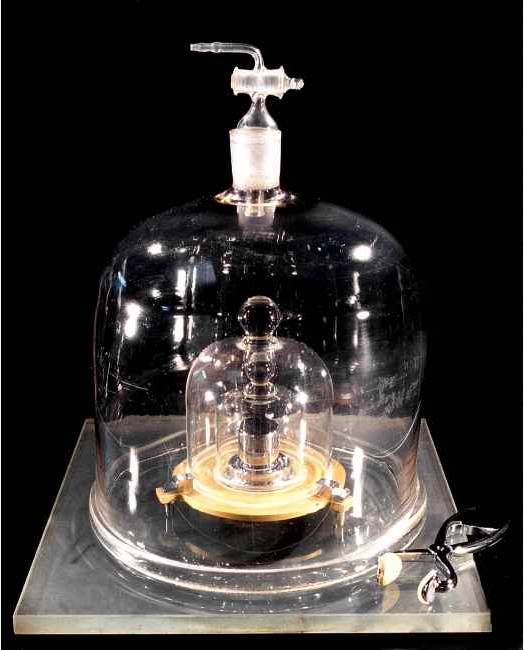 The official kilogram protected from contamination under three bell jars

Since the 1970s scientists have been working towards moving from a physical object to a kilogram based on fundamental constants of nature. This week, their efforts moves a step closer to fruition.

The key thing to grasp is that the kilogram is defined by a lump of metal locked away in a vault; we rely on it to calibrate the world's weights - and if it changes for whatever reason then scientists face a headache as all the world's kilogram weights drift ever so slightly from the official standard.

But if the unit of mass was defined as a mathematical equation, using a universal constant, then any number of kilogram weights can be precisely made, verified and calibrated without the original artefact.

Contrast this to the definition of, say, the metre: one metre is equal to the distance travelled by light in vacuum in a 299,792,458th of a second. The speed of light in a vacuum is constant, the above fraction is constant, the metre is therefore constant - there is no vault somewhere in the world with the official metre defined as the length of a plank of platinum-iridium alloy.

How are the world's top minds going to crack this problem?

On 21 and 22 November, experts from the around the world will gather at the BIPM at an invitation-only meeting to discuss how to define the new SI kilogram mass using using Planck's constant, which is used in the field of quantum mechanics. Another approach up for discussion involves counting the number of atoms in a 1kg sphere of material.

The debate follows an agreement at the General Conference on Weights and Measures (CGPM) - an international body that oversees metric units and directs the BIPM - to redefine the kilogram in terms of Planck's constant. This is a value that defines the ratio between the energy of, say, a photon of light and the frequency of said radiated light. The constant is about 6.626 x 10-34 joules second but with some chicanery it can be expressed in kilogram metres-squared per second, establishing a relationship with mass.

But there's a hitch: the constant's precise value is not known, and two key instruments used by scientists to calculate Planck's constant don't agree and can't as yet produce sufficiently reliable results. These instruments, called watt balances, determine the power required for an electric coil to support the weight of an object; this power - in joules per second - can be used to determine Planck's constant.

The difference between the measurements of the two machines is tiny; we're talking fractions of a grain of sugar.

One balance is installed at the Institute for National Measurement Standards (INMS) in Canada and the other at National Institute of Standards and Technology (NIST) in the US. Scientists operating the devices were set a target of eradicating the difference by 2015, but it's not clear they'll be able to do that.

Worse, more watt balances are being built elsewhere, which could further delay proceedings if they also produce readings that disagree with the others. That could push the project back to 2019.

It's vital for the results from the balances are as accurate as possible with a margin of error too small for anyone to detect or worry about.

Ian Robinson, a fellow at the UK's National Physical Laboratory (NLP) that built the watt balance for the INMS, told The Reg: "Our job is to make sure that nobody notices the differences - if somebody notices, we have failed and that's one of the reasons it hasn't happened until now."

Next page: Splitting a speck of dust
Page:

While enterprises are spending more on infrastructure than ever before, what goes up must come down
PaaS + IaaS17 Aug 2022 |

Scary in post-Roe America, and Poland, and far too many other places
Research17 Aug 2022 | 8

Precedent essentially meant that search results could be considered defamatory, which is dumb
Legal17 Aug 2022 | 26