Bifröst, the burning on-ramp to Valhalla, seen at last 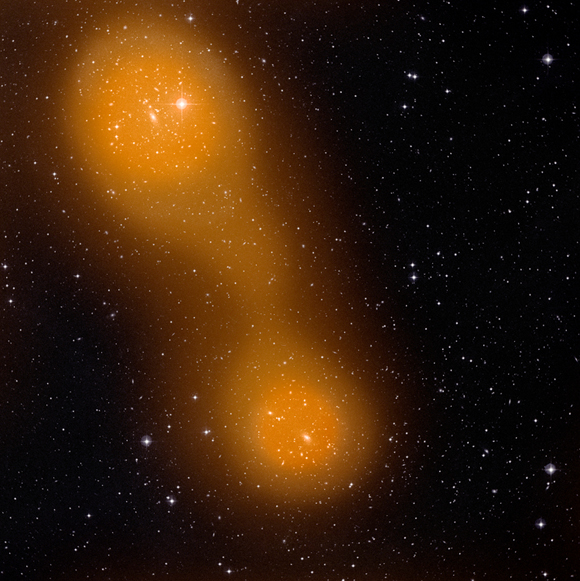 Planck tries to capture pictures of the ancient light of the cosmos, the Cosmic Microwave Background (CMB). This faint light tootles around the universe, and as it does, it runs into things like galaxies or galaxy clusters that are bound together by gravity.

If the CMB light then interacts with the hot gas permeating galaxy clusters, its energy distribution changes in a way predicted by boffins called the Sunyaev-Zel'dovich effect, named after the scientists who discovered it.

This effect is used by Planck by detect the huge cosmic structures knowns as galaxy clusters already, but it's also allowed the space telescope to see the faint filaments of gas that link one cluster to another.

Before now, the tenuous gas links remained mostly undetected. Astroboffins theorise that the filaments can best be spotted when the clusters interact with each other and the filaments are compressed and heated up.

This was how Planck spotted the bridge between clusters Abell 399 and Abell 401, a billion light years from Earth and each containing hundreds of galaxies. The possibility of the filament was first hinted at by X-ray data from ESA's XMM-Newton, but the new data confirms it.

The temperature of the bridge is similar to the gas in the two clusters, on the order of 80 million degrees Celsius and the gas in the link could be a mixture of the elusive filaments of the cosmic web combined with the gas from each cluster.

Planck will continue to probe galaxy clusters to figure out their connection to the gas of the universe, from which all groups of galaxies were originally formed. ®

Ancient Norse legend tells of Bifröst, a glowing rainbow bridge between our world of Midgard and Asgard, home of the Gods and location of Valhalla, the hall of the slain heroes. In the Poetic Edda, we learn that Bifröst blazes with flames. It will be broken at Ragnarök, the universe-ending battle between the Gods and the Frost Giants.

Some have theorised that the old Norse Bifröst may have been inspired by the Milky Way. The skalds surely were unaware of galactic clusters and the filaments linking them. But a superhot 80-million-degree glowing sky bridge connecting galactic clusters is evidently so fiery and stupendous in scale as to be even more like Bifröst.

Europe is falling behind in AI, we need to launch our second machine learning-powered satellite soon, says ESA

Hot on the heels of ɸ-sat-1, the space agency is planning to launch ɸ-sat-2

Sorry we missed you. Been binging on Netflix in the delivery van

Ariane 5 primed for second launch of year after trajectory cockup