OK iPad kids, let's see how you do on paper tape

The Harwell Dekatron – AKA The WITCH Computer - crunched its first calculations 61 years ago and was used to build Britain’s first nuclear reactors. It has been restored by The National Museum of Computing (TNMOC) at Bletchley Park.

At an unveiling ceremony following the rebuild work, one of the Dekatron's early users Bart Fosey, 85, raced the machine using a modern hand-calculator to see which completed its task first. The race was declared a draw.

Now students visiting TNMOC can build programs on a PC and convert the code to paper tape to be run on the cleaned-up computer. 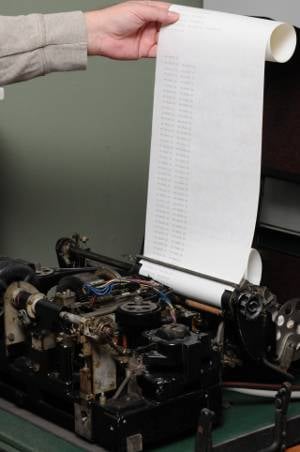 The paper tape output by the machine

“They get to produce something and then run their program on the actual hardware,” Kevin Murrell, the TNMOC fellow who restored the Dekatron, told The Reg. He explained the appeal of this old clunker: “Because the machine was never designed to be fast, we can follow its thinking.”

Murrell has something of a life-long relationship with the Dekatron: he first saw it in a museum in the 1970s. At the time the physics student was building his own computer kits, and eventually defected to computing.

TNMOC is regularly visited by students who program its collection of BBC Micros, and with so many school groups coming through its doors it’s booked past Christmas. Now the WITCH refurb project will not just to save one of the first digital computers from the scrap heap, it will also inspire others as a hands-on exhibit.

When you think of old room-sized computers, your mind may turn to Colossus - the beast designed by Tommy Flowers that was used to crack the German military's encryption codes during the Second World War. A Colossus replica sits in the low-rise maze of war-era brick huts at TNMOC.

Or perhaps you may think of the US Army’s Electronic Numerical Integrator And Computer (ENIAC), considered the world’s first general-purpose electronic computer. It was designed and built around the same time as the Dekatron, and used to calculate missile trajectories; it was also operated by a team of women whose job title was “computer” – a first in a sector then, as now, dominated by men. The last living member of the pioneering team was Jean Bartik, who died last year.

The restored Dekatron is not a replica: it has been rebuilt from original parts and its use by visitors is encouraged - unlike the ENIAC on display at the Computer History Museum in Mountain View, California: you can look but you can’t touch that monster – it’s for display purposes only.

The WITCH is a simple beast. Rather than follow the architects of ENIAC and build a general-purpose computer, its creators kept it simple: they built a 2.5-ton calculator that ate numbers and spat out answers.

Of the original Dekatron team, Ted Cooke-Yarborough designed the electronics; Dick Barnes made the relays, and control and timing electronics; and Gurney Thomas created the Dekatron memory.

“This was purely a mathematics machine,” museum spokesperson Stephen Fleming told The Reg. “It’s the number cruncher of its time.” 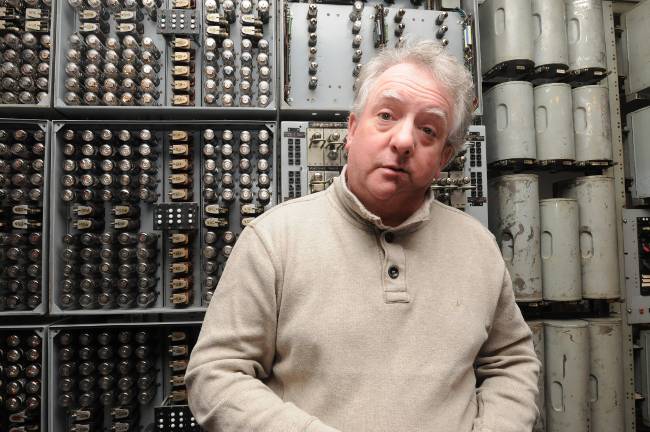 Dekatron man: Murrell with the machine he helped rebuild

The Atomic Energy Research Establishment - known simply as “Harwell” after its base near Harwell, Oxfordshire - commissioned the cruncher to automate the boring work assigned to a team of six university-educated mathematicians pounding Brunsviga calculators, who could easily make mistakes.

The machine was used in fundamental research and to design early power stations producing electricity for the national grid, including the Calder Hall nuclear plant. It calculated properties such as the ideal thickness of the nuclear reactor’s concrete housing.

A simple division would take the Dekatron more than 10 seconds to complete, but speed was never the issue - as proved by this Tuesday's test. Reliability was the problem.

The Dekatron isn’t unique. It’s a relay computer not unlike the Imperial College Counting Engine from the same era and the German Z3 in 1941. What helped it stand out, though, was its particular use of electronic components made of gas-filled glass tubes that could count to ten.

These Dekatron devices were in use from the 1940s until the 1970s for computing, calculating and frequency-division jobs. Each Dekatron is packed with a ring of paired electrodes that emit a soft neon light when powered up. The electrodes light up in sequence every time an input signal is detected, producing what looks like a moving dot that completes revolutions inside its tube; one revolution indicates 10 electrical pulses have been received. Each electrode pair is twinned with a cathode that outputs a signal when the electrode is lit up. These signals can feed into other tubes as input pulses, thus building up a chain of counters and frequency dividers.

Next page: Storing information in an age when filling ram sockets was an entirely different business
Page: