Space rock was flung to Earth after asteroid strike

All the boffinry world is alive with speculation as to just what the as yet unnannounced "one for the history books" discovered by NASA's Mars rover Curiosity might be. But a recently-published study may offer a clue.

In the investigation, researchers from NASA's Johnson Space Center, the Carnegie Institution and the Lunar and Planetary Institute compared water concentrations and hydrogen isotopes in crystals within shergottites - two meteorites that came to Earth from Mars as a result of an asteroid strike on the red world. Both were primitive, but one was relatively rich in elements including hydrogen although the other wasn't. 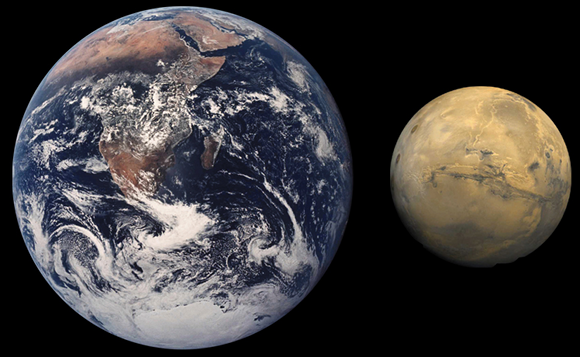 “There are competing theories that account for the diverse compositions of Martian meteorites,” Tomohiro Usui, lead author of the paper and a former NASA/LPI postdoctoral fellow, said. “Until this study there was no direct evidence that primitive Martian lavas contained material from the surface of Mars.”

"Usui revealed that the initial hydrogen isotopic composition of Mars was Earth-like, because he designed an experiment that greatly reduced contamination to the meteorite here on Earth,” said coauthor Justin Simon, a JSC cosmochemist.

One meteorite changed little on its way to the Martian surface from the mantle. The concentration of water in the rock was low, suggesting the inside of Mars is parched. The other meteorite had contact with the atmosphere and had ten times more water, suggesting that the surface could have been very wet at one time.

The full study is online at scientific database ScienceDirect.

NASA's keeping schtum until at least next month on just what the Curiosity rover's sample analysis unit has discovered to set its boffins in such a tizzy: but solid evidence of a watery surface on Mars in the past - though not as blockbusting as proof of life - would nonetheless be considered significant enough by the space agency that it would only make revelations after careful checks.

It could just be that Usui's meteorite study will be borne out by Curiosity's analysis. We'll have to wait and see. ®