Microsoft's decision to offer the Windows Media Center Pack for Windows 8 as a free download may be coming back to bite it, as software pirates have reportedly discovered a way to use the add-on to permanently activate pilfered copies of Windows.

The trick, as a few Reddit users discovered, involves activating Windows 8 temporarily via its Key Management Service, then using the Product Key from the free Media Center Pack to trick the system into thinking it's fully licensed.

Initially, Microsoft said that Windows Media Center would only be available as a paid add-on to Windows 8 Pro. Not even upgrade customers would get it for free, even though most editions of Windows 7 came bundled with it.

Redmond eventually bowed to consumer pressure, however, and began offering the Media Center Pack for Windows 8 Pro as a free download shortly after the Windows 8 launch, albeit only through January 31, 2013.

To get it, customers merely submit their email addresses to receive Media Center Pack Product Keys from Microsoft (one key per address). Upon receiving a key, they need only enter it into the new "Add Features to Windows 8" control panel to download and activate the Media Center components.

Unfortunately for Microsoft, however, this installation method appears to have an unintended consequence: namely, that it can turn unlicensed installs of Windows 8 into fully-activated, permanent ones.

The trouble stems from the fact that the Product Key you enter to activate the Media Center Pack isn't just an extra key that gets filed in the Registry somewhere. Rather, the Media Center key actually becomes your new Windows 8 Product Key, replacing the one you entered when you first installed the OS.

As long as your new Media Center Product Key is valid, it seems, Windows will activate permanently. And since the Media Center keys come straight from Microsoft, they're all valid. 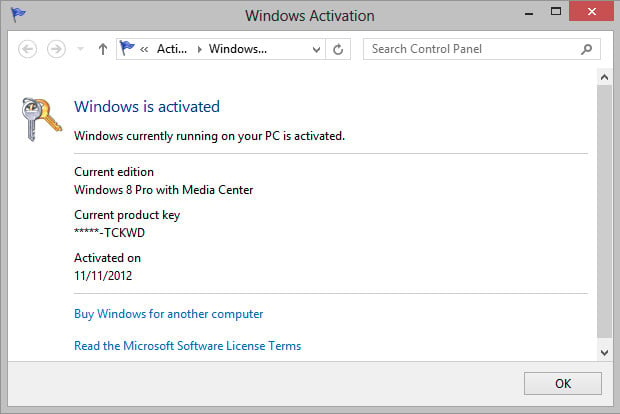 Windows 8 Pro with Media Center uses its own, unique Product Keys – which Microsoft is giving away

In theory, this shouldn't have been a problem. You can't use a Media Center Product Key to install a fresh copy of Windows 8; it only works from the Add Features control panel. To access the control panel, you have to boot into Windows 8. But unlike earlier versions of Windows, Windows 8 does not offer a 30-day grace period until it must be activated. You must activate it immediately before you can use it at all.

There is a loophole, though, and that's Key Management Service (KMS), an alternate activation method that allows Microsoft's Volume Licensing customers to activate large numbers of Windows systems remotely.

Ordinarily, KMS isn't a very effective way to pirate individual copies of Windows, because a KMS-based activation is only temporary. It's not too difficult for canny pirates to set up their own KMS servers to activate machines, but systems activated in this way must be re-activated every 180 days.

By using KMS to activate a copy of Windows 8 Pro, however, pirates can then reportedly access the Add Features control panel and use a free Media Center Pack Product Key from Microsoft to convert the temporary KMS activation into a permanent one.

It remains to be seen what measures Microsoft will take, if any, to block what seems to be an embarrassing and potentially costly bug. Invalidating Media Center Product Keys doesn't seem like an option, because many have already been used with legitimately purchased copies of Windows (and there's no way to know which is which).

A more likely option might be for Microsoft to end the free Media Center download offer prematurely. But even then, Microsoft had earlier promised that Media Center would be "an economical add-on" to Windows 8 Pro, which suggests that the upgrade might still be a way to dodge license fees.

Then again, some people will never pay anything for software, no matter what. Microsoft has already launched Windows 8 with aggressive pricing schemes, offering the upgrade to some customers for as little as $14.95. It may be that Microsoft figures those few who will use the Media Center hack to activate Windows aren't worth the effort to stop.

All of the above is just speculation, though. When contacted by El Reg, in keeping with its custom for such reports, Microsoft declined to comment. ®