Why did Comet fail? Hint: It wasn't just the credit insurers

If you can't bark with the big dogs, get off the porch

Comet's fiscal light was burning less brightly well before OpCapita entered its orbit, but the venture capitalist's involvement snuffed it out entirely.

Insurers and indeed suppliers got nervous and in 2008 Coface was the first to lower the level of cover it provided, yet others stuck with the retailing giant - at varying degrees. Comet certainly got credit, and trade supplier debt in 2011 stood at around £109m.

Electrical & IT retail are facing challenging times but when service levels drop and consumers stay away - or worse, get street-savvy and avoid dogged selling of extended and expensive warranties - just one or two big blows can be severely damaging, more so when there is added pressure to reduce costs by re-structuring stores and laying off staff.

Comet’s "additional" income from its financial services, extended warranty commissions and rents receivable (and these are calculated separately to direct sales) declined massively from a peak of £54m in 2008 down to a measly £185,000 in April 2011 – small wonder it was struggling.

Comet was successful in the early years, so much so that it moved into the store locations of former electronics giant Rumbelows when Thorn EMI called it a day in electrical and computer retailing. Other Rumbelows stores were sold to German PC retail chain Escom, which subsequently moved to bankruptcy and closure.

The problem was that Comet, like most other traditional electronics retailers, didn't move with the times. A quick look at the profile of London's Tottenham Court Road backs this up. Comet was caught out by lower-priced web rivals, and didn't have sufficient pull in-store to lure customers.

Kesa made efforts to turn business around by revamping stores, cutting headcount and adding new marketing concepts. These included a deal with Cashstar, the launch of the eGift card programme and an interactive app developed by Grapple Mobile to "enhance" the consumer shopping experience.

In the year ended 2011, Kesa also wrote off some £20m of long-term loans owed to it, converting this to equity. This and other write-offs in the year were clearly a case of house-cleaning for eventual sale.

Credit insurance and supplier credit was there, even if at lower levels and quite possibly secured through parent guarantees from Kesa. Once it became clear Kesa intended to sell the business, the stance of suppliers and insurers changed and cover may have been cut to a degree. When Kesa did sell - in November last year - cover was pulled totally, understandably so.

Insurers and suppliers complained of not being provided with fresh financial information or business plans moving forward by OpCapita, the buyers. Landlords faced with requests to cut or defer lease payments were also denied this information. 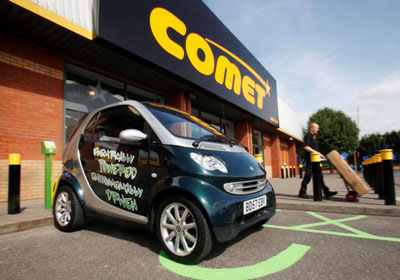 Real stakeholders - such as landlords, insurers and suppliers - which were given little or no information, clearly judged that OpCapita had no real sustainable business plan and withdrew their support.

OpCapita fails to convince the people who mattered

Turnaround or advisory firms are by their very nature less than transparent; some are successful and others carry the label of asset strippers, more so when track record is unfavourable and it's here that OpCapita failed the test to a degree.

It is linked to Merchant Equity Partners that failed spectacularly with the acquisition of the MFI Retail division out of administration a few years back.

Operational turnaround is the ability to spot immediate return and further gain in re-energising a troubled business and selling it on. Some focus on struggling firms for a quick killing and any subsequent turnaround is merely a bonus, if it happens.

OpCapita purchased Comet for a notional £2 and was handed a dowry of around £50m from Kesa, effectively covering potential extended warranty liabilities. This seemingly went straight up into the acquiring holding company and not directly back into Comet’s coffers. It managed to trade on restricted credit and no insurance cover by reducing inventory substantially, but could only do this for a limited period of time.

Empty shelves at Christmas never looks good for any retailer.

Funds injected into Comet (precisely how much is not clear) were secured by debentures and charges registered in February and March 2012 in favour of Hailey Acquisitions Ltd, a company incorporated in November 2011 and also PNC Business Credit, a trading style of PNC Financial Services UK Ltd with an ultimate parent company PNC Financial Services Holdings Luxembourg SARL. PNC is an asset-based loan facilitator to UK mid-market companies.

A further debenture was offered to Barclays Bank with that of Midland Bank (previous bankers) being satisfied fully. Not surprisingly, the debentures in favour of Hailey Acquisitions and PNC were partially satisfied on the 27 October, a week or so before administrator Deloitte was appointed. On the same day, a new legal charge over a specified bank account was registered in favour of distie Micro-P, clearly an effort to secure fresh trade supply exposure.

OpCapita brought in former Dixons bigwig John Clare to provide a measure of comfort to suppliers, which was important, while incoming investors intently set about securing their own risk.

The VC has made numerous acquisitions, but MFI and now Comet have failed. OpCapita also took over Game Group, acquired out of administration - coincidentally at a reputed cost of £50m some two months after the acquisition of Comet...

Game Group reported a pre-tax loss of some £54m for the six-month period to July 2011 - and also was not covered by credit insurers.

So with potential Comet investors facing down OpCapita's fairly poor track record and, more importantly, its lack of transparency in terms of funding, financial information and business plans, the blame for Comet's failure may lie closer to the VC than the credit insurers.

Hiring reputable people as CEOs to simply talk to insurers and suppliers is not enough. They want 100 per cent clarity and real indication of investment and plans moving forward. This has to be visible, tangible and proven, not hearsay.

Limitation of cover hurts, but faced with worsening performance and financial strength, what lender would not cut their exposure? Retail has suffered immense losses in recent years - first Woolworths, then Peacocks, Zavvi and Focus DIY and now Comet - but it really is down to these businesses to work hard in halting worsening performance, showing above all transparency and a will to work with primary external stakeholders to ease pressure and aid transition.

Successful business rescues are common but only work where confidence, clarity and quality of information sharing with required and relevant partners is evident. But none of these things was present with the acquisition of Comet.

If, as a supplier, you want to retain credit insurance cover over the years no matter what, you choose a policy that offers this and pay a higher premium.

Suggestions that OpCapita will come out of this making a profit carry validity, given what we know about the circumstances and the short time-frame between acquisition and failure of around nine months. This will undoubtedly leave a sour taste in the mouth of employees and unsecured creditors and the problem OpCapita has moving forward is perhaps one of image and reputation.

"Hailey’s Comet" sadly was destined to burn out faster than its planetary equivalent. ®