Presumably no mirrors in his house

Red Play Media bought up Adwords, and Bing equivalents, to place links alongside searches for "NHS Direct" or similar. Clicking on the advert brings up a nice big phone number which, if dialled, will cost the caller £1.53 a minute as it offers to read out the real phone number or put the caller through (at the £1.53-a-minute rate), which was enough to garner 15 complaints and trigger the fine.

All companies using premium-rate phone lines are required to register with PhonePayPlus, which regulates their behaviour and investigates complaints, though not always as quickly as one might hope. The sites being run by Red Play Media - callerhelp.co.uk and phonenumber.co.uk - had been garnering complaints since December last year, with The Guardian reporting on the scam, and naming the companies, back in March.

And the practice is still endemic - type "tax office number" into Google and you'll get two ads for fastphonenumbers.co.uk and easyphonenumbers.co.uk, both of which belong to Square1 Communications Limited and rely on the small print to keep them legitimate: 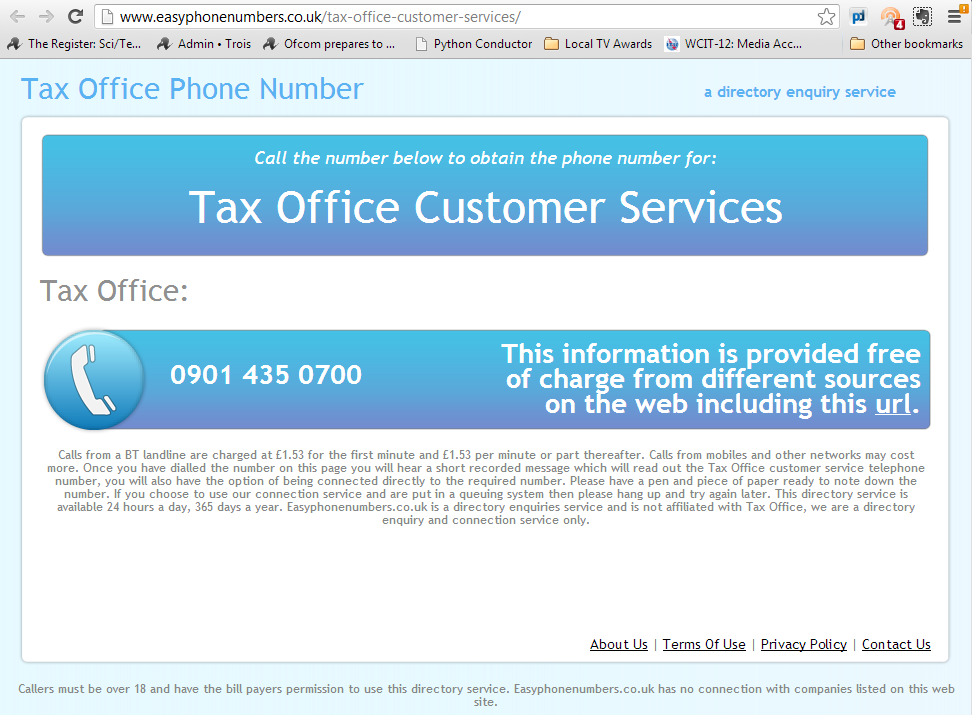 An entirely legitimate service for those who don't want to call 0845 300 0627... click for small-print-friendly version

Wayback Machine archives for the Red Play Media websites indicate the company wasn't always so assiduous about mentioning its rates, and the fact that it wasn't affiliated with the service being called, but any service generating customer complaints can trigger a PhonePayPlus investigation.

Red Play Media was not the only firm doing this, but unlike the rules-abiding Square1, which only targeted those seeking tax advice, Red Play Media bought Adwords for "NHS Direct" and various hospitals - which meant it was was deliberately targeting vulnerable groups who might not be thinking entirely clearly while Googling for emergency aid, also against the PhonePayPlus rules.

So thanks to PhonePlayPlus, those searching for a hospital - or Wonga.com (which Red Play Media also bought) - will be safe until the next buyer steps up, but those looking to call their local tax office should still dial with care. ®