BlackBerry 10: AWESOME. If the hardware matches it, RIM jobs are safe

Our Vulture fondles his way through the new OS

Opinion BlackBerry users have a love-hate relationship with their phones. The devices were often forced upon users rather than chosen. At the same time, the handhelds were the most usable and useful communications gadgets you could put in your pocket.

Yes, there are things a BlackBerry can't do very well or at all. But it is capable of doing so many things that its rivals can't match. You have to wonder if the rest of the phone industry has been taking some strange stupefying drug.

For example, the BlackBerry knows when it's in a holster. It knows when it's on a nightstand so it can do all kinds of "I'm in a nightstand now" things. You know what's "incoming" without taking it out of its case - you can tell that from the LED indicator. (Enthusiasts have written programs to allow you to set sophisticated 'Blinkenlights' sequences of coloured flashes, telling you in much more detail what is going on.) The obsession with usability extends to giving everything a shortcut key. You can set up a custom shortcut key to show you all the emails from Alice in the last three months, for example.

Nobody else does this. Has RIM replicated this in its new user interface for BlackBerry OS 10? We've already written up a quick preview of the QNX-powered mobile operating system - here's a follow-up hands-on tour of the kit.

First off, BlackBerry-maker RIM has acknowledged, or not forgotten, that getting to messaging fast is what the BlackBerry is all about. If BB10 has a "home" screen, it's the "Hub": a list of calendar appointments, and messages aggregated from SMS, email and social networks. Everything else is a kind of card-style overlay on this. Yes, there's a Palm-style app grid. Software can be put into folders, just like on Apple's iOS. 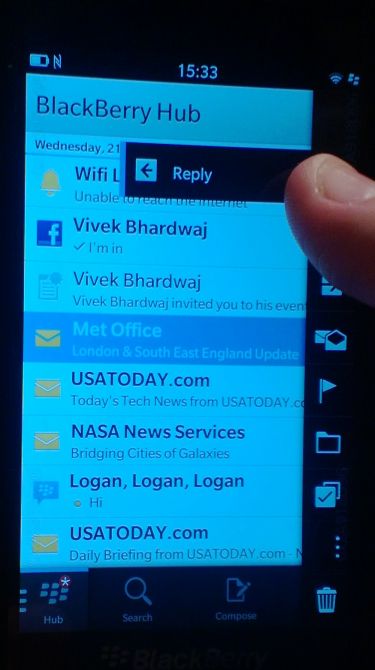 Here's the Hub. Icons to trigger common actions are down the right-hand side: 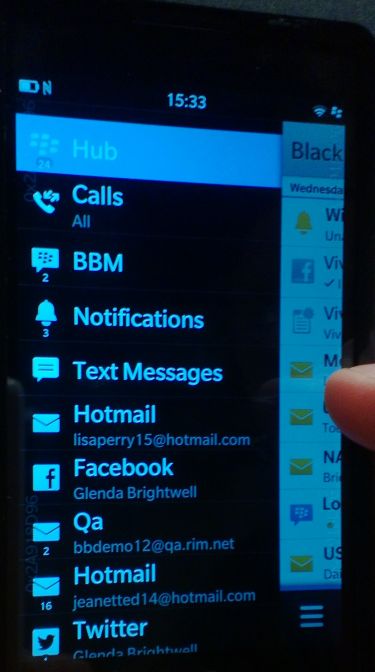 Anything new? A quick summary view is always a swipe away

Next page: Are you listening, Ballmer? Why can't your Windows mobes do this?
Page: