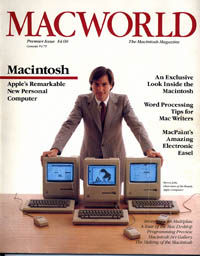 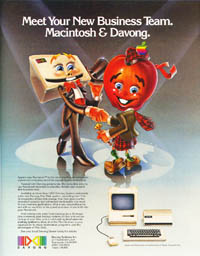 Macworld Premier Issue, February 1984:
As this ad for a 5-to-32MB Davong hard
drive shows, elegant design was not
a requirement in early third-party
branding efforts (click to enlarge) 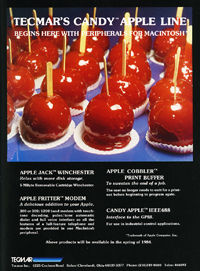 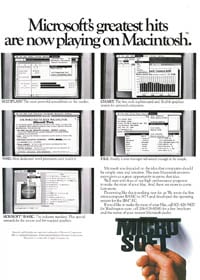 Macworld Premier Issue, February 1984:
'MULTIPLAN: The most powerful spread-
sheet on the market. FILE: Finally,
a data manager advanced enough to
be simple' (click to enlarge) 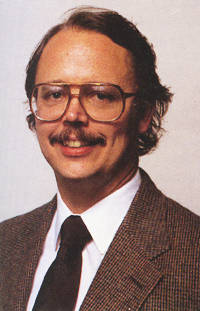 PCWorld, January 1985: We're not trying
to pick on publisher David Bunnell,
but we just had to note the glasses he
was wearing in his editorial photo –
trés au courant, 1985-style
(click to enlarge) 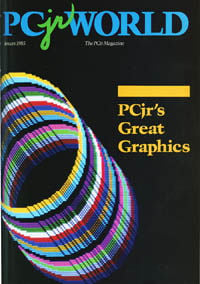 PCWorld, January 1985: IBM was trying
to move computers into the home;
PCWorld added a 15-page section
to try to help. It didn't last long

The Mac Moves In

On January 24, 1984, Apple introduced the Macintosh – or to use Apple's argot that eschews both definite or indefinite articles, Apple introduced Macintosh. Publishing house IDG, which had debuted PCWorld in March of the previous year, was prepared for the Mac's unveiling, and Macworld's Premier Issue hit newsstands in February.

Unlike Byte or even PCWorld, Macworld was decidedly less geeky than other computer magazines of the time – a reasonable editorial decision considering that the Mac was intended, as its advertising slogan suggested, to be "The Computer for the Rest of Us."

In his inaugural column, Macworld's editor-in-chief was positively effusive about the Mac and the brave new world it introduced:

Macworld Premier Issue, 1984 editorial by Andrew Fluegelman: Imagine how the fifteenth-century explorers felt as the first news from the recently discovered Western Hemisphere trickled back to Europe. That is the only analogy that approximates the excitement and wonder that I feel about the launching of the Macintosh computer.I confidently predict that the Mac will change forever our ideas about work and creativity – as well as the way we think about computers.

Despite his flowery rhetoric, Fluegelman was right – the Mac did change the relationship between users and their computers.

Macworld's teardown of the original Mac – yes, there were teardowns before iFixit came on the scene in 2003 – was equally positive, if a wee bit less flowery.

Macworld Premier Issue, 1984 hardware overview by Matthew Douglas: The Mac has been the subject of intense speculation in the past few months. The consensus was that Apple was about to win big or lose big. It's still too early to tell how the Apple marketeers will fare or what the competition will be, but one thing is clear: from a hardware viewpoint the Mac is truly a big win – rugged, fast, powerful, expandable, and affordable. A thoroughly marvelous design.The Mac is the most sophisticated computer ever offered in its price range and faster and more powerful than many machines that cost eight to ten times more.

By the way, for you trivia-contest geeks who confidently answer that the original Mac had a Motorola 68000 processor running a 8MHz, Macworld's Douglas would like to correct you: it actually ran at 7.8336MHz, he reported.

Microsoft's then-27-year-old Bill Gates also had kind words about a machine that he likely believed would increase his young company's revenue stream. He also inadvertently admitted that Microsoft had been overselling its own products.

Macworld Premier Issue, 1984 "Polishing the Mac" interview with Bill Gates: We've always promised people that they could simply buy a computer, turn it on, and use it. Even the Mac doesn't fulfill this promise, but it's a new milestone in terms of usability.The perfect machine will never exist, and the obvious difference between the perfect machine and the Mac is that you could ask for more memory, color, and a faster way to move data in and out of the machine. But when you look at price, you'll acknowledge that this machine is incredible.The Mac will be remembered as one of the great classic machines.

As might be guessed, Steve Jobs – who had famously flipped off the photographer who shot the cover photo for Macworld's Premier Issue – had good things to say in public about working on the development of the Mac and its importance to Apple.

Macworld Premier Issue, 1984 "The Making of the Macintosh", Steve Jobs: The Macintosh is the future of Apple Computer. For a very special moment, all of us have come together to make this new product. We feel this may be the best thing we've done with our lives.

Jobs was never much for understatement.

The following January, PCWorld's publisher reported on a subscriber survey which showed that even in the non-Mac world, the microcomputer was rapidly morphing into a personal computer that was not just for geeks, but for use in businesses and by professionals.

It was encouraging to note that the number of female subscribers (11.4 per cent) has almost doubled since last year's study.

Despite the gloomy predictions of the industry's economists, the personal computer market is obviously still going strong ... So much for the crash of '84.

Another indication that the PC was becoming more mainstream is the theme of PCWorld's January 1985 issue: "The Creative Side of Word Processing", which discussed how PCs were taking over from dedicated word-processing systems. The ease of document creation and modification, however, worried one contributor.

PCWorld January 1985 "New Dimensions in Word Processing" by Janette Martin: In an environment in which rewriting and editing are so facilitated by technology, the mark of an individual writer may well be diluted. Original creative efforts may largely be abandoned in favor of a new literature of compilation and collage.Advances to electronic word processing will continue to make rewriting as spontaneous and effortless as possible – and raise question we may not be able to answer so easily.

Speaking of questionable practices, personal investment-management was another use of the PC which was just getting started, years before the internet changed everything.

PCWorld January 1985 "Dialing for Dividends" by Michael Shapiro: ... now a new family of services currently in its infancy enables you to place orders from your home or office at any hour of the day or night.

Next Page: We magazine folk are here to help

Next page: We magazine folk are here to help
Page: