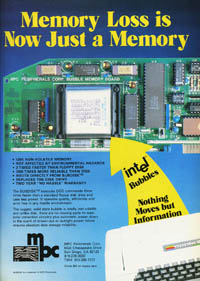 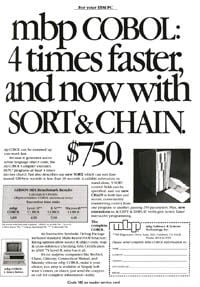 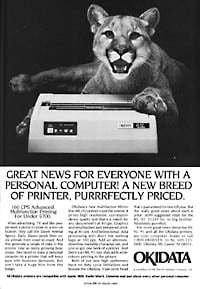 PCWorld, January 1985: Okidata 9-pin
dot-matrix printers made a different-
pitched sound depending upon which
character it printed. I once wrote
a text file that played The Star
Spangled Banner. Sort of...
(click to enlarge)

PCWorld, January 1985: It may now seem
clunky, but the Data General/One was
a fine machine. Why? It was 'The only
portable with a full-size 80 column
by 25-line screen' (click to enlarge) 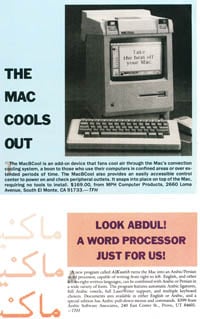 MacUser, January 1986: MacUser was
snarkier than Macworld; think The Reg,
not Cnet. In 1986, Macworld would
never begin an Arabic-software blurb
with 'Look Abdul!' (click to enlarge)

We magazine folk are here to help

As personal computing became increasingly mainstream, computer magazines continued to morph from places where the cognoscenti could converse amongst themselves about code snippets and big-picture industry trends into places where experts provided newbies with advice and recommendations.

Newcomer MacUser, for example, used its January 1986 issue to inaugurate its "First Annual Software Awards", which in coming years expanded to include hardware and industry luminaries, as well.

MacUser January 1986 "The Envelope, Please..." by the MacUser editors: Best Overall Program of 1985: Excel from Microsoft for many, many reasons. Its spreadsheet routines are superb and totally outclass any spreadsheet running on any system. Couple the eye-widening graphics and charting capabilities to that spreadsheet and if your proposal doesn't carry the day at the board meeting you have no one to blame but yourself.Best Desktop Publisher: PageMaker from Aldus can make you into a futuristic Gütenberg of even a William Blake.Best Peripheral Device: ThunderScan from Thunderware is an astonishing device that transfers images to the Mac by scanning them using a snap-in device that replaces the ImageWriter ribbon.

Two MacUser columnists were equally effusive about one Apple hardware release and another Microsoft application (this was years before the term "app" was commonplace).

MacUser January 1986 "West Coast Report" by Michael Wesley: This is a momentous occasion, an announcement of incredible proportions. The hard disk is nice, but the price is phenomenal!I love Apple products but I've always hated Apple prices. Now, suddenly, Apple has brought out an important new product at a sensational price. Thank you, Apple. Really. A great big joyous thank you.MacUser January 1986 "A Man and His Macintosh" by Doug Clapp: Word is my life. I love Word. I understand it; it understands me. Friends may come and go; Word just gets better and better.

In 1987, PC Magazine was less purely enthusiastic than was MacUser, mixing adulation with brickbats.

PC Magazine January 1987 "The Best of 1986 (And Some of the Worst)", introduction by Bill Howard: In dramatic lore they were known as Famine, Pestilence, War, and Death. In 1986 their real names were the RT PC, the PC Convertible, the CMI hard disk, and the PC-XT Model 286. IBM continued to hold the biggest market share in 1986, but it was a shrinking share as others bested Big Blue on price, innovation, and bang for the buck. It didn't help that many of IBM's new entries were clunkers.Nineteen eighty-six brought more and faster PCs and ATs: Compaq's Deskro 386, which leads PCs into the 32-bit era; IBM's belated boost from 6 to 8 MHz on the AT; and a can't-tell-the-players-without-a-scorecard flood of PC and AT compatibles from just about every Japanese company that ever built a TV, VCR, stereo, printer, radar detector, or LCD wristwatch.

PC Magazine was quite enamoured with page after page of other products, including:

Compaq Deskro 386: The numbers are straightforward: 20 per cent more money and 100 per cent more processing speed than IBM's best AT. And that's with today's DOS and applications programs. When the operating systems and software catch up, speed gains may be tenfold.Lotus Development HAL: [This] "natural language interface" to 1-2-3 translates brief, conversational phrases into commands to enter formulas, move or copy data, build graphs, sort databases, and write macros. Sounds a bit like artificial intelligence? It is.Zenith Data Systems Z-181 Portable PC: If you like reading in the dark and typing on marshmallows, the other squinty, murky boxes might do. But if you need a road PC you can really use, don't even consider anything other than the Zenith Z-181.

PC Magazine January 1987 "Brickbats" by editors of PC Magazine: IBM Corp., for introducing the PC Convertible in April with a modem that didn't follow the Hayes command set – and then not delivering that modem till September. For a laptop PC, a fast, compatible modem is about as important as a good, legible screen, which, come to think of it, isn't so hot on the Convertible, either. R.I.P.

Next Page: Geek roots not forgotten