IBM insider: How I caught my wife while bug-hunting on OS/2

No wonder that chkdsk flaw was never fixed

Part one The unholy alliance of IBM and Microsoft unleashed OS/2 25 years ago with a mission to replace Windows, Unix and DOS. Back then, I was a foot-soldier in that war: a contract bug hunter at Big Blue. Here’s how I remember it.

By cruel fate, an even crueller editor has decreed that a quarter of a century later I must write an article on whether you should still bet your career on Microsoft. And I am struck by the way that those who’ve not read history have condemned themselves to repeat it.

In the late 1980s, most PCs still ran one program at a time, although some were infested with Terminate and Stay Resident hacks that fought among themselves. Graphical user interfaces appeared on desktops - but Windows apps tended to screw with one another big time: even if you simply turned on a Windows PC and didn’t do anything further, there was a good chance it would crash all by itself.

Then preemptive multitasking operating systems that could protect apps from each other became viable on Intel chips, thanks to new microprocessor features and improved performance. The idea of a super-DOS arose and was quickly seen as having potential to deliver something more special, for which they needed me...

IBM was pathologically secretive. My job interview consisted largely of the manager asking “so Dominic, tell me about yourself” with no indication of what they’d want me to do. I’d been involved in Microsoft’s Intel x86 Unix, though not in any useful way, so I replied: “In some ways my work has been to make life hard for Microsoft.” The recruitment pimp had told me that IBM bosses usually “took their time” to make decisions, but this time the offer was on my answering machine before I got home.

So I turned up and was paid to do no work. I was in IBM UK’s lab in Hursley, near Winchester, but no one seemed to want me to actually do anything. I had signed a contract with a non-disclosure clause (which has now expired I should made clear), but apparently that wasn’t good enough. I offered to sign another one but no one knew where to get it.

Eventually this was resolved, and I was assigned a PC but not even given an email account to use because I was a contractor, an untermensch. The only way for me to get email was to pretend that I was the contractor who used to sit at my desk and so I used his ID for the next three years.

(As another example of my lowliness within the company, someone in a HR department somewhere somehow got it into their head that I was female. I’m not a pretty man, trust me on this, but I'm also not a Dominique. Moves were afoot to end my contract before I could claim maternity benefits - not even the sexism was competent.)

Dozens of man years were sucked up by penny-pinching arguments over expenses when programmers on the critical path were sent to the US to get OS/2 finished while housed in digs rejected by students. IBM management, of course, stayed in the same sort of accommodation that all Microsofties were put in regardless of level.

We’ll always have a trip to Hawaii, er, ish

Microsoft developers on the OS/2 team were promised a week in Hawaii if they got the thing finished and, of course, had share options. IBM tried to compete with a trip to the Azores, which wasn’t quite as good. It was irrelevant anyway because Big Blue's HR vetoed our prize on the grounds that IBM rules prohibited that many IBMers being on the same aeroplane.

Instead IBM HR came up with a plan that summed up the department's view of tech staff: a dinner dance. In Southsea. For our non-British readers this is not a glamorous location.

As a scumbag contractor I wasn’t invited, but since I was dating one of the seven women on the project, I went anyway and was impressed by the way IBM had tried so very hard to make the inside of a municipal leisure centre look like Hawaii. This is so crap that the integrity checks I’ve installed to watch myself for incipient senility keep flagging it as a false memory.

The only way I can force myself to believe the idea that the richest corporation on the planet behaved that way is that the girl who took me is now a reassuringly expensive lawyer who was kind enough to marry me and so we have photographic evidence.

(I wish to make it clear that I’m not saying IBM had the worst HR of any firm in the world, merely that my 28 years in technology and banking have never exposed a worse one to me.)

In that context it is a mystery as to how they hired people who were among the smartest and most pleasant IT pros I’ve ever worked with. Even the guy that both Microsoft and IBM developers referred to as the worst programmer in the world was easy to get on with. Shame that a few years later he died fighting for the Taliban.

Anyway, back to the technology. OS/2 was getting a hugely improved graphical user interface called Presentation Manager, an industrial-grade graphics library based upon IBM's successful GDDM, and plans were underway to include a proper database and host connectivity in the operating system itself. 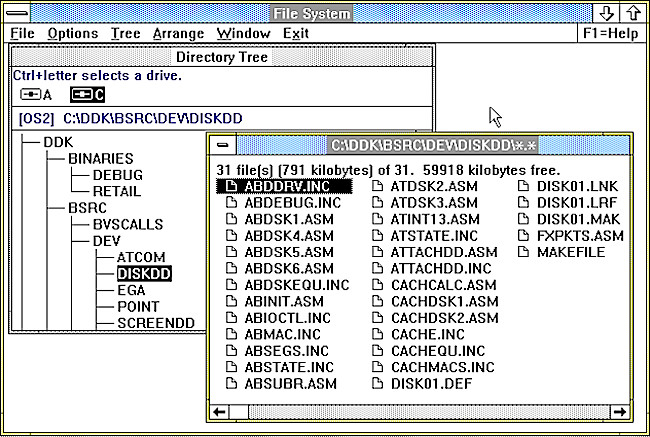 Something familiar about all this: OS/2's desktop. Credit: OS/2 Museum

OS/2 1.0 went out as a text-only super-DOS. What we saw as “real OS/2”, aka version 1.1, was released a year later and contained the super-doopa graphics support. We even had the shiny new VGA standard to drive it.

There was also a graphics markup language that allowed you to design sets of windows and attach dynamic code to the pages that could be downloaded from a shared directory. We thought that was cool and in the early 1990s we kept wondering if it could be made to do something special.

Next page: Testing was a concept Microsoft struggled with
Page: