Antarctic discovery: ALIEN LIFE may be FOUND ON MOON of Jupiter

Boffins reckon the evidence of live microbes deep in the dark, cold, briny depths of Antarctic lakes suggests that life may thrive in similarly hostile environments on other worlds and moons of the solar system - and beyond. 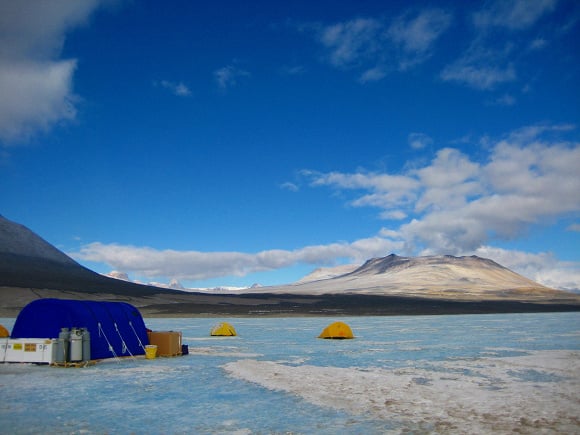 A zoo-o-boffinry team discovered an ancient colony in Lake Vida, Antarctica, estimated to have been isolated for more than 2,800 years. The amazingly tough Vidan life thrived in minus-13°C brine of more than 20 per cent salinity and swirling with noxious ammonia, nitrogen, sulphur and supersaturated nitrous oxide.

“It’s an extreme environment – the thickest lake ice on the planet, and the coldest, most stable cryo-environment on Earth,” Nathaniel Ostrom, zoologist at Michigan State University, explains.

“The discovery of this ecosystem gives us insight into other isolated, frozen environments on Earth, but it also gives us a potential model for life on other icy planets that harbour saline deposits and subsurface oceans, such as Jupiter’s moon Europa.”

Instead of depending ultimately upon the energy of the Sun like most Earthly life, the alien microbial life in the lake, situated in the northernmost of the McMurdo Dry Valleys, lives on the chemical energy released by hydrothermal vents at the bottom of the water. Such geothermal heat could be present at various far-flung locations in outer space, including the possible sub-icecap lakes or oceans of Europa.

The chemicals that would make life impossible for most creatures on Earth - nitrate, nitrous oxide and hydrogen gas - provide the energy to support the microbial ecosystem, possibly through chemical reactions between anoxic brine and surrounding iron-rich rocks.

“If that’s the case, this gives us an entirely new framework for thinking of how life can be supported in cryoecosystems on earth and in other icy worlds of the universe," says lead boffin Alison Murray of Nevada's Desert Research Institute.

The study was published in the Proceedings of the National Academy of Sciences in the US. ®