'Could be a whole arcade out there,' says NASA boffin 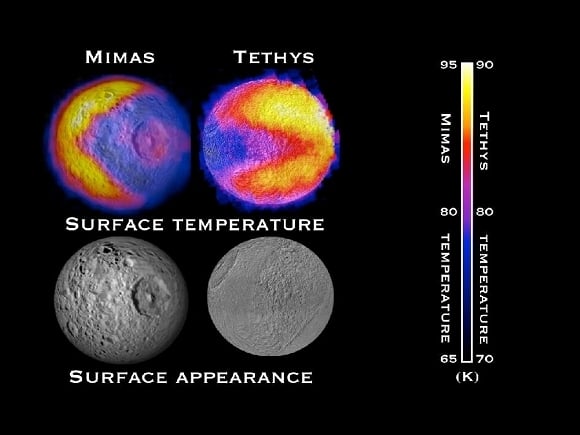 Cassini already spotted the Pac-Man thermal shape on the Mimas moon in 2010, and this second shape - found in Tethys, one of Saturn's 62 icy moons - shows that warmer areas in this pattern could be pretty normal for moons.

"Finding a second Pac-Man in the Saturn system tells us that the processes creating these Pac-Men are more widespread than previously thought," said Carly Howett, lead author of a paper on Tethys.

"The Saturn system - and even the Jupiter system - could turn out to be a veritable arcade of these characters."

In the Pac-Man shape, the coldest part of the moon is in the mouth shape, while the surrounds reach a warmer temperature.

Boffins theorise that this happens when high-energy electrons bombard the low latitudes of the moon on the side that faces forward as it orbits, in this case around Saturn. That bombardment turns a small area of the moon into hard-packed ice, which can't heat as rapidly in the sunshine or cool down as quickly at night.

Finding the shape on Tethys proves that the electrons can dramatically alter the surface of an icy moon, even one that's also being hit with icy particles from Saturn's sixth-largest moon, Enceladus.

"Finding a new Pac-Man demonstrates the diversity of processes at work in the Saturn system," said Linda Spilker, Cassini project scientist at NASA's Jet Propulsion Laboratory. "Future Cassini observations may reveal other new phenomena that will surprise us and help us better understand the evolution of moons in the Saturn system and beyond."

Astroboffins spotted the Pac-Man on Tethys in data from September 2011, where daytime temperatures in the mouth were cooler by 29 degrees Fahrenheit. At Tethys, unlike Mimas, the pattern can be seen very subtly in visible-light images as well as infrared, where it shows up as a dark region. ®