'Harder on the inside, softer on the outside'

Eucalyptus Systems, the company behind the open-source cloud controller of the same name, has just rolled out the 3.2 release of its software. With its latest release, it is sticking to its cloud fabric knitting and ramping up its business and customer base, and it certainly needs to get on top of this, especially while OpenStack and CloudStack are stealing all the headlines and Amazon's eating up all the oxygen in the cloud room.

Once the dominant open-source cloud controller project, Eucalyptus has seen some big competition in recent years and the company has instituted an up-tempo coding schedule for the past year to better match that of the competition.

"Our releases in the past were much larger, came out slower, and were less feature rich," Marten Mikos, CEO at Eucalyptus, concedes to El Reg. But Eucalyptus is has been playing double-time to keep pace with other cloud controller alternatives. Mikos says these include OpenNebula, a cloud control freak from Europe that was established in 2008 and managed by C12G Labs; as well as OpenStack, backed by Rackspace Hosting and a slew of IT vendors; and CloudStack, backed by Citrix Systems.

This marks the third release put out by Eucalyptus in the past year, and Mikos says that the company is on track to get its 3.3 release out the door in April 2013.

With Eucalyptus 3.2, Mikos says that the software is "harder on the inside and softer on the outside." That includes the addition of a new dashboard and self-provisioning tool to make it easier to create and deploy virtual server images atop the Eucalyptus cloud control freak, and the installation process has been streamlined for Eucalyptus as well.

"We are softening the edges, making Eucalyptus easier to use, and increasing the reliability and agility of the product," says Mikos. "We believe that the main benefit of the cloud is agility and you have to have a product that lines up to that goal."

The lack of agility was one of the reasons why NASA teamed up with Rackspace to start the OpenStack cloud controller a little more than two years ago. NASA had previously been using Eucalyptus, and was also, like Rackspace, looking for a completely open-source alternative. Mikos says that it is ironic that Rackspace has its own special sauce it uses when it runs OpenStack that it has not open-sourced as part of the OpenStack project and adds that some of the management features that it keeps as proprietary plug-ins – and from which it derives its revenue – are no different in concept.

To increase the agility of Eucalyptus, the company has created a setup wizard called Fast Start that allows you to plug in an IP address range and answer seven questions about the cloud you want to set up and a prototype cloud is installed on your raw server and storage iron.

The 3.2 release includes a hardened version of the JBOD Storage Adapter, which was created for a number of large Eucalyptus customers and which puts an overlay atop your local storage that lets it look like Amazon Web Services' Elastic Block Storage (EBS). This storage adapter exposes EBS-compatible APIs for storage management and looks and smells like the real EBS. By the way, this storage adapter code is open source and rolled into the core Eucalyptus release. Further on the storage front, Eucalyptus now support's EMC's VNX series storage area networks. 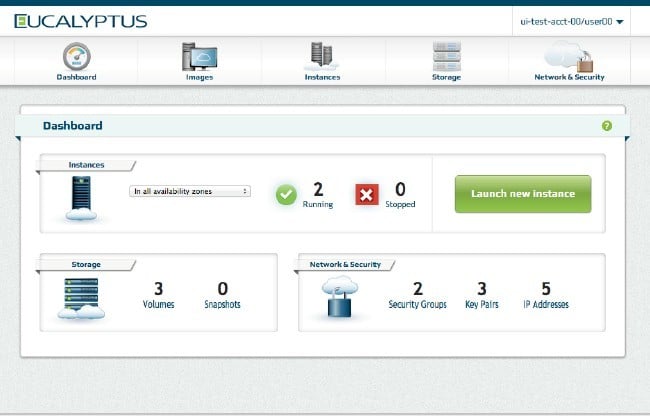 The new Eucalyptus user console is used to provision and manage compute, storage, and network capacity on a private infrastructure cloud. It also manages passwords and EC2 keypairs that are used to authenticate local virtual machine images, just as similar keypairs and passwords are used to allow access to virtual compute out on the real Amazon cloud. The console manages local EBS volumes and manages snapshotting of those volumes, too. The console can create user groups, elastic IP networks, and image catalogs for virtual machine deployment. On the server side, this console is coded in Python and uses Tornado as its app server, and on the client side it is coded in JavaScript and JQuery.

The update also includes better usage reporting for cloudy capacity, spanning compute, storage, and memory usage at the user, group, and cloud level. You can generate usage reports and export them through the new dashboard, the command line, or APIs. You can store this usage data in an external database if you want. Eucalyptus has also changed the logging framework in the code, which is now consistent across all Eucalyptus modules, and now allows admins to change the level of granularity of logging data on the fly, too. Eucalyptus 3.2 also includes a hardened node controller, which has been tweaked - so you can stress out the Linux kernel, the libvirt management layer, and other components on the node controller and Eucalyptus just keeps rolling.

Eucalyptus 3.2 will be available in December, and you will be able download it here. It costs $2,500 per server per year to get a support contract for Eucalyptus clouds for a standard support contract on a two-socket x86 server. If you want to use fatter servers or bump up the support to premium, you have to pay more. Eucalyptus 3.2 supports the KVM hypervisor from Red Hat and the ESXi hypervisor from VMware, but as you might expect, Eucalyptus Systems is focusing on KVM. The company has already created the code to support for Microsoft's Hyper-V but has not released it yet and Mikos says the company will when enough customers ask for it.

Eucalyptus, the company, has 90 employees and is not yet profitable, according to Mikos, and that is a factor of six growth since he took over as CEO in March 2010. One of the reasons that Eucalyptus is not profitable is that it is building a giant QA cloud to stress-test clouds running its eponymous control freak.

Eucalyptus has over 100 paying customers to date, according to Mikos, who says he has had particularly good traction with "TMT" companies – that's short for technology, media, and telecommunications. And these are not necessarily the biggest companies, he says, but rather the fastest movers. Mikos said that he didn't expect for the Eucalyptus business to resemble the MySQL database business he used to run (before Sun Microsystems and then Oracle took control of it). But, as it turns out, Eucalyptus is similar in the types of agile and somewhat smaller projects it is being used on, he says.

"We have seen our best opportunities with companies with rapid growth," says Mikos. "Our business is not about having the largest clouds, but about having many small clouds that are growing fast."

As for the much larger base of clouds based on the open-source Eucalyptus (and not using the proprietary plug-ins from which Eucalyptus gets its dough along with support contracts), Mikos says the company is seeing 1,500 new cloud starts per month and estimates that its cloud has an installed base of 100,000 downloads or more.

Compatibility with Amazon's APIs is a key differentiator for Eucalyptus systems, of course, which is enabled by a partnership deal that Eucalyptus inked with Amazon Web Services back in March. At the moment, Eucalyptus supports the APIs used in the EC2 compute and S3 and EBS storage clouds run by Amazon as well as its Identity and Access Management (IAM) service. "We will be doing more Amazon services in the future," says Mikos. "But Amazon is adding a lot of PaaS services that we might not add any time soon." ®

If someone tries ransacking your Windows network, it's a bit easier now to grok in Microsoft 365 Defender