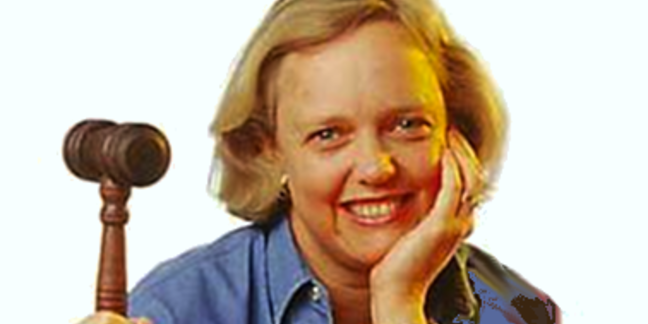 It was only a matter of time before stockholders got legal representation following last week's spat, when HP wrote-down $5bn related to the Autonomy buy, claiming that the Brit software maker had cooked its books prior to its acquisition by HP so as to pump up the sale price.

Autonomy's former CEO Mike Lynch then pulled off the gloves and came out swinging, claiming HP was trying to deflect attention from its execs' mishandling of his former firm and from weak quarterly results.

The inevitable class action suit was lodged in San Francisco by Robbins Geller Rudman and Dowd on behalf of "all persons" who bought HP common stock between 19 August 2011, the date the Autonomy acquisition was announced, and 20 November when the write-down was revealed.

"Defendants issued materially false and misleading statements regarding Hewlett-Packard's financial performance, business prospects and the status of its operating segments," the compliant alleges.

It added the defendants "concealed" that HP had bought Autonomy based on financial data that "could not be relied upon because of serious accounting manipulation and improprieties".

HP last week claimed Autonomy had recognised revenues when software was sold to resellers as opposed to when customers actually bought it, and had mischaracterised low-end hardware sales as higher margin software.

The legal complaint alleges the HP execs had been "looking to unwind the deal in light of the accounting irregularities that plagued Autonomy's financial statement".

It also claims HP kept from public view a slide in the operating margins within Enterprise Services (the former EDS), which fell from ten per cent in 2010 to three per cent in April this year.

"As a result of false and misleading statements, the company's stock traded at artificially inflated prices during the Class Period," the lawsuit stated.

The file pointed out on 22 August this year when HP announced the write-down related to EDS its share price slumped eight per cent, it fell ten per cent after HP explained why this write down was necessary and then by 12 per cent on the day the Autonomy issue was confirmed.

The lawsuit is claiming class damages, legal fees and other relief as the court may deem "just and proper".

Industry commentators have questioned why HP needed to write-off a huge chunk of goodwill when the errors discovered did not seem to amount to more than $300m.

This lawsuit may not be the only legal battle HP is faced with as Mike Lynch said last week he will look to "have a few words" with CEO Whitman, face to face first but then potentially through lawyers. ®