Twenty-five years ago IBM unveiled its master plan to reclaim the PC industry. In November of that year the first floppy diskettes of OS/2 version 1.0 trickled out. Microsoft had co-developed the software with Big Blue. The world would look very different if the plan succeeded. And the world was already changing significantly. It was 1987.

Today OS/2 is remembered not for what it was, but for its role in an industry war that saw Microsoft emerge triumphant. When OS/2 shipped, Microsoft employed 1,800 staff, fewer than shopping channel QVC employs in Liverpool today. Microsoft wasn’t even the biggest PC software company. But a few years later it was not only the dominant player in the industry, but the most valuable corporation in the world; the mere rumour of Microsoft entering a new market would cause panic among established players.

In keeping with El Reg tradition, I cranked the old software into life to see how OS/2 looks today. But it’s also worth posing the question once again: could IBM have won? If OS/2 was the reason Big Blue lost, could Microsoft have been stopped if IBM had come up with a smarter plan? But first, let’s set the scene, and go back to in time, to a world before ‘platforms’ and ‘ecosystems’, and remind ourselves what the IT industry looked like in the mid 1980s.

Primordial soup: The world in 1987

It was a fragmented universe, back then. The serious money was in old iron, in vertically integrated systems. IBM was the master of this universe, having just settled a decade-long antitrust battle. It employed 405,000 people in 1985 - equivalent to 12 Googles.

Digital Equipment, IBM's nearest rival, which sold half of the world's minicomputers, employed over 100,000. The centre of the IT industry was around Boston and upper New York State, reflecting the impact of Cold War-era government pork, and the enduring influence of MIT, the world’s leading engineering university in Boston, Massachusetts. The microprocessor had only just begun to have an impact, and this could be heard in the cry of "open systems". For the next few years "open systems" would become a marketing buzzword almost as ubiquitous as "the cloud" is today. Open systems meant Unix, and Unix meant Sun Microsystems – which was burning up the competition in the new networked workstation market.

That was the business market. Games and cool multimedia were the domain of strong 16-bit microcomputers, with Commodore’s Amiga and the Atari ST lines finding niches in audio and (later) video production. The strides they made and the amount of time they took to make them made Apple’s Macintosh look like an overpriced toy. The Mac was essentially just another Motorola 68000-based micro - a very well-designed one for sure - but technically inferior to the more sophisticated Amiga, and too weird for business. The Mac looked like it might sink Apple, but the Postscript language, Apple’s LaserWriter printer and PageMaker created desktop publishing, and gave Apple an unshakeable hold on a corner of the publishing industry.

Then there was the IBM PC. Crude, dysfunctional, uncool: the PC managed to combine the worst of all worlds. As a business machine it was far less capable than a Sun Workstation. And who the fuck wanted a PC in their home? As a multimedia machine it was non-starter; there were no sound cards, it couldn’t do anything except beep. 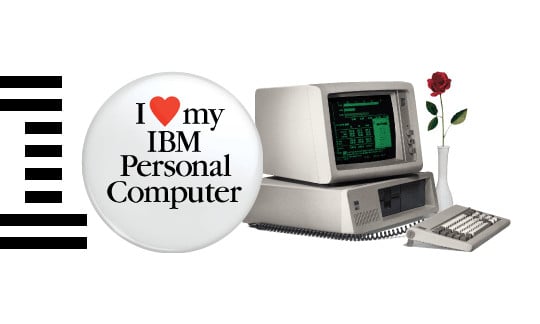 But the PC had one or two things going for it. Offices and departments could buy their own PC or clone, and start using a database or spreadsheet much more quickly, easily and cheaply. The alternative, of course, was to lease time from the company mini or mainframe, and go through the bureaucratic process of requesting that a software application be written or amended. As far as PCs went, there was choice of hardware, with multiple vendors selling "compatibles", or clones, and thriving dealer channels and training and support companies. The PC meant Novell for networks; SCO’s Unix (or one of dozens of now-forgotten species) for vertical back-office business applications; and for everything else, the biggest companies of the day - Lotus Corporation and Ashton Tate. The ubiquitous PC business applications – dBase, Lotus 1-2-3 and WordStar and WordPerfect - had their own "ecosystems". Trained users in the "ecosystems" provided a pool of skilled labour, macros and add-ins, and even serious, compatible products that produced charts or reports.

You may notice a couple of things missing. The idea of an "API" was unknown. The idea of a platform "ecosystem" - a multi-sided market - was unknown, because the "platforms" in the PC world back then were the applications themselves. DOS provided no API, merely interrupt vectors, invitations to cause trouble. On DOS, there was nothing out of the box to help you if you were an application developer. So if you had a new DOS software application, you needed to support all the peripherals yourself. If your customer had an HP LaserJet, or a swanky Hercules graphics card, you’d need to write the drivers; each application provided its own set. by 1989, WordPerfect had supplanted WordStar as the most popular PC word processor, partly because of its excellent driver support.

The "operating system" DOS was a misnomer: it was a boot loader. DOS had a crude 8+3 file system. There was no API to speak of - apps wrote anywhere and everywhere they could. And it was single-tasking, with task-switching possible only through crude third-party hacks.

So by the mid-1980s, IBM had two challenges. One was to fend off Unix and the Open Systems bandwagon and reclaim the PC for business and wind it back into the mothership. The second was to bring the PC into the modern era, which meant giving it multitasking, networking support, and the graphical user interface that almost every other system enjoyed. It did so in three ways – with a new software platform, a new hardware architecture, and a new TLA (Three Letter Acronym). With the hardware, the PS/2 range, IBM made the system bus proprietary in the hopes of licensing it to clones and add-in card vendors. Nobody wanted to know, however. Rather than making the rest of the world "incompatible" with IBM and therefore unattractive to punters, PS/2 merely made Big Blue’s systems incompatible with the rest of the world. Only IBM shops bought PS/2s, and IBM eventually relented.

The TLA was a grand all-encompassing bullshit strategy called Systems Application Architecture, and it was IBM’s very IBM-ish response to Open Systems. SAA promised huge sets of standards unifying IBM’s developer interfaces, user interfaces and communications protocols. For Big Blue, a rationalisation strategy was long overdue. For example, IBM systems didn’t use the industry standard character encoding system, ASCII – they used their own, called EBCDIC – and there were (at least) six versions of EBCDIC. SAA didn’t make IBM an "open system" at all.