One more shot at glory

In the late summer of 1995, IBM threw in the towel and redeployed most of its programmers. It would release one more version of OS/2 in 1996, bundling voice recognition and giving it a more familiar UI, and Big Blue would continue to support it for many years. But it was over – Microsoft had won. What convinced IBM CEO Lou Gerstner of the futility of continuing the project was the dearth of native OS/2 applications. IBM had also let him down. Its nebulous "Workplace OS" strategy involved OS personalities running on a microkernel – but failed to enthuse customers and failed to deliver. Around 2,000 developers had been working on a portable version of OS/2, primarily to run on IBM’s RISC workstations, but it wouldn’t work reliably. The Taligent object-oriented OS came to nothing. And IBM failed to acquire Apple. Microsoft’s Win32 pincer strategy had captured the market. 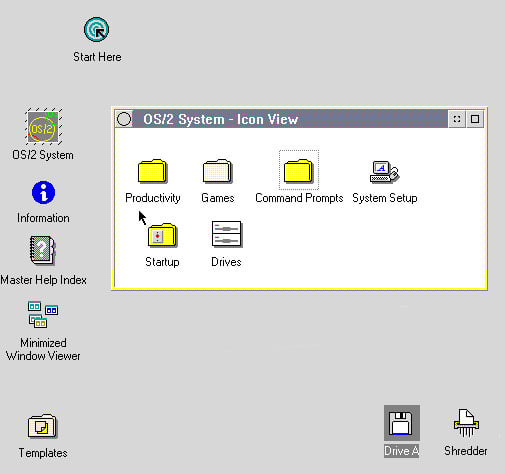 No task bar, no programs folder, no system menu, no shut down menu... and all the apps live in the "System" folder. Plus minimised windows go into a folder. OS/2 was a pretty radical new UI with many familiar features of modern UIs absent. What was it all about, then?

It came from IBM's plans for the "office of the future" - the design labs producing a very literal object-oriented functionalism - as mocked up in this print advertisement from 1990, which predates the WPS: 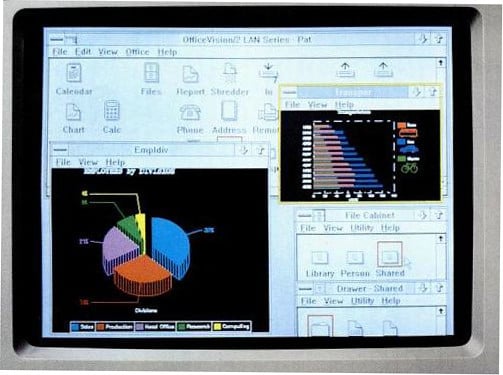 The OfficeVision absorbed 1,500 programmers, but never worked. To maintain its promise to customers that it would deliver groupware, IBM bought Lotus in 1995.

It was hard to sell this office automation to consumers, so IBM argued that it was more flexible. Here's a TV ad:

It had so much flexibility you could change the font and wallpaper of every window element and every window individually. The WPS had more useful features, though. Like the Mac, shadows (or aliases) would follow the original around. Template folders could contain apps and documents and be cloned quickly. Closing the folder minimised all the apps and documents associated with it. It had other eccentricities. By default, icons couldn't be moved with the main mouse button, although that was easy to change. 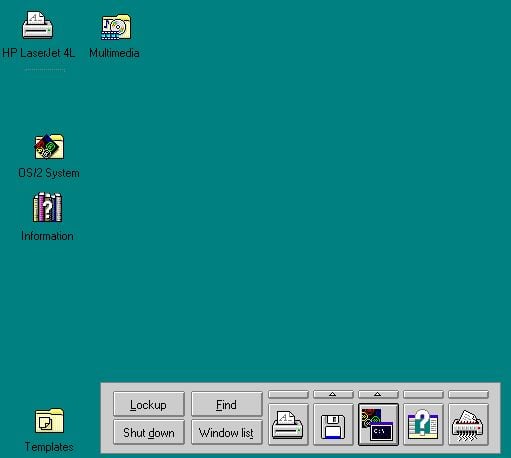 For the consumer push in autumn 1994, OS/2 gained a hurriedly written floating dock 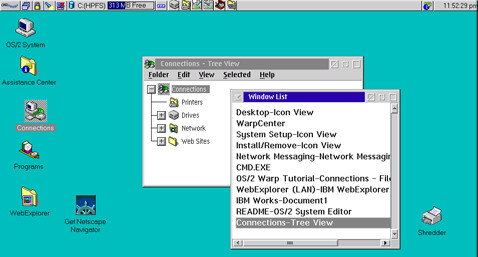 The final version of OS/2 included much more familiar-looking elements. A system menu gave one-click access to every file on the PC, and original Mac icon designer Susan Kare gave it a makeover. Kare had designed the icons for Windows 3.0.

For some reason, IBM gave every mouse action (for example, every drag) a deafening sound.

Why did IBM lose?

Microsoft’s ascent to the top of the PC industry continued to cause great passions. If you had said, in 1987, that Intel and Microsoft would in a decade define the industry, most would have laughed. Intel was struggling to produce competitive RISC chips, and Microsoft had never written an operating system. But the answers to the questions: "Why did Microsoft win" and "Why did IBM lose" are really different.

IBM had never met a competitor like Bill Gates before – one quite so ruthless and opportunistic. Gates fought hard and IBM couldn’t shake him off. But with or without OS/2, IBM could have outflanked him or even dispensed with the nuisance altogether, if it had developed a coherent strategy, one giving customers reasons to think positively about spending money with IBM.

IBM should have realised earlier that the path to OS/2 was a radical one for customers in 1988. It could have taken control of DOS and enhanced it, to offer a smoother upgrade path to the GUI world. In fact, this is what IBM belatedly did – with a product dubbed PM for DOS – which never made it to market. But it was too late. IBM could have made an expensive acquisition of Apple, the most attractive consumer UI, and put it on a firm technology base. But even Apple failed to do this. And even more radically, Big Blue could have realised where the value is in software and competed higher up - helping to create a Linux-like platform that was free.

There are plenty of narratives in this particular counter-history – but most require quite a leap of imagination. It’s hard to see how once Microsoft was established, and had captured the mindshare of developers, the great "unifying platform" of OS/2 could win them back. It’s more useful to look at why Microsoft won.

Firstly, Microsoft ruthlessly went after the market and didn’t care about being liked, or being right – just about driving lots of copies of Windows into the market. The market didn’t like Microsoft, but Microsoft made them money. Software vendors, hardware vendors, peripheral makers – they all made more money with Windows. The software insulted you daily, but the "ecosystem" looked a lot healthier. IBM had no idea of what it took to build a new ecosystem. The suits thought that if they'd built it, and it was good (it was, eventually), then the customers would come – because of the magic letters IBM. The IBM sales teams had acquired many dark skills, including leveraging other IBM products and services. These were no use in a knife fight, on an open plain, with Bill Gates.

Microsoft was also in this 100 per cent. It was not compromised by having to placate a warring division. Gates was not content to settle, as others may have been, for writing applications and tools for other people’s platforms. He wanted the platform. Microsoft had to make Windows work pretty well. There’s no denying that Microsoft had a huge advantage in its ruthless licensing arrangements. PC makers had to pay Microsoft for DOS whether they shipped the PC with DOS or not – so where was the incentive to bundle an alternative? Microsoft eventually lost an antitrust action and made substantial settlements in civil suits with Novell, Be and Sun. But remember, it takes two to tango. Some blame must fall on the short-sightedness of the OEMs and the channel. 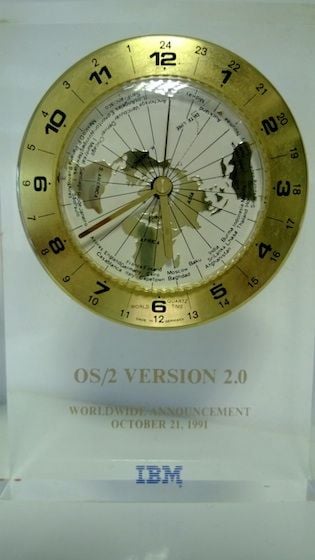 This beautiful timepiece celebrated the global
announcement of OS/2 version 2.0 in October 1991

The OEMs didn’t cry foul at Microsoft’s licensing policy, and this came back to bite them. As the furious competition of the OS wars subsided, Microsoft increased its prices – which is one of the perks of being a monopoly. And as hardware prices fell, the proportion of the ASP going to Microsoft increased. OEMs which had once made handsome margins were squeezed. Nor could they differentiate themselves from each other, Microsoft didn’t allow it – it compromised the ‘Windows experience’. Sometimes it benefits a business to sacrifice margin today in order to keep competition alive and preserve margins in the future. Many actively do this – but the PC hardware industry didn’t.

In the recriminations that followed the OS wars, OS/2 devotees would complain that the computer press was almost uniformly hostile to OS/2. They were quite right – you could count the number of journalists who used and liked OS/2 on the fingers of one hand. (One was John Lettice, founder of The Register - and another was your reporter. The charming OS/2 2.0 souvenir pictured above sits at Reg HQ today). But the press were reflecting both sentiments and economic choices that were widespread. They didn’t want to go back to a world where IBM defined the standards for the open PC.

They were so busy fighting the last war that they didn't see the next one coming. Writing in 1995, as the OS wars raged on Usenet (though it was already clear who had won), the late Guy Kewney summed up his exasperation: