Android users: More of them than fanbois, but they don't use the web

Open ... and Shut Android smartphone shipments now dwarf those of Apple's iPhone, yet Apple's iOS still accounts for the vast majority of mobile web traffic, as reported by The Register.

This gaping void between Android adoption and Android-based web browsing, however, isn't cause to ponder whether it's "time to conclude that Android gadgets are bought by people who don't actually do anything with them," as Henry Blodget does. Rather, it's an invitation to dig deeper into what Android users actually do with their smartphones.

But even when we separate out smartphones, iOS/iPhone still trounces Android. Android now dominates roughly 75 per cent of the global smartphone market (versus 15 per cent for the iPhone), and 53 per cent of the US market (versus 34 per cent for iPhone). But when this surge in Android adoption is compared to its stagnating share of web traffic, things get weird. Horace Dediu of Asymco illustrates this in two charts, with the latter showing web shopping traffic on the two platforms, concluding that Android "engagement is down as ownership is up":

In other words, iPhone users are three times more likely to shop with their phones than Android users, a disparity that was two-to-one just two years ago. This can't be good.

Granted, this are shopping data, and US-centric. Android has over 90 per cent of the Chinese market, for example, none of which is represented in the charts above.

But even if we abstract out shopping altogether, and focus on global web traffic, iOS still trumps Android, and by a considerable amount. At least, it does over Wi-Fi.

In June 2012, Akamai introduced Akamai IO, providing insight into web browsing data to its customers, which include the leading websites. When measuring all mobile web traffic, iOS dominates Android, just as IBM's numbers show. Interestingly, however, for web browsing over cellular networks, Android actually edges iOS, with 34.4 per cent of all mobile web traffic versus 32.8 per cent for iOS: 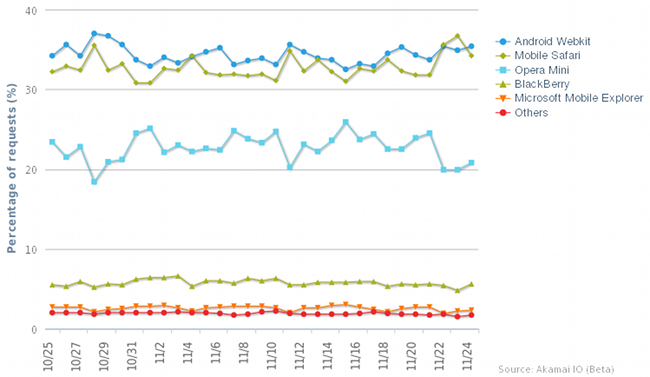 Keep in mind that the Akamai data are pulled primarily from US websites. Presumably Android's share of the web browsing market - both on cellular and Wi-Fi networks - will grow in Akamai's data set as that set expands to include more global web properties.

It would appear that more web browsing happens over Wi-Fi than cellular networks, perhaps because of bandwidth caps. Where people use cellular networks to browse, they use Android more and, keeping the US bias in all of the data sets, probably dramatically more.

Still, Jason Grigsby pulls from this a fascinating observation: why don't Android users surf the web using Wi-Fi more often? After all, given the US-centric data sets, and the wide availability of Wi-Fi in the US, presumably Android should be dwarfing iOS over Wi-Fi networks, given the greater number of Android phones in the market. Grigsby posits that the Android UI for joining a network is "easy to miss," and that lower-income users tend not to have Wi-Fi, with Comscore data pointing to more "haves" owning iOS devices while "have-nots" use Android.

There are data to support this latter suggestion, but it becomes most clear when, again, we take into account Android's global footprint. I've noted before how Apple has struggled in financially distressed markets like Southern Europe. The reality is that most of the world can't afford iPhones and iPads, but a growing number can afford Android devices. When these people buy Android smartphones, web browsing is likely not their primary purpose and, even when it is, they're likely going to be using cellular networks rather than Wi-Fi, with no unlimited data plans to encourage promiscuous browsing.

Put into this context, it's not hard to understand why Android can dominate the global smartphone market and be a laggard in mobile web usage. That said, if my reasoning rings true, then Google's Android strategy, which relies on cheap devices to encourage more advertising revenue against mobile web browsing, may be in for some serious road bumps ahead. ®