NUDT on HPC battle: Total cluster supremacy - Who needs it? 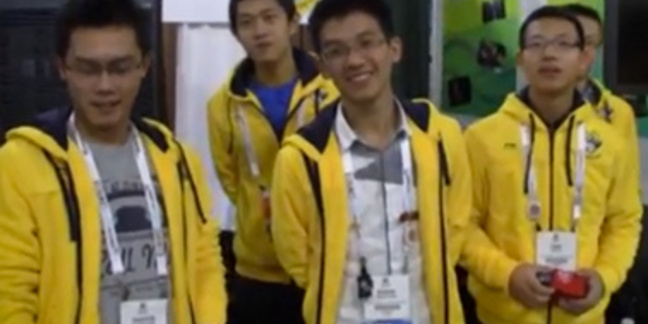 SC12 Video Team NUDT (China’s own National University of Defense Technology) was all smiles when I stopped by their booth on the final day of the SC12 Student Cluster Competition (SCC). And what’s not to smile about? They had just won the LINPACK award with their record-breaking 3 Teraflop/s score and were considered a serious contender for the overall award.

We discussed their LINPACK achievement, and they showed me the plaque (it’s a nice plaque). Then the conversation turned to how they thought they’d do on the scientific applications that make up the bulk of the scoring for the overall award. Their overall reaction to this question? Despite the language barrier, it was a clear “meh.”

After talking to the team and seeing some of the final results, I’m pretty sure that the NUDT team was putting all of their chips on LINPACK. And, assuming they could dominate this category, they’d walk away happy. One of the telling factors is their HPCC score. HPCC is a set of seven HPC tests and includes LINPACK. The NUDT HPCC score wasn’t anything you’d write home to Mom about – or even send a text message, for that matter.

So it looks like Team NUDT went all-out on the independent LINPACK run (the one they submitted for the award) and called it good enough for SC12. But breaking through the 3 Teraflop/s barrier isn’t anything to sniff at, and they should be congratulated for hitting that mark. But I’d like to see them go all-out on all aspects of the competition – not just the drag race portion. ®