'Didya Hear the One About the Traveling Salesman?' 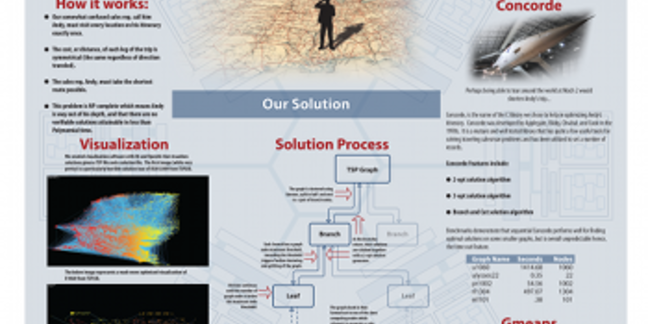 SC12 Until this year, the annual SC Student Cluster Competition focused entirely on seeing how much work teams of university students could wring out of 26 amps of juice. They can use any hardware/software combination that will run the required apps; the only limitation is that their configuration has to be shipping by the time of the show. (For an overview, click here.)

At SC12, organisers introduced a new cluster competition that ran alongside the traditional ‘Big Iron’ battle. This new ‘Mini Iron’ track provides student teams with identical LittleFe six-node Atom-based "clusters in a box". Three university teams and a team from a local Salt Lake City high school were challenged to find the best solution to the Travelling Salesman Problem.

Team Utah (representing hometown University of Utah) ended up winning the LittleFe competition, so congratulations to the Running Utes. (Or is it “Runnin’ Utes?”) They also prepared a couple of posters that explain the challenges they faced in the competition. The first poster (below) does a great job of laying out the Traveling Salesman problem and their initial approach to solving it. I use the word ‘initial’ because it wasn’t the solution they ended up using for the whole competition. 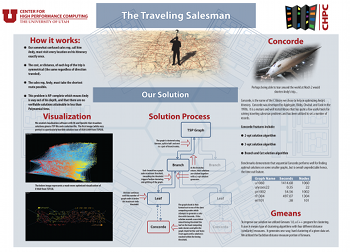 They had a sort of hybrid strategy. First they split up the problem and sent each half to a separate node. The problem is evaluated at the node level, and if it’s still too complex (too many solutions to evaluate), then it is split again. Once the problem is small enough to fit within the processing envelope of the system, they use Concorde algorithms to do a near-exact solve on each branch. While this worked well in their testing runs, it wasn’t providing solutions quickly enough to keep Utah from falling behind their competitors at the show.

So at around 1.00 Mountain Time, they shifted gears and dumped the Concorde in favor of a group of other algorithms that performed much better. From that point on, Team Utah tended to run ahead of the other teams on succeeding data sets, piling up enough points to win the inaugural LittleFe Cup.

Their second poster shows what LittleFe actually looks like and some of the issues they ran up against when using it in the competition. This poster was designed back when the LittleFe competitors were going to be running the same apps as the Big Iron competitors. As the team alludes to in their graphic, running hard core scientific applications on this system is a bit problematic, and probably too ambitious for this first instance of the competition. LittleFe organisers changed over to the Travelling Salesman problem a few weeks before SC12, giving the teams a decent chance to prepare for the task. 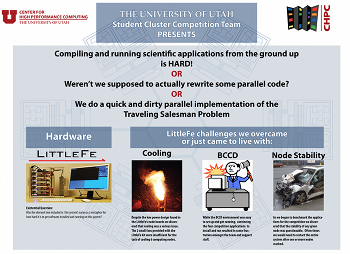 I was a bit surprised by the cooling issues. Sure, these systems were running flat-out, but damn, they’re only Atoms running at barely 1 GHz. Plus most of the teams were running them without skins, which gave them much better airflow. On top of that? They were tucked into one of the colder areas of the convention hall with an ambient temperature of maybe 68°F on the high side. Most of the LittleFe teams added additional fans to cool their boxlets, which seemed to do the trick.

While Team Utah took the overall LittleFe crown, the other teams were recognized for their achievements. CUNY Staten Island took second place (and it was pretty close throughout the competition). Slippery Rock University topped the judges’ interview portion of the competition. Team Skyline, the first and only high school team, garnered an honorable mention when they came out of nowhere to grab the lead; their homegrown algorithm dominated the college teams on the last data set of the competition. But that’s another story for another blog.

Congratulations to all of the LittleFe competitors. I’m looking forward to the next edition of the "Mini Iron" competition at SC13 in Denver. ®