Blackhat once attacked US Department of Defense

Antivirus startup Anvisoft was founded by an infamous Chinese hacker who allegedly cut his teeth exploiting Microsoft Office security holes to hack US defence contractors, it has emerged.

In response to inquiries from The Reg, Anvisoft confirmed via a message from its official Facebook account that the report is accurate. "Yes, it is true," it simply stated.

Dailin, AKA Wicked Rose or sometime Withered Rose, allegedly led a state-sponsored four-man crew called NCPH - Network Crack Program Hacker. According to VeriSign's iDefense, NCPH developed a rootkit [PDF] that was used to infiltrate the US defence establishment in 2006. The group is accused of launching Microsoft Office-based attacks for two years before it disbanded in 2008.

Krebs followed various online clues to piece together his tentative conclusion that Dailin, a 28-year-old graduate of Sichuan University of Science and Engineering in Zigong, registered Anvisoft's domain in 2011, and may still be a key player at the startup.

One of Dailin’s cohorts in NCPH, a hacker nicknamed Rodag, wrote a blog post describing Anvisoft's Smart Defender as a “security aid from abroad” and praised the technology, Krebs noted. 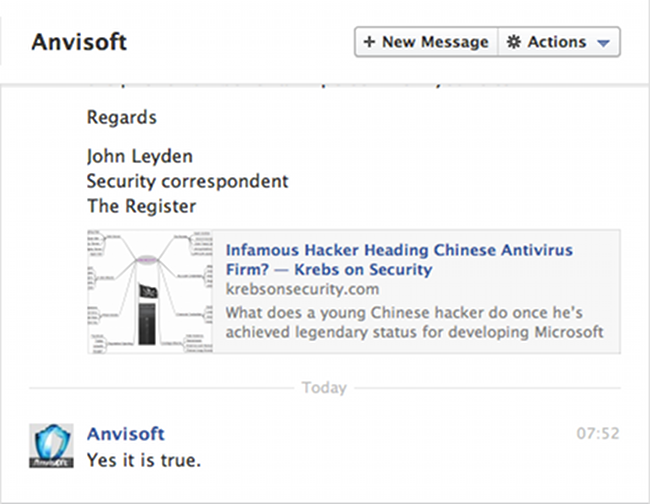 Trademark registration records pinpoint Anvisoft's genesis in the Chinese city of Chengdu although the company states it is based in Toronto, Canada.

Kreb's digital detective work, though persuasive, was far from conclusive, which he admits. There is no suggestion of any wrongdoing by Anvisoft.

"Anvisoft may in fact be a legitimate company, with a legitimate product; and for all I know, it is. But until it starts to answer some basic questions about who’s running the company, this firm is going to have a tough time gaining any kind of credibility or market share," Krebs noted.

Anvisoft's technology has not been widely reviewed, but that's not to say it is ineffective or untrustworthy. Against this Trend Micro, alone among mainstream antivirus software, flags up Anvisoft's Anvi Smart Defender Free setup utility as malign, according to results from VirusTotal.

Western antivirus firms, at least, generally have a policy of not employing former malware writers. Aside for presenting a negative image to potential customers, and sustaining the myth that antivirus firms employ an underground army of virus programmers to ramp up demand for their products, VXers are thought to be ill-suited to life in an antivirus firm.

Not only have they shown themselves to have dubious morals but from a purely practical view the skills required to write a decent antivirus program are not the same as those necessary to construct modern malware.

Almost all Western antivirus firms have a standing ban on employing anyone mixed up in malware for reasons explained in greater length by Sophos here. ®