Up to twice that of ARM-based Windows RT version

If you were holding out for a Surface tablet with Windows 8 Pro, Microsoft has confirmed that they will be available in January. Just be sure to bring a bulging wallet.

In a blog post on Thursday, Microsoft Surface general manager Panos Panay revealed that Redmond plans to offer two versions of the Surface running full Windows, both of which will be priced significantly higher than the ARM-based versions running Windows RT.

The entry-level Surface with Windows 8 Pro will ship with 64GB of solid-state storage for $899. A second version with the same specs but 128GB of storage will go for $999.

What's more, the top-end Surface with Windows RT comes bundled with a Touch Cover, which doubles as a keyboard. Neither of the Windows 8 Pro models will include a cover, so if you want a keyboard you'll need to fork over an additional $120, bringing the total to $1,019 for the 64GB version or $1,119 for the 128GB version.

The new Surface models' high price tags mean they'll be hard-pressed to win over fans of the top-selling tablet to date, Apple's iPad. The latest-generation fruity fondleslabs range from $499 for a 16GB version to $699 for one with 64GB (keyboards not included). 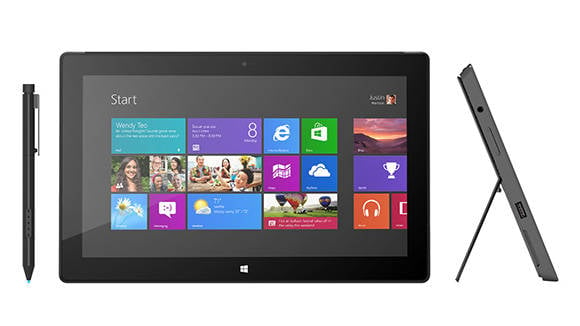 Microsoft Surface with Windows 8 Pro: Keyboard not included – but here, have a pen

Microsoft's argument is that the Surface with Windows 8 Pro isn't just any tablet. According to Redmond's marketing materials, it "runs current Windows 7 desktop applications and integrates with your existing enterprise management infrastructure." In other words, it's a business device, not just a consumer toy.

That means it also supports "the full Office experience," including Outlook, Access, Visio, SharePoint Designer, and other business-oriented components of the Office suite. Surface with Windows RT only supports Word, Excel, PowerPoint, and OneNote.

The Windows 8 Pro Surface also includes a full-size USB 3.0 port and a Mini DisplayPort, and – flying in the face of the late Steve Jobs' wisdom about tablets – it comes with a stylus. According to Microsoft, the pen pairs with technology called Palm Block that "will prevent your handwriting from getting interrupted if you accidently place your palm on the screen as you write."

With specs like these, Surface with Windows 8 Pro really competes less with the likes of the iPad and Android tablets and more with Ultrabooks, many of which now offer similar components – including touchscreens – and are priced comparably to the Intel-powered Surface.

But Surface is still a tablet, not an Ultrabook, and Microsoft has yet to prove its case that a significant chunk of the market is looking for tablets to replace traditional PCs and laptops. Sales of Windows 8 PCs in general have been slow, which points to a market that's resistant to dramatic change. According to the NPD Group, sales of Windows 8 tablets "have been almost non-existent."

And if customers do decide they want Windows 8 tablets, there are plenty of manufacturers with more experience designing and building them than Microsoft. Surface with Windows RT buyers have reported a variety of odd manufacturing glitches, which may be minor problems for a casual-use tablet but would likely be deal-breakers if they cropped up on an expensive piece of kit designed for general-purpose computing.

Not that any of this will dissuade Microsoft. It has already bet a lot on Surface, and in October CEO Steve Ballmer said the company "obviously" plans to make more hardware.

How obvious those plans remain in the second half of 2013 will likely depend a lot on how customers react to the launch of Surface with Windows 8 Pro in January – the exact date of which is as yet unspecified. ®