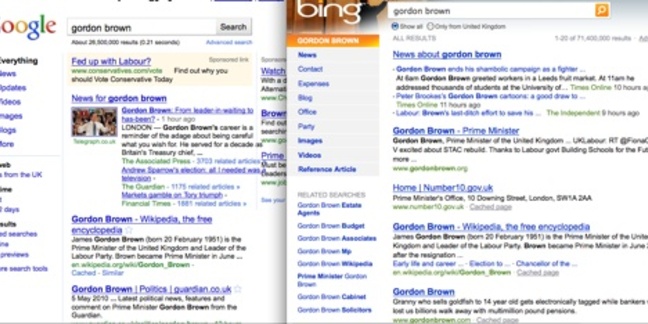 The attack comes in the form of Scroogled.com, which proclaims “Simply put, all of their shopping results are now paid ads”.

On Bing, by contrast, Microsoft promises “an honest search result.”

Scroogled is, however, a little misleading as it quotes Google's “don't be evil” motto and past statements of intent to deliver neutral search results, but does not complain about generic Google search results. Instead, all of Redmond's ire is directed at results produced by google.com/shopping.

There's some merit in that argument as Google Shopping does feature information about Google advertisers only, a change Google made on May 31st 2012. But that change was announced, as transparently as is possible in its favoured corporate-speak, in a blog post, so it's not as if the nature of the results is a dark secret.

Google Shopping also bears the text "Google is compensated by some of these merchants", albeit well and truly below the fold and in pale grey text.

The site also offers a faux dictionary entry for the term 'scroogled' and offers the following guide to the word's usage:

"These jeans were a top pick on Google but I found a better price–I've been Scroogled!"

Another element of the site is a “blog post” offered as a downloadable PDF. The post contains a manifesto explaining “what consumers deserve from search” and exhorts readers to make sure they, and their friends, don't rely on Google alone when buying Christmas presents.

Scroogled's call to action is to try Bing or make it one's home page.

A few minutes spent on Google Shopping might just convince you that's a sensible thing to do: we had a quick look, clicked on a link for a heavily-discounted iPad Mini and found ourselves on a less-than-reputable-looking site that said it didn't sell the iPad at all. Several other links to the Mini offered price tags well beyond Apple's recommended price, an offer we found it easy to ignore. ®

Microsoft Bing is 10: That thing you accidentally use to search for Chrome? Still alive and kicking

Used in 34% of American searches. Really

Microsoft chows down on its open-sourced dog food