What dark deeds does the blackout hide?

Network monitors are showing that Syria has gone dark for internet traffic and mobile communications as rebel forces fight their way into the capital city of Damascus.

Syrian data traffic dropped off a cliff at 10:26am UTC, according to internet inspectors Renesys, with 77 networks representing 92 per cent of the country shutting down. Some minor outages were reported on Tuesday, but beginning Thursday the country is effectively cut off from the rest of the world's data.

"There are a few Syrian networks that are still connected to the Internet, still reachable by traceroutes, and indeed still hosting Syrian content," wrote James Cowie, founder of Renesys, in an advisory.

"These are five networks that use Syrian-registered IP space, but the originator of the routes is actually Tata Communications. These are potentially offshore, rather than domestic, and perhaps not subject to whatever killswitch was thrown today within Syria."

However, he also pointed out that the five networks still running are those that were implicated earlier in the year with spreading a trojan that imitated a Skype plug-in. The malware is thought to have been used by the government to target activists. 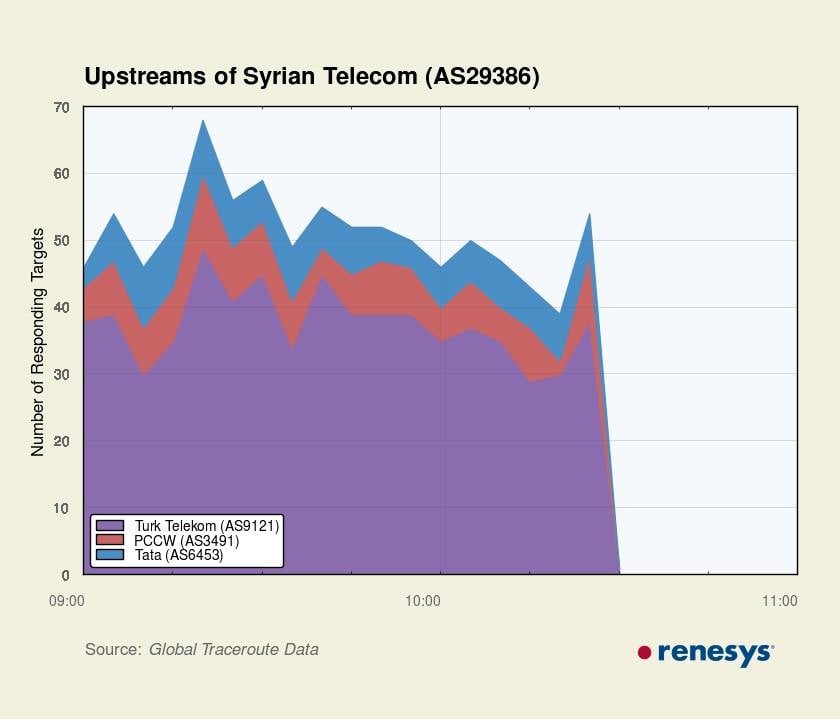 Google is also reporting that all services to the country are down, with no exceptions. Akamai's network monitors are also getting no indication of activity inside the country, and reports via satellite phone from within Syria are saying that the mobile phone network is almost completely disabled.

The besieged Syrian government has not been as quick to shut down communications as Libya or even Egypt, although there have been reports of local blackouts in rebel strongholds. The rebel forces are currently staging a major offensive towards the Syrian capital Damascus, and the shutdown could be an attempt to hinder their communications or to stop news leaking out about the battle.

So far an estimated 40,000 people have been killed in the 20-month Syrian civil war, and Reuters is reporting that the government has begun mining its borders to cut the country off further, and using cluster munitions against the civilian population. ®