There's a transplant op for that

Note to Apple fanbois: If anyone approaches you with an offer to fund your iOS addiction in exchange for your internal organs, that person might be a criminal.

So says the shocking verdict from the Chenzhou Intermediate People's Court in Hunan province, China, which on Thursday found nine people guilty of illegally purchasing a kidney from a 17-year-old, who promptly used the money to buy a new iPhone and iPad.

According to a report from the Xinhua news agency, seven of the nine defendants were sentenced for intentional injury, while two others were exempted from punishment due to their minor roles in the kidney-for-kit scheme.

The ringleader of the organlegging gang, He Wei, was sentenced to five years in prison. Yin Shen, who recruited Wang on an internet chat room in 2011, was sentenced to four years. Other defendants received prison terms of between one and three years, with suspended sentences. 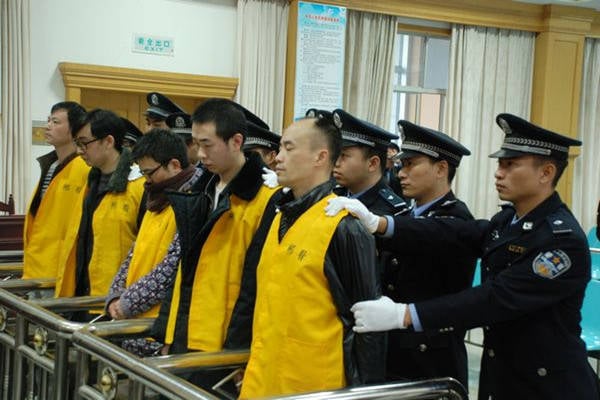 Would you sell a kidney to these men? What if they threw in a cover and a set of headphones?

Wang may have a more pressing need for the funds, however, as he has been suffering from severe renal failure since the operation.

Human organ trafficking is on the rise in China, where 1.5 million people are said to be in need of transplants, but only 10,000 such operations are performed each year.

By comparison, according to research firm Stenvall-Sköld & Company, Apple has sold more than 21 million iPhones and iPads in China. ®