Our report yesterday that the Special Projects Bureau had ordered its intrepid playmonaut back to base ahead of a vital Low Orbit Helium Assisted Navigator (LOHAN) mission, led some of you to suspect that we were poised to wave off the Special Project Electronic Altitude Release System (SPEARS) control board on a high-altitude test flight.

And you were right, because tomorrow morning - weather permitting - a crack High Altitude Ballooning (HAB) team will assemble in a Berkshire field to dispatch SPEARS heavenwards beneath a mighty latex orb.

Let's hear it, then, for Dave Akerman, Neil Barnes and Anthony Stirk, who'll be joining me and El Reg's heroic playmonaut as LOHAN finally exits the shed and soars into the wide blue yonder.

The test is primarily designed to see if SPEARS (and if you're not familiar with the board, pictured below, check out the details here) will indeed fire the custom igniter for our Vulture 2 spaceplane's rocket motor at a predetermined altitude - in this case 24,500m (80,380ft). 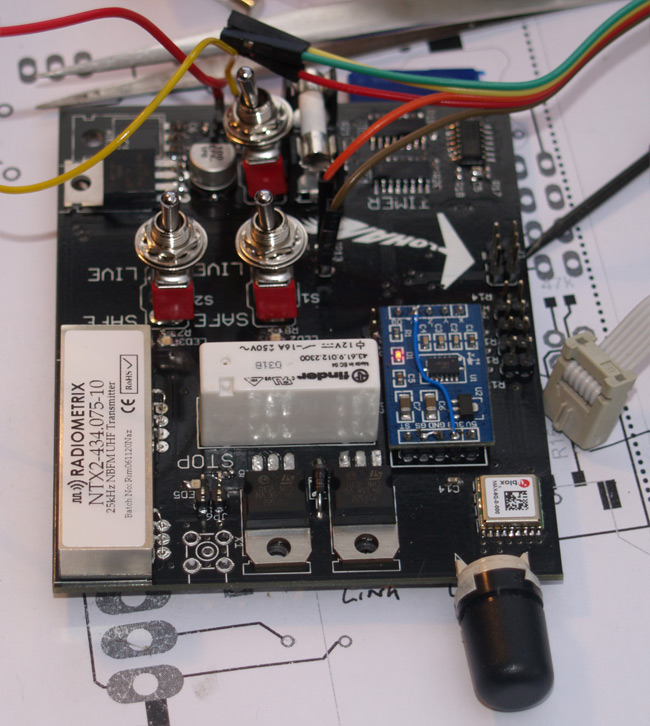 We'll also find out if the safety time-out system works, which will disable the igniter circuit should the aircraft come down to Earth still attached to the fantastical flying truss.

But there's more. We're also going to take the RockBLOCK* Iridium satellite comms board (details here) for a spin... 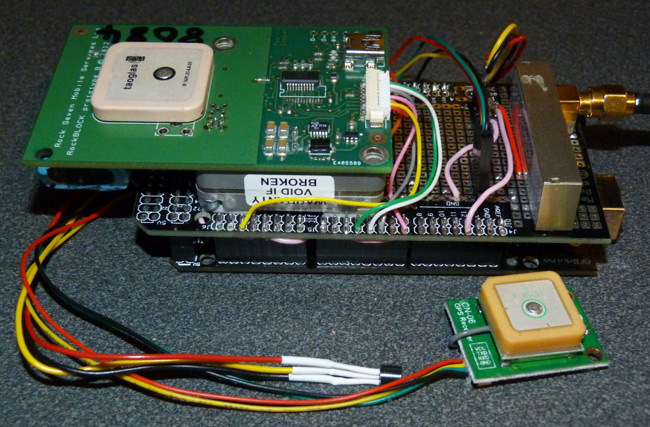 ...as well as seeing how our space-grade Polyimide Thermofoil rocket motor heater performs at altitude: 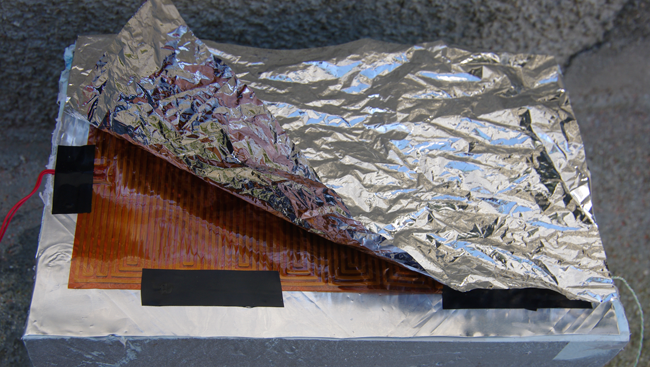 The heater, seen above before getting its protective layers of space blanket and rubber, is taped to the side of a lovingly-crafted styrofoam box which will hold SPEARS and the various mission batteries. For reception reasons, the Iridium rig will travel in its own insulated pod.

Here's LOHAN's impressive box, with the heater's LiPo battery connected and the heater thermocouple cable ready to be hooked up to a temperature sensor. SPEARS will be secured to the sliding balsa tray with rubber bands: 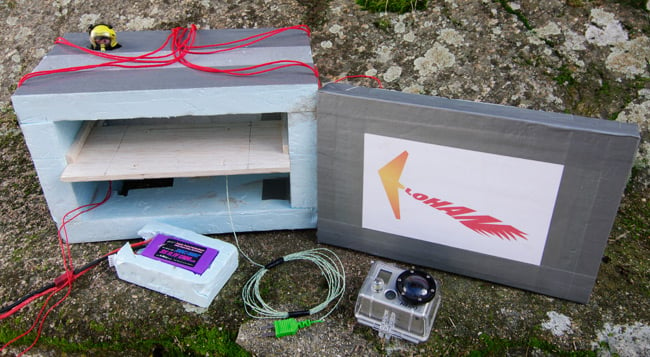 The GoPro HD HERO2 camera fits into the space you can just see at the back left of the box's floor. It'll face downwards because we're keen to see just how a one-quarter scale model of the aforementioned flying truss - which will be dangling below the box - performs under real conditions.

Fans of our Paper Aircraft Released Into Space (PARIS) mission will be pleased to learn that we still had a few paper straws left over from the Vulture 1 aircraft to put together this magnificent structure: 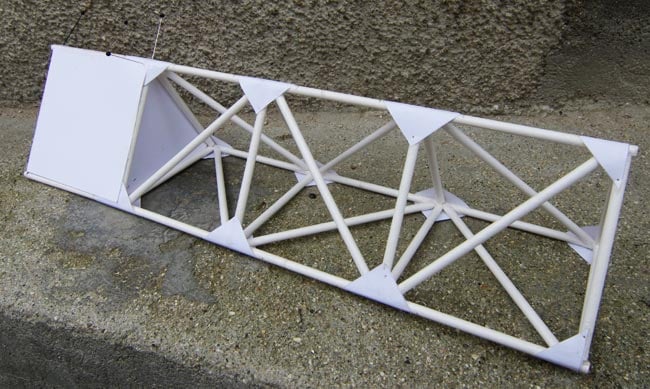 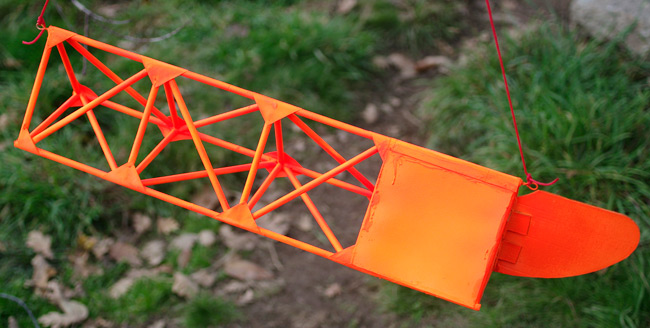 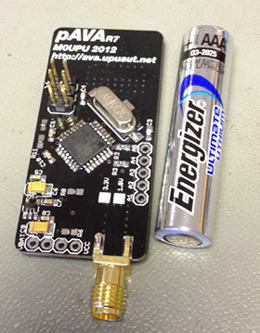 Given that the mission is veritably bristling with electronics, it seems churlish not to equip the truss with its own tracker.

Anthony has provided a miniature unit (pictured), which mean that in total we'll have telemetry data beaming down from four sources: SPEARS (via RTTY); the Iridium set-up (via satellite and RTTY); and the truss (via RTTY).

Anthony said of his diminutive device: "The board is a custom design originally based on the Arduino Pro board running at 1.8v and 4MHz for better battery performance. It packs the usual uBLOX MAX6 GPS module (the 1.8V 'G' variant) and a HopeRF RFM22B radio module.

So, the kit's assembled, the team's ready to roll, and now we just have to look to the skies tomorrow morning for favourable launch conditions. For the record, we'll probably be using a 1600g meteorological balloon filled - wait for it - with hydrogen.

The choice of lifting gas is a concession to the El Reg readers' branch of the Hindenburg fan club, whose members are convinced our penchant for helium will ultimately destroy the planet.

Those of you wishing to follow the tomfoolery will rather splendidly be able see the launch preparations live on your screens right here, from around 10am UK time.

We invite readers to raise the traditional pint to the guys from batc.tv as thanks for sorting this out.

You can monitor the progress of the various trackers on a map down at www.spacenear.us/tracker. Again, a foaming tankard of ale for Alexei Karpenko for opening his servers to Reg readers.

The callsigns and details of the mission trackers are:

People with suitable equipment are warmly invited to assist with remote tracking. You'll need a radio receiver capable of receiving USB (Upper side band transmissions) on 70cms (434MHz). There's a full tracking guide here, and those with Funcubes/SDRs should check this out first.

Anthony suggests you get set up in advance, and direct any questions to the IRC channel irc.freenode.net#highaltitude. There's a web client here. Bear in mind stated frequencies may change according to circumstances, so be sure to check in for the latest state of play. ®

*Nick Farrell of Rock Seven - which kindly donated a board to the LOHAN cause - tells us the RockBLOCK shop is now open for business.

The "Naked" PCB versions of the RockBLOCK will be shipping on 17 December, with the RockBLOCK "Rugged" ready to roll on 17/18 January.