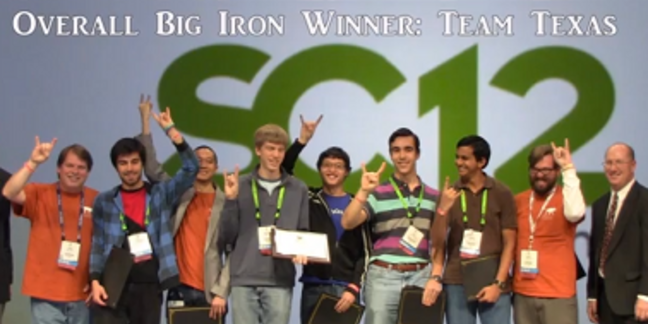 SC12 Video The 2012 Student Cluster Competition (SCC) is in the books and we have all of the results, right here, right now. First, as was released earlier, China’s Team NUDT ran away with the Highest LINPACK Award, an SCC record 3.014 Teraflop/s score. Their compatriots, Team USTC, locked in second place with 2.793 Teraflops/s, and the Texas Longhorns nabbed third with their 2.488 score.

Organisers piloted a new SCC division this year, the LittleFe competition (or ‘Mini Iron’), where student teams used identical six-node LittleFe systems to come up with the best solution to a 10,000-city Traveling Salesman problem. This competition attracted three university teams and one local Salt Lake City high school team all looking to become the first ever winner of the ‘Mini Iron Melee Cup’. (There isn’t an actual cup… yet.)

The winner of the LittleFe competition was the hometown favorite University of Utah team. They came into the competition with a firm idea of exactly how they’d attack the problem, but when they began to consistently fall behind during the first day of the contest, they changed strategies (and algorithms) on the fly. After making the change, they were able to work their way into the lead and ended up finishing number one.

Team CUNY Staten Island challenged Utah for first place but ended up taking a close second. Team Slippery Rock gets a special mention for finishing first on the interview portion of the competition – meaning they did the best job of explaining the problem, the challenges inherent in solving it, and their approach. The lone high school competitor, Team Skyline, also deserves recognition for the one shining moment when their homegrown algorithm jetted them ahead of all competitors.

The traditional Big Iron competition was a clash between the traditional power teams from Asia (China’s NUDT and USTC, Taiwan’s NTHU), experienced players from the United States (Purdue, U of Texas, Boston), and newcomers from Texas Tech and The University of the Pacific.

The new teams added some new wrinkles to the competition. The University of the Pacific sent the first all-female team, dubbed Team Venus, while the kids from Texas Tech brought an ultra-efficient homemade immersion cooling rig to Salt Lake. Unfortunately their gear didn’t make the trip, so we didn’t get to see what it could do in competition conditions.

After a full three days of cluster configuring and code crunching, the winner of the Big Iron Overall Award was announced at the Gala Awards Ceremony. Team Longhorn from the University of Texas, Austin landed the top spot and are the SC12 Student Cluster Competition Big Iron kings. China’s USTC came in second, and returning champion Team Taiwan finished a very close third.

In the minds of student cluster competition observers, this is a bit of an upset victory. Many expected Team Taiwan (the SC10 and SC11 champs) to pull off the hat trick by taking the crown again this year. Others also expected one of the Chinese teams (NUDT or USTC) to mount strong challenges.

Let’s break down the scores and see how they pulled it off. The first thing to note is that the competition was close. Not as close as the razor-thin margin separating Team Taiwan and Team NUDT at the Battle in Seattle in 2011, but still a tight race. The Texas margin of victory over second-place USTC was about 5 per cent. The fight for second place was much tighter, with only 2 per cent separating USTC from Team Taiwan.

The Texas victory was broadly based. They topped all competitors on three of the four scientific applications and had maximum scores on two. Teams Taiwan and USTC were a close second and third on the scientific apps, just a few percentage points behind the Longhorns. USTC made up some ground on Texas by scoring a full point higher on the HPCC benchmark, while Taiwan lost significant ground to both of the other teams. So Texas was slightly ahead of the field based on system and application performance criteria.

The last factor in the scoring formula is the round of interviews with competition judges; students discuss the applications, their systems, and what they’ve learned along the way. Texas had the top interview score, which ensured their overall victory. USTC and Taiwan were locked in a tight battle for second place, essentially tied on application scores. Taiwan scored a narrow victory on the interviews, but USTC had a significantly higher HPCC score – enough to give them the second place finish.

Nodes asleep at the wheel, woken up by the judges

Purdue, NUDT, and Team Boston were in the next echelon of finishers. Purdue, always a solid competitor, took second place on the interviews and typically took third or fourth on the application runs. Boston was a bit handicapped out of the chute when they found that competition rules wouldn’t allow them to disable some of their hardware using their variation of sleep mode. This meant that they had to run the same configuration throughout the competition; as a result, they needed to disable two nodes of their eight-node (256 total cores) system.

Team Red Raider from Texas Tech and Team Venus from the University of the Pacific finished toward the back of the pack this year. Team Venus did well for a first-time team, scoring fourth in LINPACK and in the interview portion of the competition. But they were admittedly unfamiliar with the art of HPC clustering, Linux, and the scientific applications. Their competitors were much more experienced and thus able to pile up points where Team Venus couldn’t. All in all, a good showing – and their all-female composition brought a lot of attention to their school and their quest to get more young women interested in science, tech, engineering and maths (STEM) fields.

The Texas Tech competition system never made it to Salt Lake City. They were forced to make do with what other teams (Teams Longhorn, Boston and Purdue) and sponsors Dell and Mellanox could scrape up at the last minute. Much of their time was spent installing and configuring the constantly changing hodgepodge of servers, thus they couldn’t turn in results on several of the applications and benchmarks. Still, they had a great system design, and I hope they can come back next year with a new version to show what it can do.

On the brief video (above), you’ll see the winning teams receiving their awards, and I manage to catch a word with the Texas team. I hit them with the question that used to greet every pro athlete (at least in the US), right after winning an important title: ”What are you going to do now?” to which the victor(s) replied, “I’m going to Disneyland!” But Team Longhorn has a completely different answer.

All in all, it was yet another great Student Cluster Competition. All of the participants got a lot of benefit from this year’s competition. This includes the teams competing for cluster glory on the show floor, their coaches and advisors, and the companies and institutions who made all of this possible with their generous sponsorship. The SC12 organizers, particularly Dr. Peter Molnar (chair of the LittleFe division) and U of Colorado’s own Doug Smith (chair of the Big Iron division), did a great job in putting together two competition tracks and providing everything the teams needed to make their trip both educational and enjoyable.

I hope that the competition survives unchanged for SC13 in Denver. Over the past two years, there has been talk about eliminating parts of the competition or scaling it back to save money, but I think the SCC is one of the best outreach vehicles the organization has.

I also think (well, actually, I know) that there are plenty of companies who would be interested in sponsoring teams or the overall competition for 2013 and onward. They just need to get an idea of what’s involved so they can pitch it internally – and they need to hear about it early enough to get it into their 2013 budgets. If any company out there wants to be involved in the Student Cluster Competition, they can certainly reach out to me, and I’ll make sure that they get connected with the proper folks at SC.

The next event on our Student Cluster Competition calendar is the ISC’13 tournament in Europe. Stay tuned to El Reg for details on that and all SCC-related news. ®

Crank up the caffeine for ISC Student Cluster Competition 2017

HPC Blog What you need to know, HPC competitors