Want to add more RAM? Break out your heat gun and guitar picks

Photos Apple's 21.5-inch iMac, which went on sale in the US last Friday, has revealed two of its secrets: first, that it's a collosal pain to get inside should you want to upgrade its RAM or its hard drives; and second, that at least some of the units currently on store shelves are labeled as being "Assembled in USA".

The new iMac – the smaller of the two über-skinny models announced along with the iPad mini and other Cupertinian kit on October 23 – has been duly torn apart by the tools 'n' parts 'n' repair-advice folks at iFixit. Not only did they discover how frustratingly difficult it is to upgrade, but they also noticed that on its back it proudly proclaims that it was assembled in the good ol' US of A.

iFixit was not alone in its discovery. The same provenance was reported by Fortune. It should also be noted that the same "Assembled in USA" notification has been mentioned in Apple's discussion forums as appearing, for example, on a Mac mini in 2006, a Mac Pro in 2007, and an iMac in 2011.

Before you jump to the conclusion that Apple is moving its product assembly from China to its home shores, know that such a development would likely be trumpeted by Apple's PR and marketing crews as a patriotic move by Cook & Co. "job creators".

It's also instructive to note exactly what "Assembled in USA" means. As AppleInsider points out, the US Federal Trade Commission says that the use of "Assembled in USA" on a product is valid "when its principal assembly takes place in the U.S. and the assembly is substantial. For the 'assembly' claim to be valid, the product's last 'substantial transformation' also should have occurred in the U.S."

As an example of an invalid use of "Assembled in USA", the FTC cites a computer with all of its major components being made outside the US, then "put together in a simple 'screwdriver' operation in the U.S." That computer, the FTC rules, "must be marked with a foreign country of origin." Why? Because "An 'Assembled in U.S.' claim without further qualification is deceptive."

So there's some "substantial" assembly of the new 21.5-inch iMac being done in the US. Exactly what amount we don't know, except – if Apple is rigorously following the FTC guidelines – that it's not a "simple 'screwdriver' operation."

Ironically, iFixit discovered in its teardown of the new 21.5-inch iMac that there's little involved in servicing it that could be described as simple, screwdriver or no screwdriver. 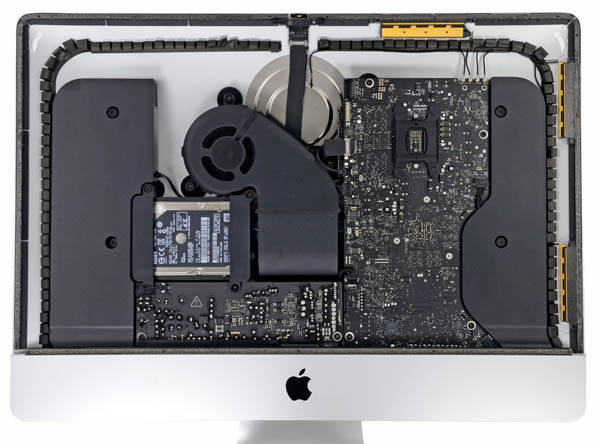 Even such straightforward matters as upgrading RAM or swapping out the hard drive – now a 2.5-inch laptop drive, by the way, not the older iMac's 3.5-inch drive – are a pain. "Once inside," iFixit wrote in an email, "folks can still replace the RAM, hard drive, and CPU, but they'll have to remove the entire logic board before doing so."

And getting inside the new iMac is no trivial matter. "We were quite worried when we saw that super-thin bezel during Apple's keynote," they write, "and unfortunately we were correct: the glass and LCD are now glued to the iMac's frame with incredibly strong adhesive." 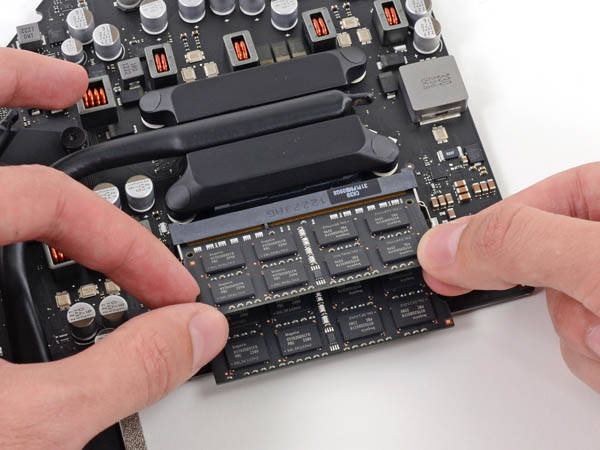 After using a heat gun to melt the adhesive and their trusty guitar picks to pry the display loose, iFixit discovered a thoroughly redesigned iMac. The three fans of the previous model have been replaced by one, there's no optical drive (but you knew that), the hard drive is now encased in a rubber vibration-dampening housing, and a second microphone has been added, presumably for noise cancellation "to improve sound quality during intimate FaceTime chats with your mother," they write.

So, yes, you can replace the CPU, as well as upgrade your RAM and swap out your hard drive – although there's no room for a second drive, as there was in earlier models. But if you do open the iMac to accomplish these should-be-straightforward upgrades, know that getting it back together is no easy feat. According to iFixit, "You'll have to masterfully peel off the old double-sided sticky tape and apply new tape in order to reseal this iMac into original condition." 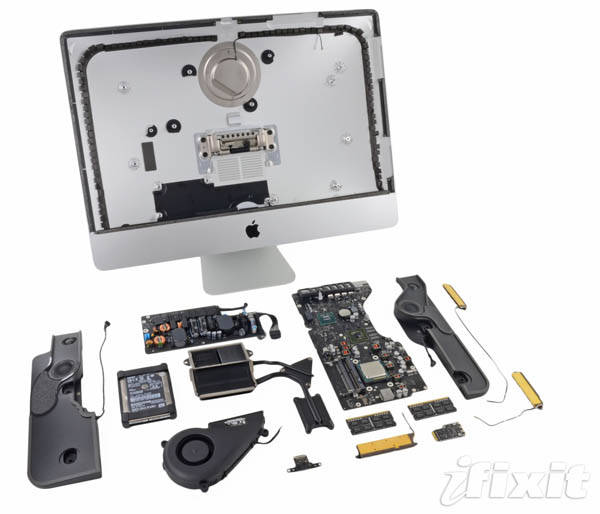 Don't expect to put this puppy back together without a supply of fresh double-sided tape, iFixit warns (click to enlarge)

Call us old fashioned, but we believe that the design of every personal computer should make it simple to add more RAM and to upgrade – or, for that matter, replace – its hard drive. We're on iFixit's side when it gives the new 21.5-inch iMac a dismal score of three-out-of-10 on its repairability scale.

Drives die, y'know? It shouldn't require a trip to your authorized service technician to replace one.

"Assembled in USA" or not, Apple's latest all-in-one-desktop is certainly not designed to be disassembled in USA – or anywhere else, for that matter – except by one of Apple's own repair techs.

As iFixit sums up the latest iMac, "Hackers, tinkerers, and repairers be forewarned: get last year's model if you'd like to alter your machine in any way." ®