It's all in the EULA fine print

There’s evidently an uneasiness about the concept of responsibility, as the vendor seeks to limit its responsibility to the user and yet in the same text, regards the user as irresponsible and insists they follow every whim concealed in the agreement. Oddly enough, this resonates with the banking crisis. Bear with me here. Recently, as speaker in the BBC’s Reith Lecture series, Harvard History Professor Niall Ferguson argued against regulation in the banking sector. The phrase he oft repeated was that the banking crisis did not reflect the rule of law, but the rule of lawyers. In short, those that had taken us into this mess went unpunished and that impenetrable regulation had made it impossible for justice to be seen to be done.

He remarked that if there was less regulation and in its place the certain knowledge that those who stepped out of line would be met with the full power of the law, then fewer destabilising risks would be taken and more sensible decisions would likely follow as a consequence. Again, it’s all down to acting responsibly and if that can be safely assumed with clear and simple rules, then you don’t need to get bogged down in incomprehensible legalese and its associated expense. 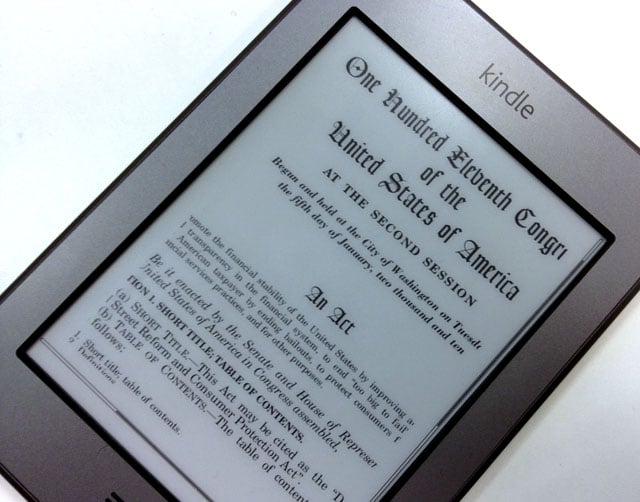 The Dodd-Frank Act was passed to improve "transparency in the financial system" yet it's 394,894 words long

Ferguson remarked that after the banking crisis talks in the US, the remedy in the Dodd-Frank Act was further excessive regulation. “The act requires that regulators create 243 new rules, conduct 67 studies - to see if the rules are necessary - and issue 22 periodic reports.” You can read all of the lecture here.

Hands up who thinks that has worked?

So how do we unravel the licence agreement prerequisite that dogs all our software installations? Those thousands and thousands of unread words that someone was paid to write and others paid to check and double check. Perhaps software vendors could assume that users will act responsibly. There will always be those users that don’t, but how is having a lengthy licence agreement ever going to have any impact on their behaviour?

Like the banking deregulation idea, it’s all about knowing the rules. I thought I knew the rules about installing Flash, based on common sense presumptions, but there’s some bloody stupid stuff in there I’ve found... assuming I understood. And there lies the problem.

Feel the fear and do it anyway

Companies don’t want to hold a gun to your head when you invest in a product and bark, ‘you better behave buster or you’re dead’. So the weapon of fear is concealed in legalese that they don’t even want us to read, let alone understand. In fact, I have doubts that any company would expect users to abide by these rules. Why? Because these agreements are put together by people too and, except in case of professional interest, they’ll be ticking I agree without reading a word for their own computing needs too.

So it’s farcical. We all know this as it’s part of our everyday experience. The weapon of fear of prosecution doesn’t work because the numbers are so vast and most users are reasonably well behaved. And those naughty people that need to be concerned about what’s in them will turn a blind eye, just like the rest of us are encouraged to. If corporations think weighty licence agreements work, the lie isn’t just with us as we tick I agree and understand, it is with them too.

The issue isn’t just to do with being obliged to lie just to proceed with a software installation, it’s the assumption that what you are agreeing to is reasonable and you needn’t worry your little head by reading any of it. Yet in some instances, the hoops you’re being asked to jump through are extremely unreasonable and it’s time this idiocy was filleted out. It could surely make software cheaper and more attractive to buy.

So, to ask the question again: just what is it that the licence contains that they’d rather we didn’t dwell on? The answer must be the relationship that you have with the company as a customer. It’s a behind-the-scenes contract that says, we have to do this, but you don’t have to worry about it if you play fair. It’s like assuming the person you marry will be faithful only for them to tell you later: I was always going to screw around, honey, I thought you knew.

Indeed, the trouble with this arrangement is there is an increasing arrogance in what is considered acceptable to demand from the user. A lot of this can be buried in licence agreements that sprawl into issues of privacy which then links to yet another policy document and another ten minutes or more of your life that you’ll never have back again. And so it goes.

For me, this all began with a feeling of unease about the lies we routinely tell for our everyday computing needs – we never read this stuff and it seems like we're not expected to either. Yet I’ve come to the conclusion that this discontent has less to do with this process troubling an innate honesty. It is more about an increasing feeling of contempt for the 'I agree and understand' approach that, time and again, undermines personal integrity to perpetuate what amounts to a meaningless relationship. ®