Scientists believe they have found the world's oldest dinosaur after fully analysing a fossil unearthed 80 years ago.

The ten-foot-long dorky-looking Nyasasaurus parringtoni scuttled over the Earth 10 to 15 million years earlier than the previously oldest known dinosaurs, palaeontologists claimed in an article published in the journal Biology Letters.

Analysis of the 243-million-year-old fossil also reveals interesting facts about what makes a dinosaur. 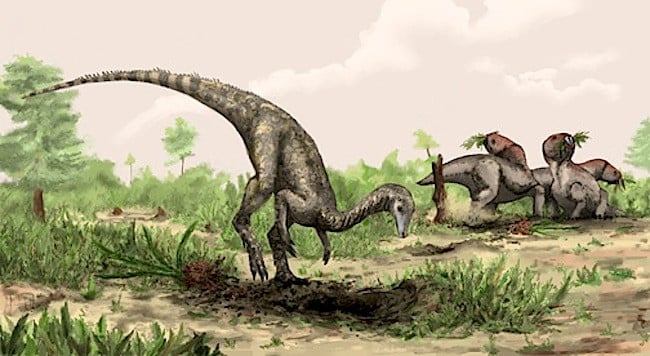 After analysing the seven bones that remain of the dinosaur - one upper arm bone and six vertebrae - the boffins hypothesised that the dino walked upright, was approximately 3ft high at the hip, and had a body the same size as a labrador.

The bones confirmed existing theories about the nature of dinosaurs: for instance, the bone tissue, woven haphazardly rather than laid down in an organised way, suggests rapid growth, a key characteristic among dinosaurs.

The find also suggests that dinosaurs were not the dominant vertebrate group during their early evolution. And it helps explain how they diversified from archosaurs - the predominant land animals in the Mid Triassic period that included dinosaurs and the ancestors of today's crocodiles.

Little Nyasasaurus was found near present-day Lake Nyasa in Tanzania in the 1930s by Francis Rex Parrington of Cambridge University. It is named after him and the lake.

The oldest dinosaur? A Middle Triassic dinosauriform from Tanzania was published online today in Biology Letters, a journal of the UK's Royal Society. ®