'We told you so!' scream paranoid Californians

Video The US Army has reported the successfully completion of a two-hour low-level test flight by an automated Black Hawk helicopter dubbed RASCAL, aka the Rotorcraft Aircrew Systems Concept Airborne Laboratory.

"This was the first time terrain-aware autonomy has been achieved on a Black Hawk," said Lt. Col. Carl Ott, test pilot and chief of the Flight Projects Office at the US Army Aviation and Missile Research’s Development and Engineering Center.

During the flight last month, the RASCAL swooped through the California hills near San José at between 200 and 400 feet in altitude. The on-board systems successfully located a safe landing spot and came down to a hover 60 feet (13 per cent of a brontosaurus) above it to within a 12 inches (3.3 per cent of a double-decker bus) of accuracy.

"A risk-minimizing algorithm was used to compute and command a safe trajectory continuously throughout 23 miles of rugged terrain in a single flight, at an average speed of 40 knots," said Matthew Whalley, the Autonomous Rotorcraft Project lead. "No prior knowledge of the terrain was used."

Inside the helicopter for the flight was the RASCAL systems operator, along with developer Dr. Marc Takahashi and two test pilots with hydraulic controls in case the fly-by-wire computer system suffered a Blue Screen that really could lead to death.

RASCAL has been under development by the Army and NASA for nearly two decades, with one of the original papers published in 1992. The helicopter has a rotational forward sensing pod that's tied in with ground and air radar systems and a lot of computing grunt to enable the aircraft to detect terrain features and move around them. While landing is currently out of the question, it seems, that would be the next logical step.

Despite its success, the demonstration shows that the military will still need flesh and blood pilots for a long time to come. Helicopters on the battlefield going 40 knots at that height would have the life expectancy of a snowflake in a blast furnace, but the system could be used for transportation or supply drops behind the lines to save on pilots. 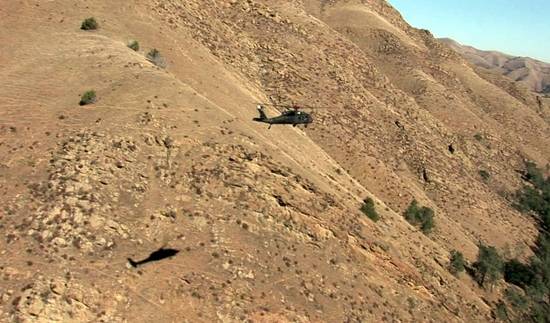 At 40 knots in battlefield action, the RASCAL might as well have a target painted on its side

You might wonder why it's taking so long to automate the process of piloting helicopters. Automatic pilots have been around for decades in aviation and land huge passenger jets these days, while Google has declared the self-driving car is working fine and five years form being street-legal.

Part of the problem is that helicopters are probably the toughest flight challenge for any pilot, human or otherwise. A car's driver merely has to control the speed and direction of their vehicle while operating on a flat surface. The helicopter adds turbulence, height control, and if its rotors fail, who or what is piloting it would have to deal with the resulting downward acceleration of 9.8m/sec2.

Most humans couldn't manage that, and for an autonomous helicopter, both the computational and programming challenges would be daunting.

Nevertheless, the news will no doubt fuel the fantasies of many of California's conspiracy-loving paranoids (of whom there are many), in that there's now a faint possibility that robotic black helicopters really are out there following them. ®