Ebb and Flow, the twin spacecraft that comprise NASA's Gravity Recovery and Interior Laboratory (GRAIL) mission, have created a gravity map and other analyses of the moon, and Lunar boffins have used the results to assert that our sole natural satellite is riven by deep cracks.

Maria Zuber of the Massachusetts Institute of Technology explained the utility of a gravity map to NASA, saying "When we see a notable change in the gravity field, we can sync up this change with surface topography features such as craters, rilles or mountains."

Zuber says the map also “reveals evidence for fracturing of the interior extending to the deep crust and possibly the mantle.” That crust, says Mark Wieczorek, a GRAIL co-investigator at the Institut de Physique du Globe de Paris, has an “average thickness of the moon's crust is between 21 and 27 miles (34 and 43 kilometers), which is about 6 to 12 miles (10 to 20 kilometers) thinner than previously thought.” 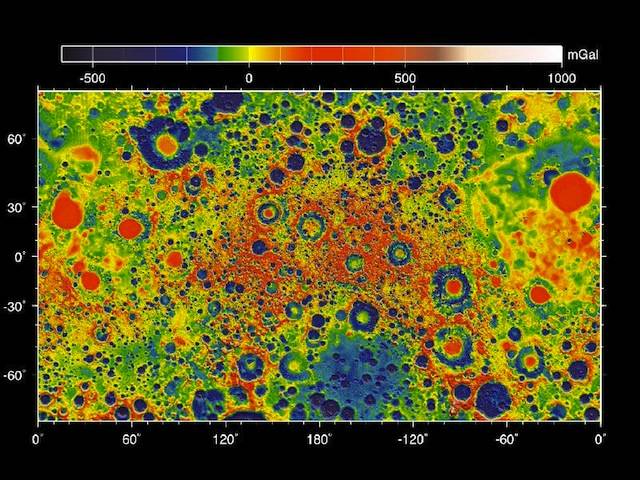 The gravity field of the moon as measured by NASA's GRAIL mission.
Units are milliGalileos where 1 Galileo is 1 centimeter per second squared.
Reds correspond to areas of higher local gravity, and blues correspond
to mass deficits which create areas of lower local gravity.
Image credit: NASA/ARC/MIT

Wieczorek added that "With this crustal thickness, the bulk composition of the moon is similar to that of Earth. This supports models where the moon is derived from Earth materials that were ejected during a giant impact event early in solar system history."

The new details about the Moon are fully-explained in three Science papers and were detailed at the meeting of the American Geophysical Union in San Francisco yesterday.

The revelations are the result of the main phase of the GRAIL mission, which saw the moon bathed in X-rays to collect the data. That phase has now ended and the twin probes may be granted an extended mission, but the mission design says “Following the Science Phase (or extended mission phase), a 5-day decommissioning period is planned, after which the spacecraft will impact the lunar surface in ~40 days.”

It would be poetic if the probes fell into the cracks it discovered. ®