Register hack locates a source for the error

As Apple pushes out an update to iOS 6 maps to remove the now-notorious “desert Mildura”, I’m going to sound an unusual note of fairness to Cupertino for the mistake.

It wasn’t actually Apple’s fault. It looked bad compared to Google Maps, because the Chocolate Factory has spent an awful lot of money, time and petrol on StreetView and other ways to improve the “ground truth” of its maps – but Apple hasn’t yet had the chance to correct the data it uses as inputs, to any great extent.

To be blunt, there is a place called Mildura whose location is given as exactly where Apple put it – at least, there is in an authoritative source for such a location.

The question that didn’t get asked in the midst of the game of laughing-and-pointing at Apple is “what was the data source”? It is not, after all, Apple, since it takes time to build one’s own maps, and even Google’s improvements to incoming map data are still only part of the story. Google Maps credits the local data sources it uses, down in the right-hand bottom corner, underneath a couple of dialogues that obscure the credits.

In this case, the Australian Gazetteer – the authoritative list of 300,000-plus placenames, complete with coordinates – includes two Milduras. One is the “real” town, the other is an entry for “Mildura Rural City”, coordinates -34.79724 141.76108. It’s this second entry that points to the middle of the Murray-Sunset National Park, just near a spot called Rocket Lake. 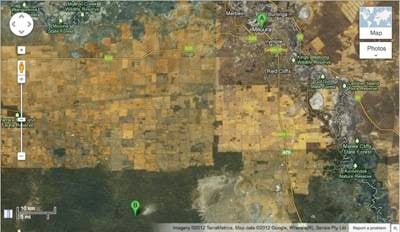 In this Google Maps screen-grab, Map pin A shows the "real" Mildura. Map pin B shows

the location given for "Mildura Regional City" in the Gazetteer of Australia.

What does Mildura Rural City signify? Vulture South has no idea*. Like a South Pacific Island, a record was created and, in among the hundreds of thousands, it remained, unchecked until now. It will have been viewed by lots of people on the way to Apple, including map data suppliers – and someone, de-duplicating the data, decided that “Mildura Rural City” sounded more authoritative than mere “Mildura”.

I can’t even blame the custodian of the Gazetteer, Geosciences Australia, for the error, since the data comes from the state of Victoria and the status is given as “authorised”. Until someone – pity them – is moved to sift through the history of inputs to the Gazetteer, we won’t know. ®

Update: *Vulture South thanks the commentards who have pointed out that the relevant point is the centre of the local government area carrying the Mildura Regional City tag. ®