Mighty archive to 'unlock the power of DNA' - Cameron

Prime Minister David Cameron is to announce plans for the NHS to create a massive database of patients' DNA, which experts have advised could lead to massive health benefits and advances in medical technology. However the creation of such a database has obvious and far reaching privacy implications.

In an attempt to address such concerns, an official statement issued ahead of the announcements states that such data would be anonymised "apart from when it is used for an individuals own care".

"A number of ways to store this data will be investigated," a Downing Street spokesman said. "The privacy and confidentiality of NHS patients will be paramount in this decision."

Under the proposal, the DNA of NHS patients from England will be sequenced over three to five years and analysed, the Prime Minister said today. He added he hoped to "transform cancer treatment" in the country.

Cameron said that £100m had been set aside for the database, although Downing Street's official announcement was careful not to use that particular word preferring instead to reference a "data infrastructure" to be built for genetic boffins. 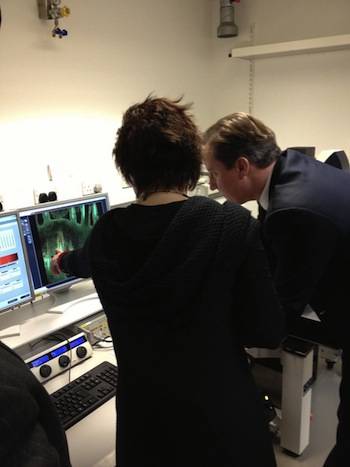 Yes, Prime Minister, it will be a MASSIVE database. Pic credit: No. 10

The genome profile will give doctors a new, advanced understanding of a patient’s genetic make-up, condition and treatment needs, ensuring they have access to the right drugs and personalised care far quicker than ever before.

It will also help to develop life-saving new drugs, treatments and scientific breakthroughs, which experts predict could significantly reduce the number of premature deaths from cancer within a generation.

The PM said the millions of pounds his government planned to pump into the project would "unlock the power of DNA data".

A human genome can be fully sequenced for less than £1,000, Number 10 said. The original DNA-mapping programme undertaken during Tony Blair's premiership at around the turn of the century cost £500m.

Now that costs have supposedly plummeted, the market is ripe to be exploited by private companies hoping to cash in by using these rich datasets to create "personalised medicines and individualised treatments".

GeneWatch UK previously warned that such a plan "amounts to building a DNA database in the NHS by stealth". ®