Iran took another step in its plans to eradicate Western influence from its Internet, with the weekend launch of its very own, government-sanctioned, censored and monitored video-sharing site, called Mehr.

The site – its name means “affection” in Farsi, according to Agence France Presse – is intended to give Iranians video sharing without relaxing the veil the nation's government has drawn over YouTube. 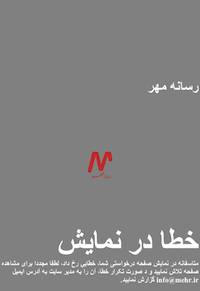 The attempt to localise the business of posting and sharing lolcat videos is a new angle for the Iranian regime, which has previously concentrated on strict censorship that includes a ban on using VPN software.

Iran’s censorship of the Internet, most particularly targeting platforms like Facebook, Twitter, pornography and Western media, has brought both criticism and, in the case of America, sanctions against the country.

The country’s plan to unplug itself from the global Internet to create its own walled garden has been similarly criticized, has also proven difficult to deliver. The latest news is, in fact, accompanied with the oft-repeated claim that Iran is taking its “first steps” towards establishing its national Internet.

The steps are baby steps: at the time of writing Mehr produced the rather stylish 404 page visible at right, but offered no useful functions. ®