IEDM If you want to marry rigid silicon with soft, stretchy human tissue, it's best to create silicon devices that can conform, stretch, and live in harmony with living flesh.

So says University of Illinois professor John Rogers, who provided an update on his work with bio-integrated and transient electronics to the attendees of the International Electron Device Meeting (IEDM) on Monday in San Francisco.

Despite the continuing miniaturization of electronics that has enabled computers to move from the industrial few to the pervasively personal multitudes, Rogers is of the opinion that merely shrinking chips might not be the only way to move forward as we innovate ourselves into the increasingly digital future.

After all, he said, chips are rigid – and so are the devices into which they are placed. "If you think about an iPhone," he said, "it's a wonderful tool, but what if you wanted to take this kind of device functionality and wrap it around your brain?"

That "wrapping" would require a new form of brain/tissue interface than that now used by neuroscientists, who interface silicon chips with the human brain by mounting a chip on a substrate that has an array of silicon spikes of various lengths, calibrated to reach specific parts of the brain.

"You take that combined system and you use an air hammer to mount it onto the surface of the brain," Rogers explained. "Problem solved. Now you have a way to accommodate the geometry mismatch between planar and curvilinear because each one of these pins can penetrate to a different depth in the tissue." 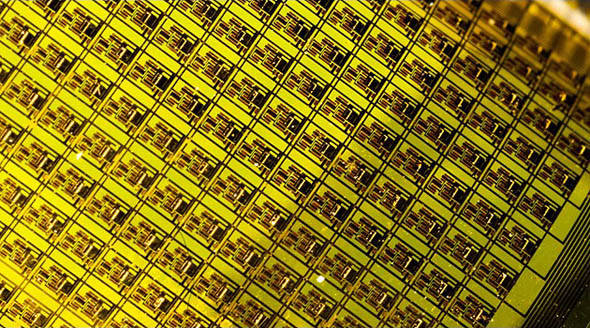 Flexible, conformable bio-integrated electronics could be used, as with this sheet of sensors, to monitor heart activity

But the problem really isn't solved all that well. "Of course there are disadvantages associated with that [technique]," he said, "because you destroy the tissue to some levels during the implantation process."

Not only is the destruction of tissue a problem, Rogers said, but there's the "more insidious" problem of the disparate mechanical properties of a silicon device and the brain itself. "Now you essentially have a shard of glass, a sharp pin of glass in a bowl of jello," he said. "And the jello is not static – it's swelling, it's de-swelling, it's rattling around in the head as you walk around."

That rattling around, he said, creates a persistent irritation between the brain and the device, and an ongoing deterioration of the connection due to that irritation.

Referring to the "shard of glass" method of brain/silicon interface, Rogers said, "I don't want to denigrate this. This has been the workhorse for neuroscience research for a couple of decades and it's likely to remain an important part of the toolkit going forward."

But it's not an ideal way to marry microelectronics with the brain – or, for that matter, with any other soft biological tissue. The trick, he said, is to create an interface that is soft, stretchable, shape-conformable, and biocompatible with living tissue.

Accomplishing that goal doesn't require dumping silicon and moving to organic polymers, graphene, carbon nanotubes, or some other material. Rogers and others explored those possibilities for a few years, but he came back to silicon.

One of the reasons that silicon proved to be the best substrate for his bio-integrated devices, he explained, is the simple fact that bendability is a function of thickness, with stiffness increasing by a factor equal to the cube of the thickness.

In other words, when you create a sheet of silicon that thin, it's highly flexible. "It's nothing but Newtonian scaling," he said, "when you change a parameter like that, by 15 orders of magnitude, it really changes the way you think about the system."

Unfortunately, however, silicon sheets that thin are quite fragile, so they need to be bonded with a less-fragile substrate such as plastic or rubber. Fortunately, the thinner the silicon, the easier it is to bond with another substance without different thermal expansion rates of the two substances causing problems.

What's more, the silicon and its substrate will bond merely by their intermolecular van der Waals forces. No muss, no fuss.

Next page: Flexibility is fine, but what about stretchability?
Page: