Another Apple maps desert death trap down under

'Mount Isa' is 141kms from the actual town

Just when Apple thought it couldn't get any worse for its beleaguered Maps app, which has been leading motorists deep into the desert when they try to find the town of Mildura, The Register can reveal another SNAFU that could send travellers to an even less hospitable destination.

The site in question is Mount Isa, a town in the interior of Queensland. Famed for its colossal mines and attendant facilities, the town is home to around 23,500 souls.

While not a tourist destination of note, the town is popular stop on the sole and very long road linking Australia's Northern Territory to Queensland. Mine tours attract some visitors, while the nearby gulf country is a magnet for those who enjoy fishing in extreme environments.

The city is famous for claiming an area of 43 310 km2 as its own, an administrative nicety that means “within the Mount Isa City boundary is the town of Camooweal  … approximately 200 kilometres to the west of Mount Isa and its main street is actually the highway, making it the longest street in the world,” according to the town's website.

But even the city's enormous size doesn't explain why iOS 6 maps places the town in the spot depicted below, which appears to be miles from anything of note. Google Maps, for what it is worth, places the nearest road to the spot Apple picks for the town as being 141 kms from downtown Mount Isa. 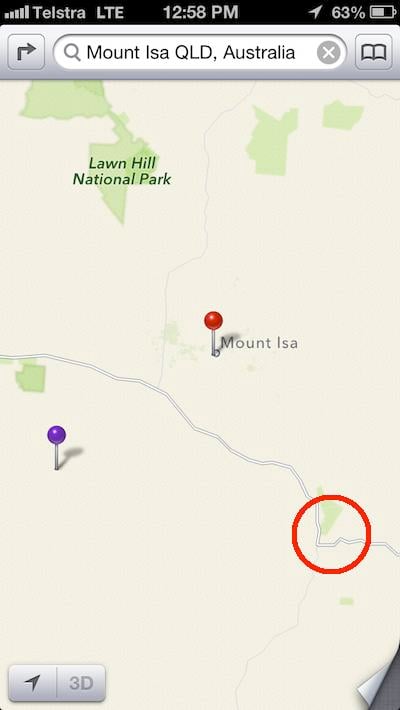 The red pin is Apple's location for Mount Isa. The red circle is the town's actual location

Directions offered by the app also send drivers coming from the west to the wrong spot, as the screenshot below shows. 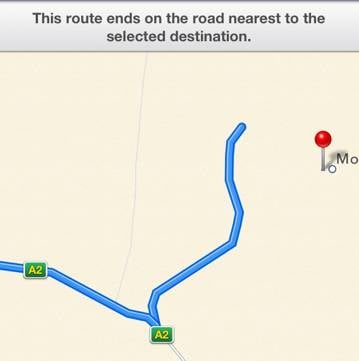 Requesting directions from Darwin to Mount Isa produces the map above

Here at Vulture South we're struggling to figure out why iOS 6 maps has picked this spot as Mount Isa, as other online mapping sources offer no hint of anything being present in the spot Cupertino has chosen. Nor do the five locations offered as the site of Mount Isa by Geoscience Australia's place names search tool, which scans the nation's Gazetteer, yield the same results as Apple's app.

At least the location is not easily accessible – we can find no road leading to Cupertino's chosen spot – and it's unlikely anyone could mistake Thorntonia Yelvertoft Rd, the nearest thoroughfare en route to Apple's Mount Isa, as the main road to the town of Mount Isa. Even travellers propping their eyelids up with matchsticks after the long haul from the Northern Territory would surely be deterred by the sign below, which as Google Street View shows makes it plain that a turn up Thorntonia Yelvertoft Rd won't lead to Mount Isa. 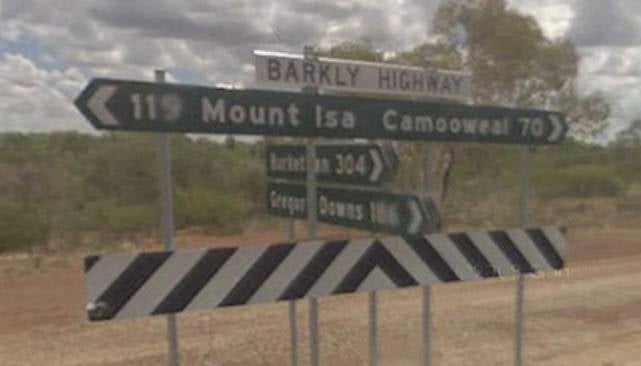 The sign at the intersection of the Barkly Highway and Thorntonia Yelvertoft Rd
Source: Google StreetView

It's also worth noting that visitors to the area will find it hard to avoid cautionary advice about the perils of running out of fuel, food and water in the area. Odd-seeming directions are therefore less likely to be heeded, such is the area's remoteness.

It is conceivable, however, that iPhone owners could use the app in the relevant areas, as Australia's dominant mobile carrier Telstra claims it provides 3G service close to Apple's version of the town. ®

1. Mount Isa was the first place Vulture South thought to look up in a quest for other errors in Apple maps. We shudder to think how many other out-of-the-way places are wrong in the app.

2. Several commentards on this recent story have taken El Reg to task for not noticing that the Mildura Regional City was the centroid for a local government area, nor for ignoring other "Mildura" entries in the discussion.

Yes, Vulture South could have observed the existence of the council boundary but at the time, it didn't occur to us. As for other entries than Mildura and Mildura Regional City, it's fairly easy to eliminate a mine, school, railway station, airport from the dataset. In any case, our humble hack's observation was drawn from querying the Gazetteer database directly - select * from Gazette_2011 where name="Mildura" and state_id="VIC" - which is somewhat tighter than the online search.

Finally, a full GIS tutorial including the difference between a centroid and a point was considered beyond the scope of the discussion! - RC, for this bootnote.