Dell shoots for number one in servers, adds OpenStack to public cloud

Ex-Prez Clinton preaches optimism, and R&D spending, to the multitudes

Dell World 2012 It is Dell World day two, and company founder, chairman, and CEO Michael Dell took the stage a half-hour late to talk, once again, about the repositioning of the company that bears his name to be a bigger player in the IT racket.

He also invited former President Bill Clinton, who spoke for what seemed like about three hours about the things that were wrong with the world and how we all need to work together, internet-style, to make it better.

As an IT sports writer who happens to like systems, the System of All Systems is, of course, the world economy and how people, technology, money, and raw materials mash up to give us all livings and products.

And if you are a policy wonk with a systems bent, listening to Clinton go on for an hour and a half about how he sees this system breaking down and how to fix it is surely more interesting than whatever server and cloud announcements Michael Dell was going to talk about. But this is an IT pub, and we take care of business first.

In his keynote, Dell, the man, said that as of the third quarter of this year, Dell was the number one server supplier in North America and had taken the number one position in Asia, too. Dell meant in terms of shipments, not revenues, of course, with IBM selling $3.5bn and HP selling $3.3bn of machines compared to Dell's $2.1bn. But, Dell counts share by shipments, and said it was only 64,000 machines behind market leader HP.

"So if everybody here buys ten servers, I think we've pretty much got it," quipped Dell, saying that Dell, the company, had been gaining share for quite a long time with competitors moving in the opposite direction.

That's true enough. But Dell doesn't have expensive and sticky mainframe and Unix systems from which to extract disproportionate profits, either.

"If you look at the trajectory, we are on a path to become number one worldwide in servers within the next few quarters."

That's not news so much as throwing down the gauntlet at HP CEO Meg Whitman's feet. The real question is not when Dell will ship more boxes, but when it will rival HP and IBM in terms of revenues.

If you really want to think linearly (which is foolish even if it is fun) then by mid-2016 or so HP and Dell will switch revenue streams on servers. These are not predictions, mind you, but rather more like the limits of possibilities.

It is hard to imagine all conditions remaining the same to sustain these trends in a linear fashion. The world just doesn't work that way. And if it did, we'd be spending $150bn a year on servers by now, which we most certainly do not. 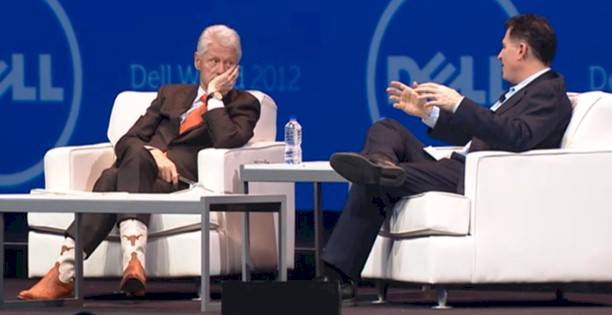 The other big news coming out of Dell World today, which Dell, the man, didn't even bring up, was that the company was getting behind the OpenStack cloud control freak developed by NASA and Rackspace Hosting as the basis for its own Dell Cloud public infrastructure cloud as well as private clouds, which it calls Dell Cloud Dedicated.

The Dell Cloud launched back in August 2011 and comes out of its Services group. The initial cloud was based on VMware's ESXi hypervisor and vCloud Director control freak. And back then, Mark Bilger, VP and CTO at Dell Services, told El Reg to expect an "open source cloud" in 2012 and another one based on Microsoft Azure before the end of the year.

Everyone was pretty much guessing that Dell would lean more towards OpenStack and less towards CloudStack and other alternatives available in the market, especially since it has been peddling custom OpenStack clouds to data center customers on top of its hyperscale PowerEdge-C servers for nearly two years now.

Now that the "Folsom" release of OpenStack is out, which is arguably the first usable implementation of the cloud control freak, Dell is now ready to build a portion of its own Dell Cloud public cloud on top of OpenStack. But you go first. Dell is at first rolling out a tech preview of the Dell Cloud Dedicated, a mix of boxes and software all configured with Ubuntu Server, the KVM hypervisor, the OpenStack control freak, and Dell's own Crowbar configuration tool.

Interestingly, in the kitchen sink announcement Dell made, it said that for the third quarter of fiscal 2013 (its most recent quarter) were up 30 per cent, and it also added that OpenStack would be "Dell's primary platform."

It is not hard to figure out why. Dell will get the cash for supporting OpenStack, which is free and open source, while VMware will get most of the money from any cloud based on ESXi and vCloud Director, which is not.

It is also interesting that the announcement did not mention the VMware-based chunk of the Dell Cloud public cloud that has been running in Plano, Texas since October 2011 and the other chunk running in Dell's Quincy, Washington, data center and yet another chunk that was fluffed up in Ireland to serve Europe.

But Stephen Spector, cloud evangelist at the IT supplier, did remind everyone in a blog post today that these three VMware-powered regions of the Dell Cloud are up and running.

Spector said that Dell would be opening up Dell Cloud regions in Asia, South America, and in other parts of Europe next year. And the question, of course, is this: How many of those 10 million SMBs who buy servers from Dell today and barely use them are going to just say to hell with it and buy a slice on the Dell Cloud instead?

And just what does that to do Dell's server market share. Does the market share count if you build your own servers and sell them to yourself?

Next page: It's the internet of things, stupid
Page: