Bookmark it, frustrated fanbois, for when iCloud evaporates

Apple has quietly unveiled a more detailed way for users to check on the health of its various and sundry iServices.

And yes, before you ask, the green square does have rounded corners.

Formerly, Apple lumped multiple services under a single trouble indicator, but now users can check the status of 32 individual iOfferings, from iCloud.com to iChat to iMessage, including many services that don't begin with Cupertino's favorite vowel, such as Siri, FaceTime, Game Center, and more. 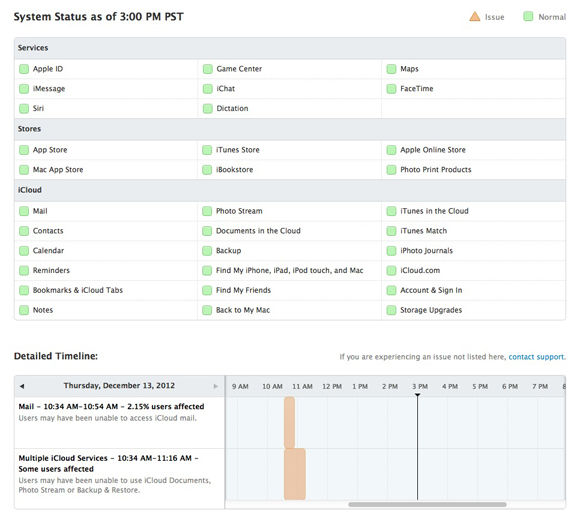 As of 3pm this Thursday Pacific Time, there was no trouble in paradise (click to enlarge)

In addition to the binary Issues/Normal tattletale icon, the page also includes a detailed timeline – entitled, reasonably enough, Detailed Timeline – of past and, presumably, present problems. On Thursday between 10:34 and 10:54am, for example, 2.15 per cent of users may have not had access to their iCloud mail.

There has been some chattering amongst the chattering classes that the reign of Apple CEO Tim Cook might see more openness from One Infinite Loop. If this new, more detailed and straightforward status-indicator page actually does honestly and quickly report trouble in walled-graden paradise, The Reg warmly welcomes it.

But we must duly – if a bit unkindly – point out that on Thursday afternoon there was no Issues icon next to Maps, despite the cries of many users that Apple's Maps service does, indeed, have issues aplenty. Even Cook himself, we gently remind him, said in reference to the crap Maps app flap, "We screwed up." ®