The Hubble space telescope has taken its longest look back into the beginnings of the universe and found seven galaxies formed less than 600 million years after the Big Bang, including one that may be the earlest ever seen.

The galaxies are in a zone that was formed when the universe was just 4 per cent of its current age and the closest one is an estimated 380 million years post-Bang, corresponding to a redshift of 11.9. This was at a time when the first clouds of cooling hydrogen were clumping together and igniting into stars (highlighted in the image below.)

Hubble was used to scan a section of the Ultra Deep Field data captured between 2003 and 2004, and a team led by Richard Ellis of the California Institute of Technology made their observations using its Wide Field Camera 3 at the very limits of its capabilities.

"It's been a triumph of Hubble I think," said Ellis. "We've managed to push Hubble really as far as it can go in looking back into the universe."

Ellis and his team won the time on Hubble in a competitive bidding process for the project back in 2011, but deferred on shooting the image until it could get an uninterrupted six-week period to take images with a variety of filters. Ellis described the atmosphere as tense when the data came in this August, but it proved perfect. 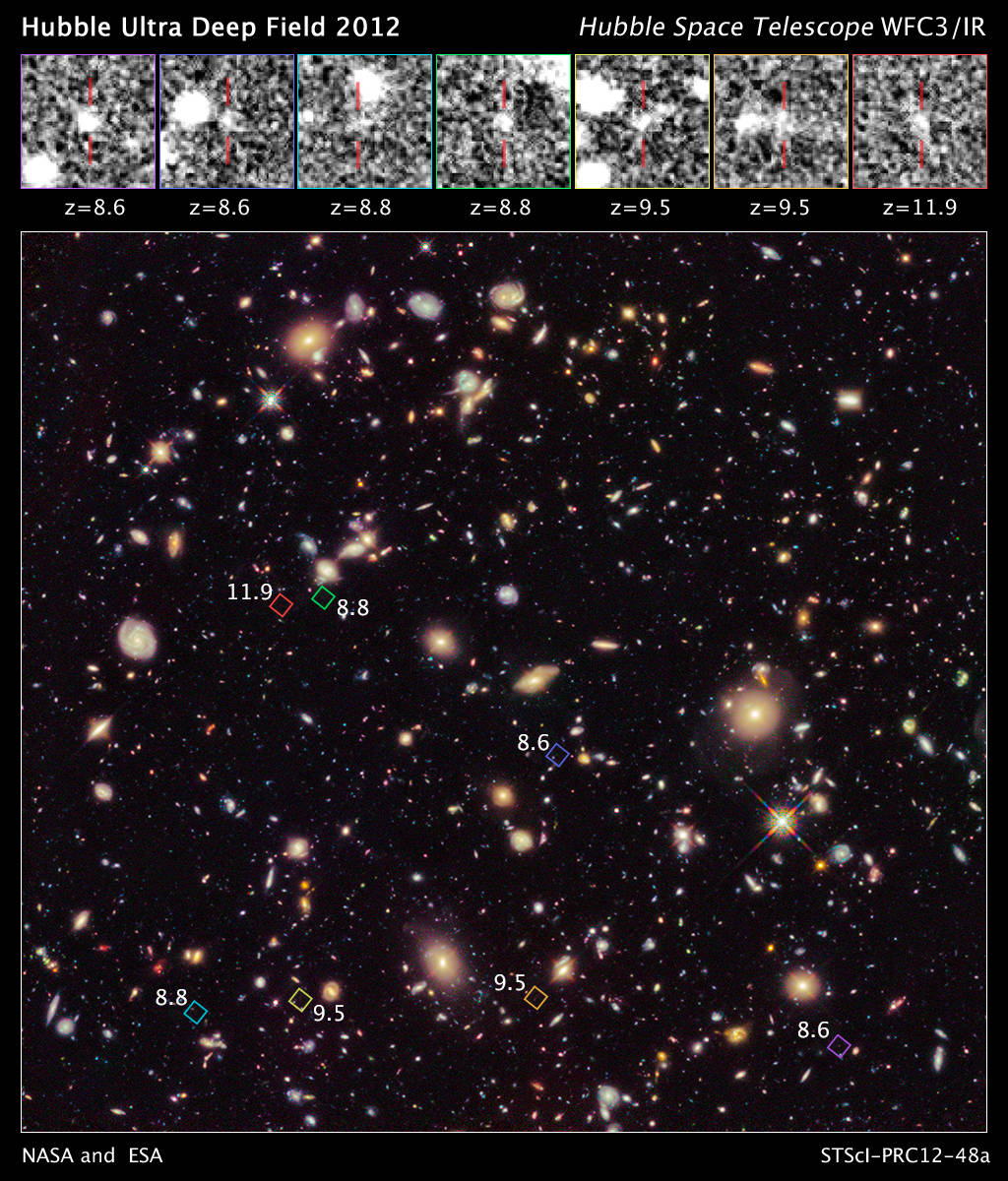 Oh my god, it's full of stars! (click to enlarge)

The seven earliest galaxies were part of the first wave that "re-ionized" the universe by breaking down the hydrogen to form the other elements found today. Scientists are keen to see whether this process was a series of large galactic ignitions or lots of smaller ones. The latter appears somewhat more likely, Ellis said.

"What we find is that at this early time there are many more intrinsically faint galaxies than we see in the present day universe, and that's a very important result," he said. "These abundant and very feeble galaxies do the main job we think of re-ionizing the universe."

"This is the time where the universe started to make stars and galaxies that made the chemical elements that we are literally made out of; the oxygen we breathe, the iron in our blood, the calcium in our bones - this is the beginning of everything," said John Grunsfeld, NASA's associate administrator for science, in a press call. 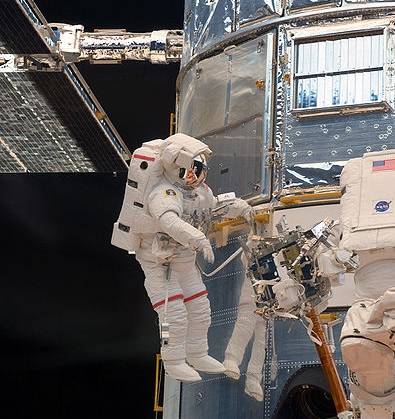 Grunsfeld gets hands on with Hubble

Grunsfeld has a special attachment to Hubble, as he was the last human being to touch it while doing the final upgrade in a 2009 spacewalk. The Atlantis mission crew installed the Wide Field Camera 3 used in today's findings, as well as the Cosmic Origins Spectrograph that's currently checking out the Solar System.

The team will now be publishing seven papers on the study, which should be out within the next few months. Ellis said the next step was to check their figures on the 380 million year old galaxy finding in case there's been a mistake in the redshift data.

Still a long way to go (click to enlarge)

"One possibility is that it is a galaxy with a redshift of 2.4 which has a very strong gaseous emission line and it’s possible this line was lying smack bang in the center of this filter," he said.

"If this object was an emission line galaxy then it should have a corresponding hydrogen emission line in the optical. We were able to search for this and we didn’t find it. We're guarded, because it could be an exotic object that has intense emission lines, but on balance we're fairly confident." ®