Funny that, no mention of interwebs in comms treaty...

WCIT2012 As night turned into morning, events took a turn for the strange at the ITU conference, with a vote which wasn't a vote, a resolution which wasn't resolved and an indecent proposal from Russia wielded as a threat.

The non-vote came as 2am approached, with the conference centre being held open while delegates continued thrashing out the treaty. It isn't going well. The Russians and Saudis are down to base threats, promising to resurrect already-expunged proposals if the USA continues to refuse to budge. Meanwhile the Chair is descending into a funk as Member States reject outright text they'd previously approved, and the delegates are reduced to throwing spitballs to stave off looming unconsciousness.

Huge screens adorn the hall, onto which State representatives are projected when they're speaking, and it was a chap sitting behind one of them who was hit with the rolled-up ball of paper. He gazed around dumbfounded while his colleagues desperately tried to suppress their giggles but it wasn't the funniest thing to happen during the day.

It was well after midnight when Saudi Arabia tried to slip in a clause calling for all governments to have an equal role in internet governance, but no one was comatose enough to let that past and the Americans were, by this point, rejecting any mention of the i-word on principle:

The term "internet" has been entirely expunged from the treaty itself, but the ITU had carefully got agreement for a proposal tacked on the end "To Foster an enabling environment for the greater growth of the Internet"... at least it thought it had. The Americans were having none of it, and objected to the entire proposal rather than running through the clauses as had been planned, leaving the audience split.

"I'd like to get a weather of the room," the Chair suggested, asking delegates to hold up their voting paddles to indicate if they wanted to see the new proposal wiped from the record. Votes never happen at the ITU, despite the presence of the paddles system. The ITU works entirely by consensus - which is why it has such a hard time achieving anything. 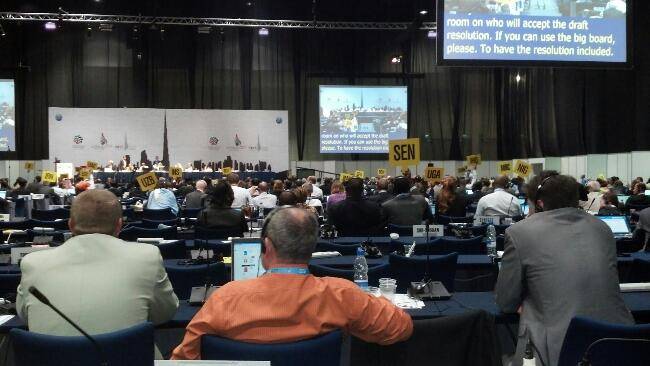 Delegates not voting, or were they?

"The majority are in favour of the proposal," declared the Chair, prompting several Member States to ask for clarification over whether a vote had in fact taken place. The ITU's constitution clearly states that a vote has to be declared before it can be held, but as the meeting broke up immediately afterwards many delegates headed off to bed not knowing if they'd just voted to keep the proposal, or not, or both.

There's one day left to find out, though Friday morning could be utilised if an end was in sight... but the end is far from in sight. All the really contentious issues have been postponed to the last day, and like a teenager's pile of homework there's always the chance that it just won't get done in time.

Anyone wanting to get a feel for the process should try this simple task: take 200 marbles and place 199 of them on a tea tray, then try to balance the tray on top of the last marble. To properly simulate the ITU process, groups of marbles should be working in teams to destabilise the whole thing, but no simulation is perfect. ®